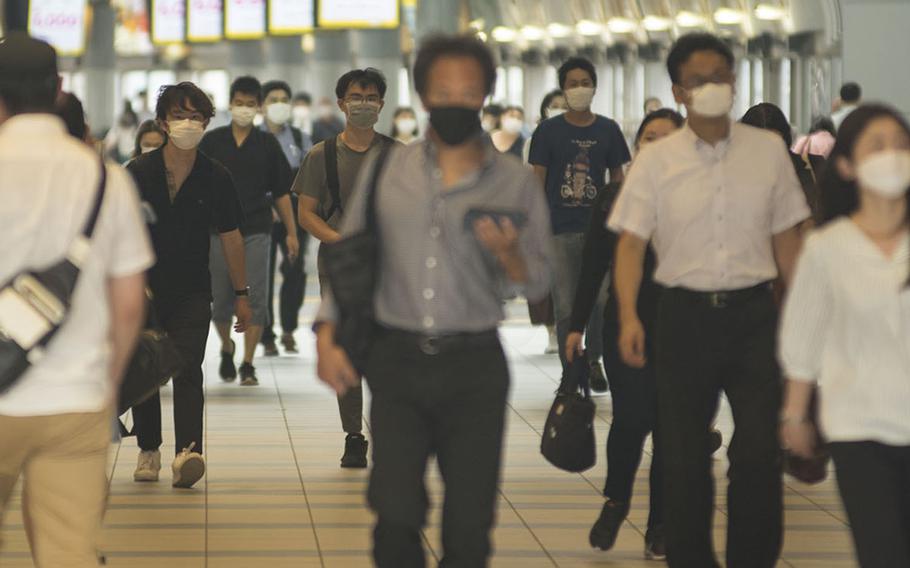 TOKYO — For the first time in days, the number of new coronavirus cases reported by Japan’s capital dipped below 300 on Sunday, the final day of a long holiday weekend called Obon.

Tokyo recorded 260 coronavirus cases on Sunday, according to a report by national broadcaster NHK that cited city officials. Most of the new patients are in their 20s and 30s.

The city logged 385 new cases Saturday and 389 on Friday, the highest number recorded there since Aug. 9, according to the Tokyo Metropolitan Government. The record for new infections reported by the city on one day is 472 on Aug. 1.

Japan’s coronavirus death toll stood at 1,232 as of Saturday, according to NHK.

On Saturday, the Navy announced that three people at Sasebo Naval Base on Japan’s Kyushu island had tested positive for the virus. All were already in quarantine when their infections were confirmed, a base statement said. They will remain isolated until they recover.

Marine Corps Installations Pacific announced four new cases on Okinawa over the weekend — three on Saturday and one on Sunday.

The infections reported Saturday are associated with Camp Courtney, site of a recent cluster outbreak, a Marine statement said.

One the new patients had been identified as a close contact of someone infected in that cluster. The others work at the Camp Courtney chow hall, which was closed temporarily for deep cleaning.

The Marine Corps also announced that 15 people on Okinawa had recovered from the coronavirus over the weekend.

The military typically identifies new patients as members of the base community or base family, without specifying whether they are service members, civilian employees or dependents.