Tampopo omurice, the signature dish at Taimeiken in Nihonbashi, Tokyo, is named after the 1985 food-centered Japanese film "Tampopo." The simple entree is a fluffy three-egg omelet served over a mound of ketchup-fried rice. (Aaron Kidd/Stars and Stripes)

Tampopo omurice, the signature dish at Taimeiken in Nihonbashi, Tokyo, is named after the 1985 food-centered Japanese film "Tampopo." The simple entree is a fluffy three-egg omelet served over a mound of ketchup-fried rice. (Aaron Kidd/Stars and Stripes) Tampopo omurice, the signature dish at Taimeiken in Nihonbashi, Tokyo, is named after the 1985 food-centered Japanese film "Tampopo." Diners are instructed to cut the omelet down its center, revealing its soft-cooked interior. (Aaron Kidd/Stars and Stripes) 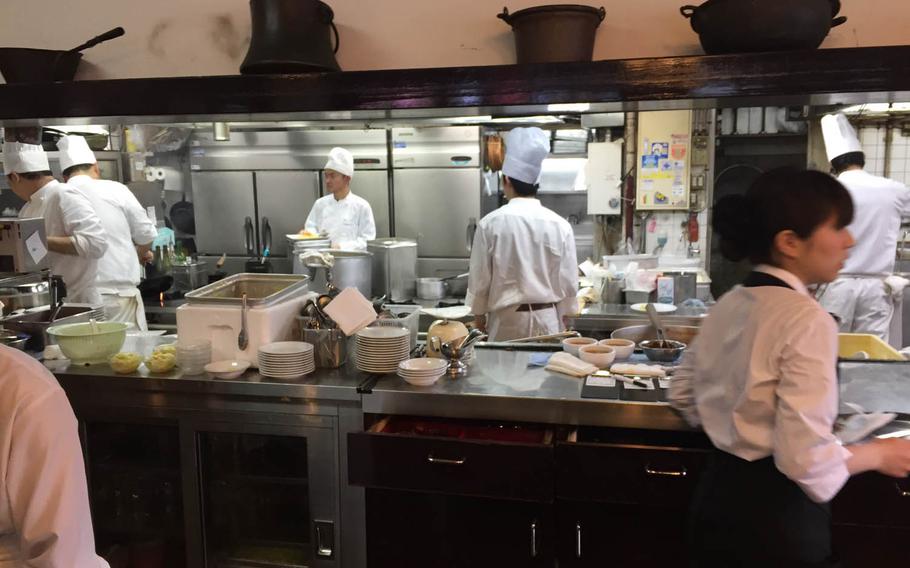 The staff at Taimeiken work through a busy lunch shift April 1 in Nihonbashi, Tokyo. The popular restaurant is known for its Tampopo omurice, a soft-cooked three-egg omelet served over ketchup-fried rice. (Aaron Kidd/Stars and Stripes) 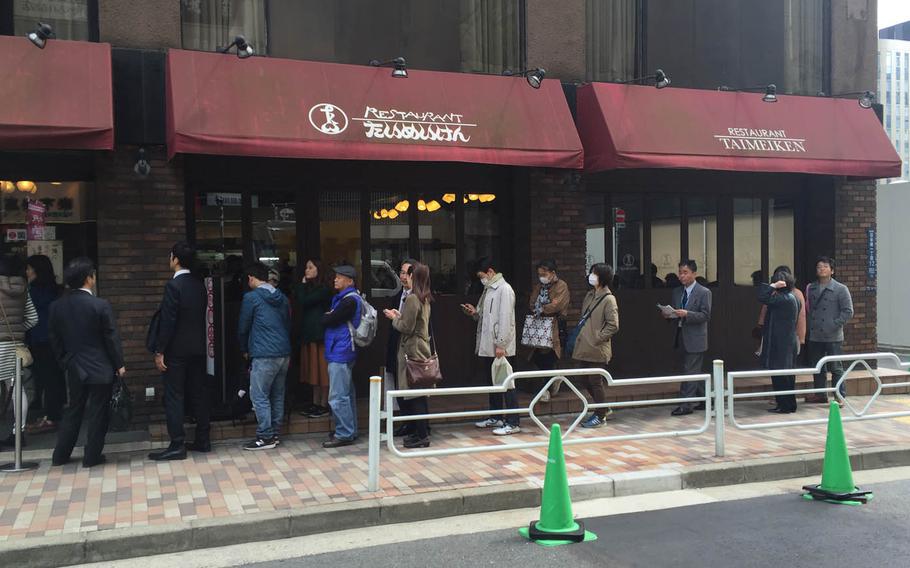 Customers line up outside Taimeiken in Nihonbashi, Tokyo, April 1. The restaurant is famous for its Western-style Japanese cuisine, most notably omurice. (Aaron Kidd/Stars and Stripes)

In a Charlie Chaplin-inspired scene from the cult-classic Japanese film “Tampopo,” a homeless man sneaks into a restaurant kitchen after hours to whip up a fluffy, expertly prepared omelet served atop a delicious-looking mound of ketchup-tinted fried rice.

The dish, called omurice — an amalgam of “omelet” and “rice” — has made countless viewers’ stomachs growl ever since the food-centric comedy from director Juzo Itami debuted in 1985.

Tampopo omurice, the signature selection at Tokyo’s Taimeiken restaurant, which was featured in the movie, has become one of the most sought-after plates of omurice in the world. The scene was filmed in Taimeiken’s second-floor kitchen, and owner-chef Masaaki Modegi’s hands can be seen in close-up shots.

This popular, somewhat pricey restaurant in the Nihonbashi business district near Tokyo Station specializes in yoshoku cuisine — Japan’s take on Western-style food that popped up after 1868 when the Meiji emperor lifted a ban on Western culture. Yoshoku includes hamburger steak, Japan’s take on meatloaf; katsu, a breaded and fried pork cutlet; and various spaghetti incarnations.

Taimeiken offers several incarnations of omurice — beef and prawn, for example — but its Tampopo version (1,950 yen, or about $17.60) is by far the most popular item on the menu, which offers instructions in English for how to eat it: Slice the omelet lengthwise down the center to reveal its creamy, soft-cooked interior (if you prefer well-done eggs, this dish might not be for you). Open the omelet from the middle, letting it envelope the rice. Top it with the sauce of your choice — ketchup or demi-glace — and enjoy.

The perfectly cooked rice, stained pink from a dollop of ketchup added during frying, is prepared with sizable pieces of tasty chicken; however, the delectable eggs remain the star of this melt-in-your-mouth masterpiece.

The only desserts offered are vanilla and green-tea ice cream (500 yen).

Customer service in Japan is usually top notch, and Taimeiken is no exception. My waitress, who greeted me with a smile and an English menu, appeared to beam with pride when she served my meal.

Fair warning: Be sure to arrive early if you don’t want to wait. Lines regularly wrap around the building during lunchtime.

Directions: About a 10-minute walk from Tokyo Station.