Buy Photo
The balcony area at Cafe Hohokam is protected by a retractable awning and plastic curtains to shield guests from inclement weather. Heaters are also posted around the deck in case the air gets a bit chilly. (Eric Guzman/Stars and Stripes)

Buy Photo
The balcony area at Cafe Hohokam is protected by a retractable awning and plastic curtains to shield guests from inclement weather. Heaters are also posted around the deck in case the air gets a bit chilly. (Eric Guzman/Stars and Stripes) 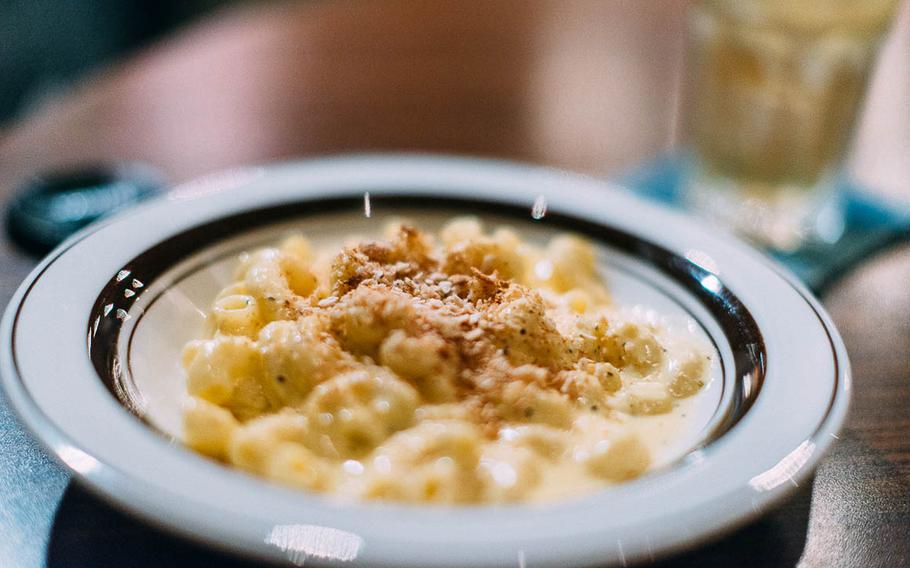 Buy Photo
Macaroni and cheese, topped with breadcrumbs, at Cafe Hohokam in Tokyo are a great alternative to french fries. (Eric Guzman/Stars and Stripes) 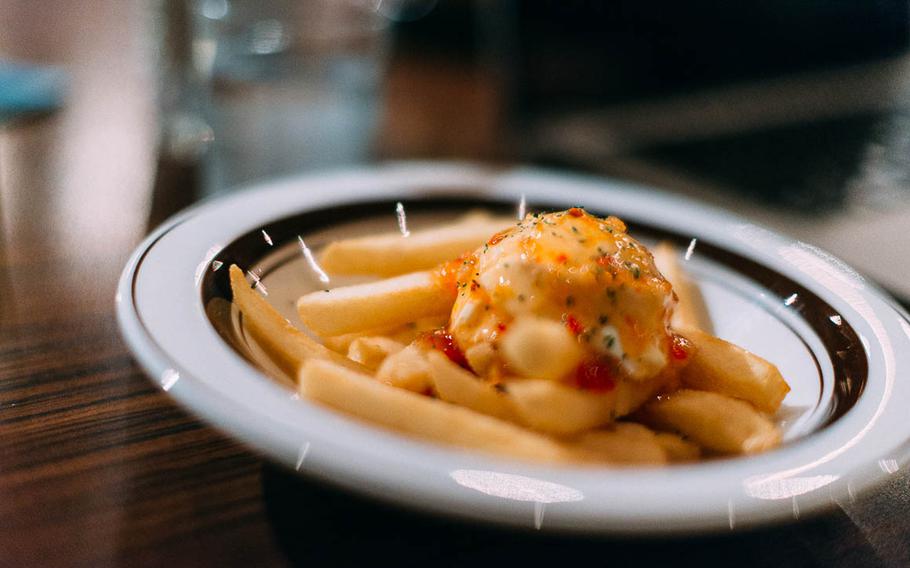 Buy Photo
The sriracha and cream cheese fries at Cafe Hohokam are a treat and a great way to shave time while waiting for meals to come out from the kitchen. (Eric Guzman/Stars and Stripes) 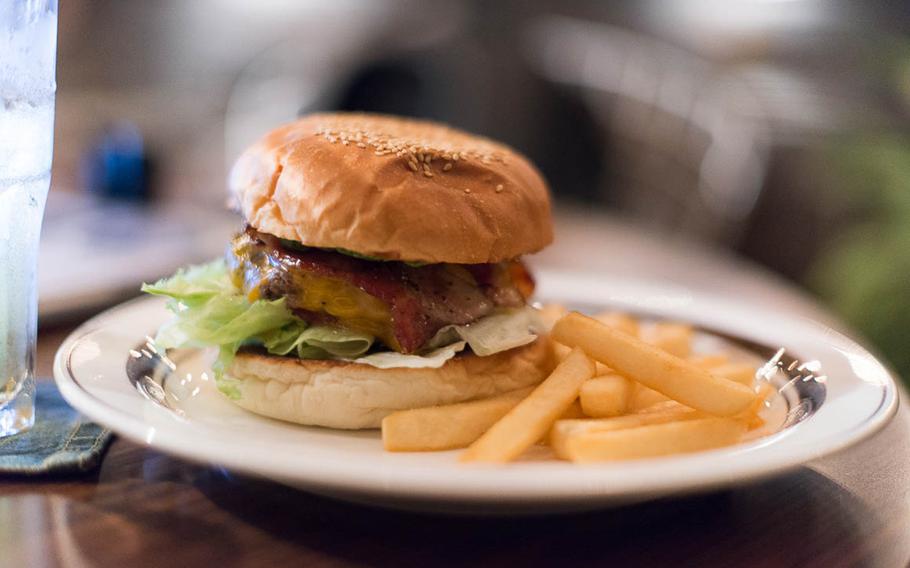 Buy Photo
The bacon and avocado cheeseburger is sure to satisfy customers in need of a big of veggie with their burger at Tokyo's Cafe Hohokam. (Eric Guzman/Stars and Stripes) 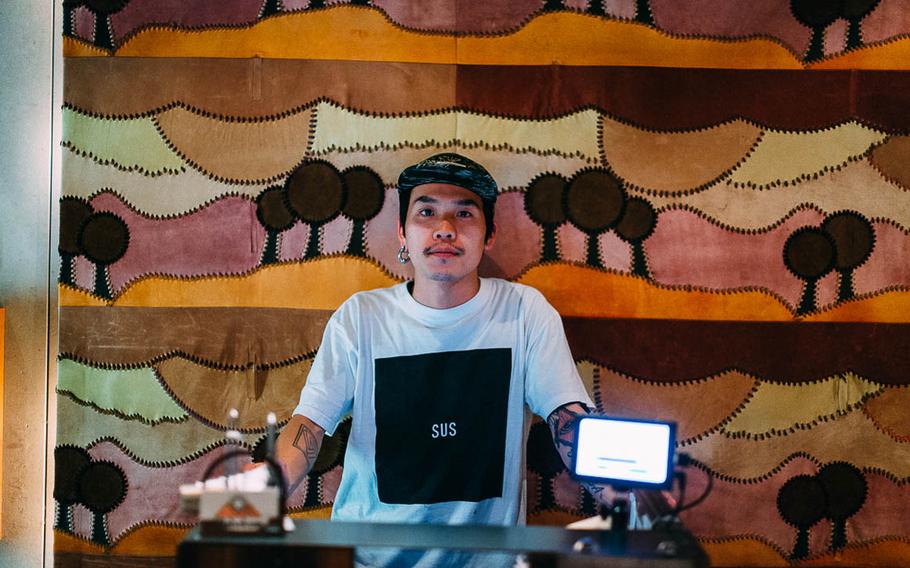 Buy Photo
The staff at Cafe Hohokam are a great help, willing to help with order suggestions and any other headaches that might arise. (Eric Guzman/Stars and Stripes)

A walk down Takeshita Street, just outside of Harajuku Station’s main exit, will show you every quirky bit of Tokyo in a matter of minutes.

Impromptu rockabilly jam sessions, flocks of Lolita-styled teenagers posing for selfie stick-assisted photo shoots, takoyaki and crepe booths ... it’s all there, crammed into a street that takes all of five minutes to walk end to end.

While the sights and scenery are widely pegged as inherently Japanese, their influence comes from all over. The area is peppered with bits of culture from everywhere on the planet, but each dab of worldly color has been adapted to suit Japanese tastes.

Though even in the veritable oasis of cultural quirks that is Harajuku, Western influence has still managed to creep in. However, as has become characteristic of the Japanese, something simple and almost symbolic of another land’s culture — like the hamburger — has been uprooted, changed just a bit and made great.

Cafe Hohokam, found at the end of Takeshita Street, is produced by the folks behind The Great Burger and does not disappoint. The restaurant’s interior hosts an open kitchen and a very cozy dining space that, while a bit on the small side, is better described as intimate than uncomfortable.

There is also balcony seating for larger groups or those who want to enjoy the sunshine. There is a retractable canopy on the deck to shield guests from intense or inclement weather, and heaters posted around the seats in case the chill factor is high.

The menu shows dozens of burger combinations, drink choices, sides and desserts, but there are a few that easily stand out.

Cafe Hohokam’s Baked Apple, Gorgonzola and Bacon Burger was recommended by the staff, and the suggestion was very much appreciated.

The burger was cooked medium, dark all the way through and cool in the center, but the exterior not burned to the point of flavorlessness.

The bun, sourced locally, was soft and dense enough to support the burger and all of its toppings, but not uncomfortably doughy. Easy to chew through, and it didn’t subtract from the overall taste, which is about all you can ask for from a burger bun.

The gorgonzola cheese, sharper and a bit saltier than its marbled cousin, bleu, was quite strong, but it balanced well with the baked apples and bacon.

The apples were spiced just right, and the sweet molasses-like coating contrasted quite well with the strong flavors of the bacon gorgonzola. They weren’t mushy, and the absence of apple skins was not missed one bit.

The fries that come with each meal aren’t really enough to be considered a decent portion by any hungry adult, so supplementary orders are suggested. The fries covered with cream cheese and sriracha chili sauce are a must.

The cheese and avocado burger was also recommended by staff, and while a bit on the tame side in flavor, it was well executed and tasted great.

The heaping portion of avocado piled on top of the burger was very welcome.

Overall, the food and atmosphere were great and it is well worth the visit if you’re looking for a good, old-fashioned American(ish) hamburger in Tokyo.

Menu: In English, and the staff can communicate well enough, so ordering is usually smooth. The monthly special burgers are definitely worth looking into when browsing the menu.

Information: Cafe Hohokam gets busy during the day, and seating is limited inside, but reservations aren’t usually needed for pairs and smaller groups.