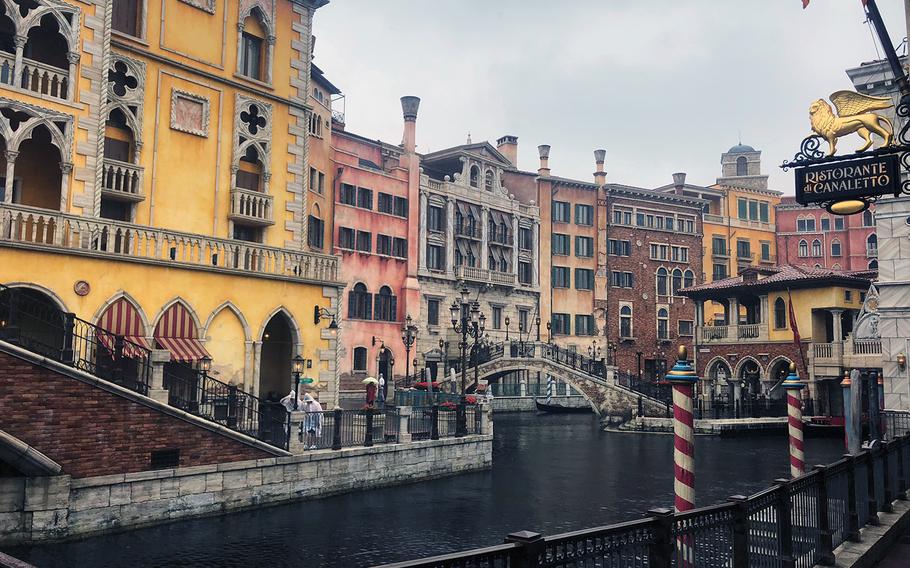 Visitors to Tokyo DisneySea can take a free gondola ride through the waters surrounding the Venetian-influenced Mediterranean Coast near the entrance of the park. (Caitlin Doornbos/Stars and Stripes) 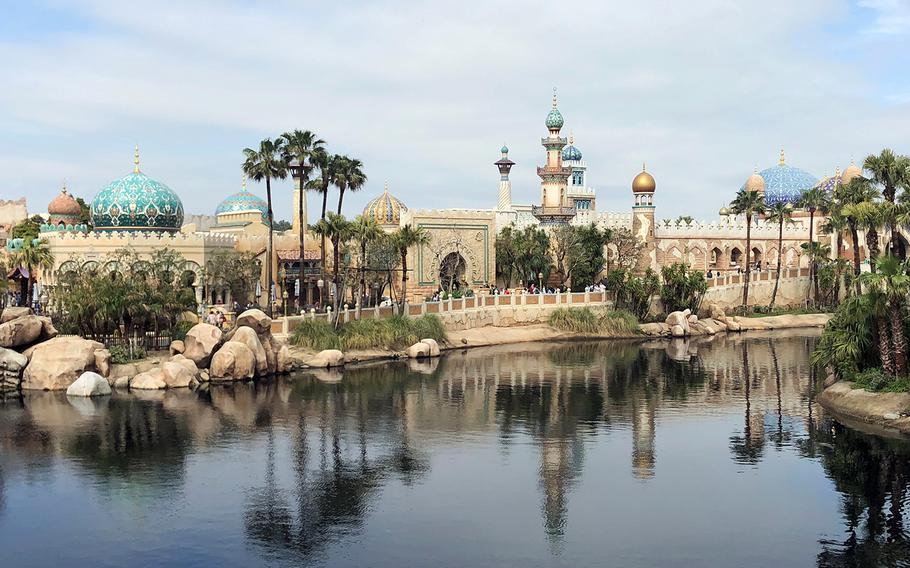 Tokyo DisneySea's Arabian Coast features a rendition of the fictional city of Agrabah from the 1992 animated film “Aladdin.” (Caitlin Doornbos/Stars and Stripes) A fountain in Tokyo DisneySea’s Arabian Coast celebrates Princess Jasmine from “Aladdin.” Tokyo DisneySea is the only theme park in the world with an area dedicated to the fictional country of Agrabah from the 1992 animated feature film. (Caitlin Doornbos/Stars and Stripes.) 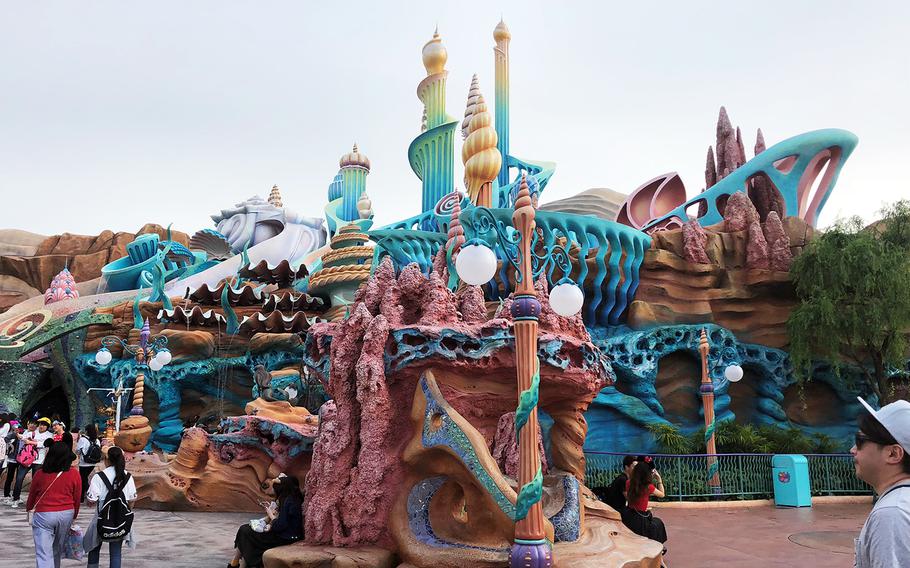 Mermaid Lagoon is built around a towering and colorful “undersea” castle inspired by the 1989’s “The Little Mermaid.” (Caitlin Doornbos/Stars and Stripes)

Nestled along the shoreline of Tokyo Bay, Tokyo DisneySea lives up to its nautically themed name — and its Disney theme park heritage.

The inspiration for the distinct, themed areas of DisneySea came from the concept of The Seven Seas, an ancient phrase used to describe the world’s oceans. The park, which opened in 2001, was initially scheduled to be built in the early 1990s in Long Beach, Calif., as an offshoot of the original Disneyland. However, disputes with local lawmakers led the Walt Disney Company to abandon the plan — only for the concept to be resurrected in Tokyo a decade later.

Visitors to DisneySea will have no trouble spending a full day exploring the park, as there is plenty to see and do. The park offers experiences inspired by locations around the world, from a miniature Venice complete with gondola rides, to tastes of Americana in areas made to resemble New York City and coastal New England villages.

There are also two fantasy realms inspired by Disney classics: Arabian Coast features a rendition of the fictional city of Agrabah from the 1992 animated film “Aladdin,” while Mermaid Lagoon is built around a towering and colorful “undersea” castle inspired by the 1989’s “The Little Mermaid.”

For heart-pounding roller coasters and adrenaline-inducing adventure, head to Lost River Delta. There, thrill-seekers can climb onto the Raging Spirits roller coaster — complete with a 360-degree loop — or escape rolling boulders alongside a famous archaeologist in Indiana Jones Adventure: Temple of the Crystal Skull. Further excitement can be found at Port Discovery, where riders board subterranean vehicles and plunge through a volcano on Journey to the Center of the Earth.

Much like at the neighboring Tokyo Disneyland, American Disneyphiles will enjoy the presence of several attractions from the U.S. theme parks at DisneySea — most notably Tower of Terror, which features an updated storyline that departs from the classic ride’s original “Twilight Zone” theme.

If you get worn out, rest your feet while checking out a show. For a uniquely Tokyo take on Disney, I highly recommend King Triton’s Concert — or what I like to call “aerial Ariel” — at the Mermaid Lagoon Theater. In this show, the beloved undersea princess “swims” through the air above the audience while singing Disney classics, such as “Part of Your World,” in Japanese.

Another don’t-miss show can be found at Arabian Coast’s Magic Lamp Theater, where audiences are treated to a 3D magic show with a special appearance by Aladdin’s mystical sidekick, Genie. This attraction is also in Japanese — but bilingualism isn’t required to appreciate the show’s unbelievable tricks.

For snacks, a range of traditional Disney theme park favorites are available, including slightly smaller versions of the parks’ famous smoked turkey legs and the iconic Mickey Mouse ice cream bars. Unique to the Tokyo Disney parks are numerous popcorn stands, each serving up a different type of flavored popcorn — from basic flavors like salted caramel and curry, to more creative offerings like blueberry and even garlic shrimp. Hungry visitors can purchase a reusable popcorn bucket and receive discounted refills at all popcorn stands located throughout the park.

The best way to cap off any DisneySea visit is with “Fantasmic,” a 20-minute show that takes place on the giant lagoon at the center of the park. The fantastical display features elaborate water floats, dazzling fountains and fireworks, lasers and projections that bring Disney magic to life right before your eyes. Show times vary depending on the season and the day — but the show is usually scheduled for some time around 8 p.m.

If you’re weary of crowds, try to opt for weekday visits. Tokyo DisneySea was the fifth-most-visited theme park in the world last year, pulling ahead of favorites such as Epcot, Universal Studios Florida and SeaWorld with more than 13.5 million visitors, according to the Themed Entertainment Association.

No matter your age, a visit to a Disney theme park can help anyone believe in magic again. DisneySea is a great way to experience a bit of childhood nostalgia in a foreign country, all while making new memories with family and friends an ocean away from home.

Tokyo DisneySeaDIRECTIONS: Tokyo DisneySea can be reached by both public transportation and by car, although taking the train is a more cost-effective and easy journey. The park is accessible at Maihama Station via the JR Keiyo Line — about 17 minutes from Tokyo Station. From Maihama Station, visitors have the option of walking to the park’s entrance (15-minute walk) or taking the Tokyo Disney monorail (10-minute loop). By car, tolls from the West Tokyo area will run about 2,200 yen (about $20) each way. Parking at the park costs an additional 2,500 yen.

COST: A one-day ticket for adults costs 7,400 yen (about $72). Children between the ages of 12-17 are eligible for a Junior Passport, which costs 6,400 yen, while children under 12 are eligible for the 4,800 yen Child Passport. (Children under the age of 3 are free.) Individuals over the age of 65 can purchase a Senior Passport for 6,700 yen. Tickets can be bought at the park, or in advance at Japanese convenience stores, such as FamilyMart and 7-Eleven — often at a slight discount.

FOOD: Numerous restaurants and food stands encompassing a wide variety of cuisine, from Japanese to Western, are located throughout the park.