Buy Photo
Dancers perform during Awa Odori in Tokushima. The event is the premiere event for the region during the Obon season in Japan. (Aya Ichihashi/Stars and Stripes)

Buy Photo
Dancers perform during Awa Odori in Tokushima. The event is the premiere event for the region during the Obon season in Japan. (Aya Ichihashi/Stars and Stripes) 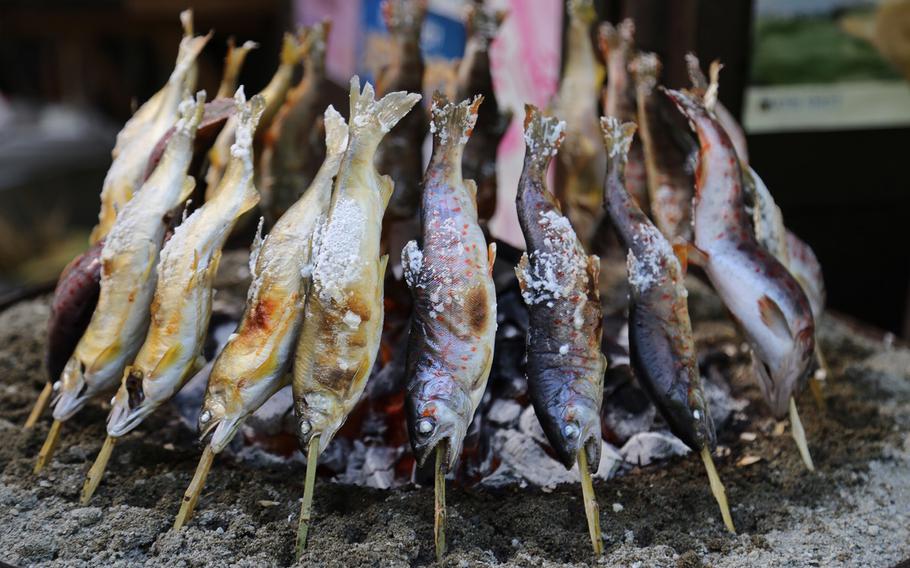 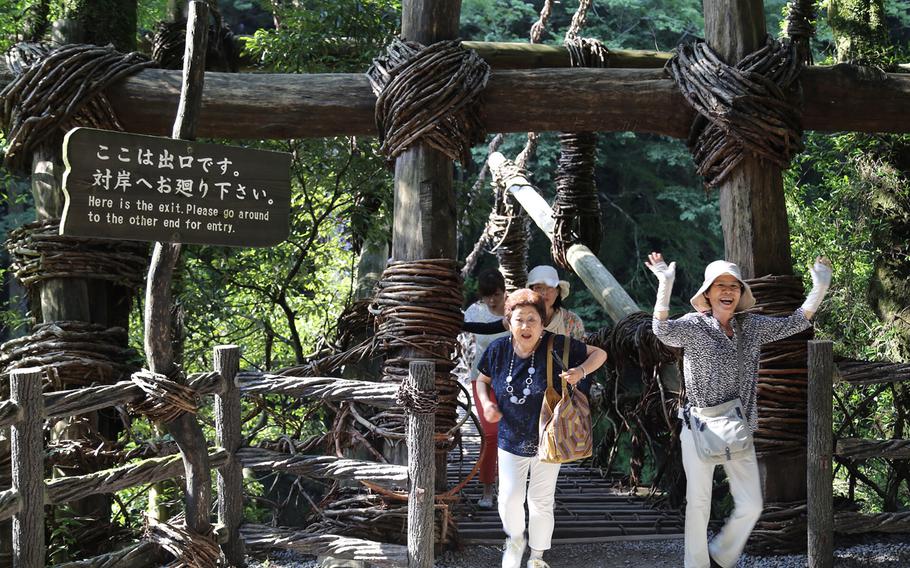 Buy Photo
A visitor to the Kazura Bridge completes the 45-meter walk across the bridge. (Aya Ichihashi/Stars and Stripes) 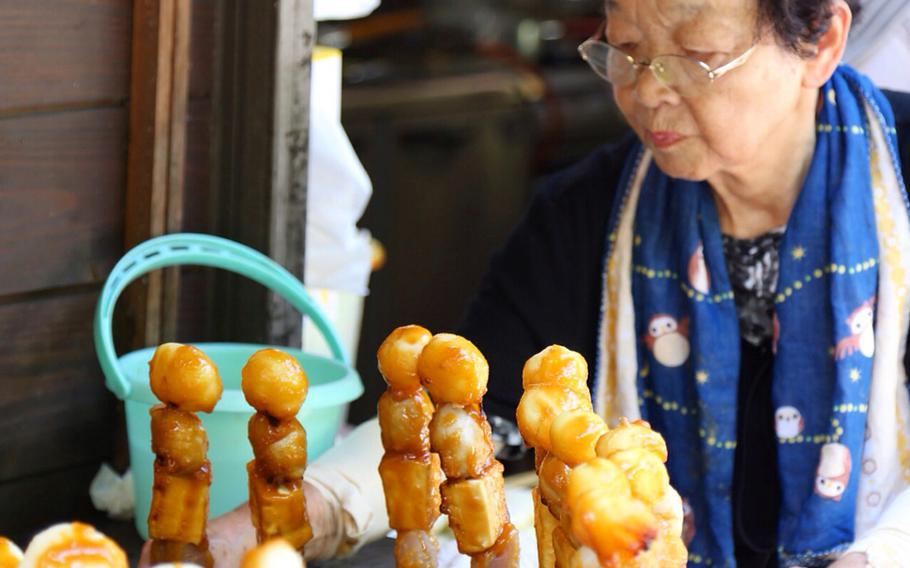 Buy Photo
A food stand employee tends to the sweet miso-grazed dekomawashi roasting on the grill near Iya-no-Kazurabashi. (Aya Ichihashi/Stars and Stripes) 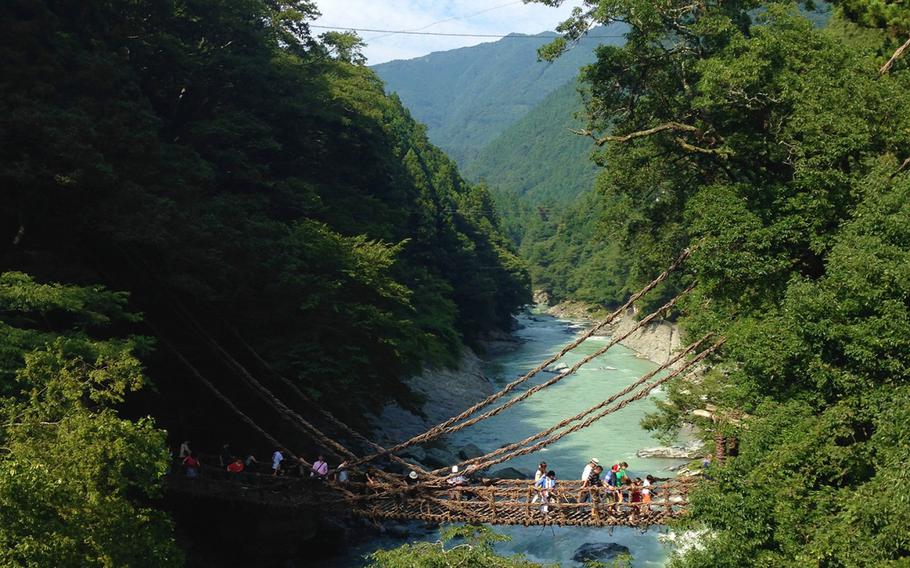 When I think of the main attractions of Tokushima, the prefecture where I was born and raised, a few things come to mind: Beautiful landscapes, historic attractions and a wide variety of unique cultural experiences.

Located on the eastern coast of Shikoku Island just off the mainland, Tokushima is one of the least-populated prefectures in Japan, with about 750,000 inhabitants living in the region as of 2016.

The area is known throughout Japan for its thriving agricultural industry and for being the country’s only producer of indigo — a natural dye famous for its deep, rich blue color. Easily accessible from most points in Japan by plane, highway bus, car or ferry, Tokushima is also famous for its seafood and the local system of onsen, or Japanese hot springs.

However, ask a local about the draw of Tokushima and you’ll soon learn that the area is celebrated for its annual Awa Odori festivities, which are held every August. Awa Odori is a popular dance festival that traditionally coincides with the Japanese festival of Obon, which honors one’s ancestors. During the Obon season, it is believed that the spirits of ancestors come home to visit their relatives.

During the prefecture’s Awa Odori celebration, the population of the capital of Tokushima City swells with tourists — all there to witness the music and displays of dancers.

One of my favorite places in Tokushima is Iya-no-Kazurabashi — a suspended vine bridge made of woven Actinidia arguta vines located deep in the mountains of the Iya Valley in Nishi-Iyayama Village, a two-hour drive west of the capital.

The bridge was an essential throughway in the 1600s for the local villagers. Today, the bridge has been reinforced with steel wires for additional safety, but vines obscure the steel wires as a decorative nod to the bridge’s former glory.

Measuring 45 meters long and 2 meters wide, walking across the bridge is no easy feat. The steps are spaced three to four inches apart, making the river below very visible — so those who are afraid of heights might want to opt for a less-thrilling activity. Crossing the bridge will set visitors back 550 yen (about $4.84) for adults and 350 yen for children.

Not big on adrenaline? Visitors to the Iya Valley can also enjoy hiking to a nearby waterfall and visiting one of the many onsen in the area. There are many food vendors located near the bridge, making this an ideal spot for a light snack or lunch. Among the many items for sale here is dekomawashi — a grilled skewer of charbroiled potato, konnyaku and tofu glazed with miso that’s perfect for vegetarians. Also available is amego no shioyaki, or lightly salted charbroiled salmon also served on a skewer. Both are the perfect introductions to Tokushima’s rich local cuisine.

In Naruto City, about 30 minutes north of Tokushima City, is another natural wonder of the region: Uzushio, or natural whirlpools.

Created when a large volume of water moves between the narrow straits of the coastline during high and low tide, the whirlpools measure as much as 32 yards in diameter. It’s best to visit during the full moon or new moon, as the gravitational pull creates the largest whirlpool effect. Large boats ferry tourists closer to the whirlpools every 40 minutes from 9 a.m. to 4 p.m., costing about 1,800 yen for adults. Visitors can also watch the whirlpools from a nearby bridge observatory.

Tokushima has something for everyone year-round. Whether you’re looking to witness one of the most famous dance festivals in the country, cross a unique bridge, enjoy some local produce or get up close to some of the world’s largest whirlpools, Tokushima makes a memorable getaway.

Tokushima PrefectureDIRECTIONS: Tokushima is easily accessible from many locations throughout Japan. Tokushima Awaodori Airport services regular flights from Okinawa, Tokyo and Fukuoka — with flights ranging in price depending on the carrier and season. From mainland Japan, highway buses provide the easiest and most economical means of transportation. From downtown Osaka, the trip takes roughly three hours and costs 6,700 yen (about $59) round trip. From downtown Hiroshima, the 4.5-hour bus ride costs about 10,300 yen round trip. Buses are also available from cities such as Kobe, Tokyo, Nagoya and Kyoto.

COSTS: Be sure to carry enough cash for smaller purchases, transportation fare and snacks. ATMs are readily available at convenience stores and other locations throughout the prefecture.