Capt. Travis Hairston tosses candy to Afghan children during a visit to Combat Outpost Baraki Barak in eastern Afghanistan. The chaplain had traveled to the base to engage in what Army chaplains refer to as ''ministry of presence.'' (Martin Kuz/Stars and Stripes)

Capt. Travis Hairston tosses candy to Afghan children during a visit to Combat Outpost Baraki Barak in eastern Afghanistan. The chaplain had traveled to the base to engage in what Army chaplains refer to as ''ministry of presence.'' (Martin Kuz/Stars and Stripes) 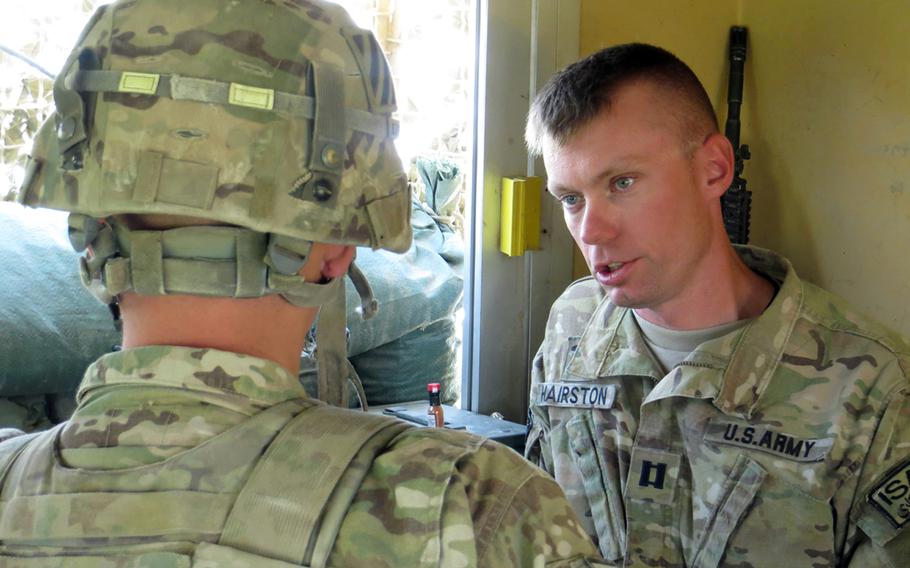 During a visit to Combat Outpost Baraki Barak in eastern Afghanistan, Capt. Travis Hairston, right, consoles a soldier whose wife in America had recently admitted to having an affair. (Martin Kuz/Stars and Stripes)

BARAKI BARAK, Afghanistan — The soldier told the story in monotone, as though hoping to numb himself to his misery.

During a long-distance phone call four days earlier, his wife of less than a year confessed to cheating on him with a member of his unit who had not deployed. Her ragged crying and repeated apologies had neither doused his anger nor staunched his grief.

Capt. Travis Hairston stood listening inside the guard tower where the 22-year-old specialist was on duty at Combat Outpost Baraki Barak in eastern Afghanistan. When the soldier finished, Hairston offered words of solace that were unlike what might be expected of a chaplain.

“If I step back and look at the situation, man, it’s like 40 pounds of suck,” he said. “It’s gotta hurt more than a mule kick in the face.”

“Yeah, it does,” the soldier said, eyes unseen behind dark protective lenses. “I can’t forgive her, at least not right now.”

“Should you right now?” Hairston said. “If you got a sore and someone keeps picking it — it’s gotta scab over first, man.”

He tried to make the soldier feel less alone in his circumstance.

“You’re not the only one this has happened to. I’m talking to about eight, 10 people going through the exact same thing,” Hairston said. He spoke in quick bursts fired through a light Texas twang, his voice rising with indignation.

“Why the hell does someone wait until their husband or wife is on the other side of the freaking world in a war zone to do some stupid (expletive)?” he said. “That pisses me off more than anything.”

The display of empathy and annoyance drew a smile from the soldier. “Yeah, it’s not fun,” he said. “But talking about it with you helps.”

Earlier in the morning, Hairston had flown on a Black Hawk helicopter to the outpost, temporary home of Charlie Troop with the 6th Squadron, 8th Cavalry Regiment. He was here for a few hours to engage in a practice known to Army chaplains as “ministry of presence" — circulating among soldiers to chat, read their mood and, when needed, provide support.

“You want to go where they are so you can have some common ground,” said Hairston, 35, of Lufkin, Texas. “If we didn’t come to places like this, most soldiers wouldn’t see us.”

The village of Baraki Barak lies 50 miles south of Kabul in Logar province. Hairston, a chaplain with the special troops battalion of the 3rd Infantry Division’s 4th Brigade Combat Team, traveled about 10 miles to the outpost from Forward Operating Base Shank, where the battalion is stationed. The Cavalry troop belongs to the 4th BCT, and he had inherited the unit three weeks earlier, after its chaplain left Afghanistan because of a health ailment.

The work of chaplains in a combat zone inspires metaphors that liken their role to a release valve or catch basin. They listen more than they preach. Those who cultivate a ministry of presence serve as roving counselors, adept at creating rapport, undaunted by four-letter banter and mindful that pressing religion on troops can halt conversation faster than a mortar siren.

“I’m a chaplain, so my faith is central to my resiliency,” said Hairston, a Baptist whose uniform bears a patch of a small black cross. “That may not be the case for a soldier. He could shut down if I try to push my faith on him. You have to find other ways of connecting.”

First Sgt. David Mennig greeted Hairston soon after he showed up and gave him the names of a handful of soldiers he thought the chaplain should visit. Past the halfway mark of a nine-month deployment, some were feeling the mental strain of almost daily foot patrols and sporadic firefights. Others were ensnared in personal turmoil.

Hairston deployed in February without a weapon — the Army prohibits chaplains from carrying one — but with a standard-issue high-and-tight haircut and an ethos of pragmatic compassion.

“Men like to fix stuff. We like to see a problem and conquer it,” said Hairston, who is married and has an 8-year-old daughter. “But my name tag doesn’t say ‘God.’ I know I can’t fix their problems. What I can do is share their burden for a little while.”

He approached Spc. Joshua Knestaut, who manned another guard shack, a cramped box built of wood and corrugated metal and fortified with sandbags and a pair of M240 machine guns. Twenty feet below the tower, outside the base walls, a trio of Afghan boys formed a chorus of beggars, pelting Knestaut with one-word pleas.

Knestaut answered their patter while lobbing pieces of candy to the youngsters. They reached toward the morning sun like the bean and wheat crops in the fields behind them.

“Put your shoes back on — your feet stink!”

Hairston joined Knestaut in raining sugar on the children and began asking questions. He learned that Knestaut’s wife had been in the hospital for the past two weeks with a stomach illness that prevented her from eating and drinking.

“How are you handling that? That has to be stressful,” Hairston said.

“Nah, our families got it covered,” said Knestaut, 28, of Plant City, Fla. Relatives were taking turns by her bedside, he explained, and doctors expected her to recover with the help of intravenous feeding. His more urgent concern was the reaction of a handful of soldiers in his platoon to a string of casualties.

The Taliban-led insurgency continues to simmer in Logar and neighboring Wardak province after nearly 12 years of war in Afghanistan. Not long before Hairston’s visit, three Cavalry soldiers were shot and seriously wounded over a 10-day span. (They have since returned to the unit’s base in Fort Stewart, Ga.)

“We’ve got some younger guys who you can tell are having a hard time of it,” said Knestaut, who deployed to Iraq in 2010. “Some of them are getting more withdrawn.”

A short time later, Hairston thanked Knestaut and climbed down from the shack to resume his rounds. He stopped in the kitchen and met Spc. Abdul Newland, a 22-year-old cook who seldom leaves the base but has struggled with anxiety wrought by the unit’s casualties and the occasional mortar strike on the outpost.

“You try to get ready for war before you go,” said Newland, who in 1998, at age 7, emigrated with his family from Sierra Leone to Andover, Md. “But the reality is, you don’t know what the stress is going to be like.”

He sought help from the brigade’s psychologist after he found himself punching walls, brooding for long stretches and unable to sleep more than a dreamless hour or two a night. Opening up about his unease reduced the symptoms, yet a sense of fatalism persists.

“You wonder when something’s going to happen to you,” he said. “I’ll be glad when we’re done. No more mortars.”

Hairston didn’t attempt to convince Newland that a higher power watches over him, or launch into a homily about the inscrutable workings of fate. He instead delivered reassurance worthy of a platoon sergeant.

Referring to the daily tally of insurgents killed by U.S. forces in Logar and Wardak in the past couple of weeks, Hairston said, “It’s pretty much in the double digits. We’re dropping guys like bad habits. So, it’s good.”

Newland laughed. “That’s good to hear,” he said. “Let’s hope that keeps up.”

Stepping back outside, Hairston spotted a sergeant that Mennig had mentioned to him. He had felt a deepening guilt since a member of his platoon had been wounded two weeks earlier during a firefight while covering for the sergeant as he reloaded a heavy machine gun.

“How are you trying to understand what happened?” Hairston asked.

“That’s just it — I don’t know,” the sergeant said. “I just feel like it should have been me.”

Tattooed in loose script on his right arm was a quote generally credited to Plato: “Only the dead have seen the end of war.”

“That’s a normal reaction, man,” Hairston said. “The important thing right now is not to bottle it up. You don’t have to feel like you’re by yourself with this.”

Their discussion went on for several more minutes, and Hairston urged the sergeant to call him when he needed to talk. They shook hands, and afterward, Hairston revealed the self-doubt that trails him.

“There’s always the ‘woulda, coulda, shoulda,’” he said. “I’ll wonder if I should have asked this question or that question, should I have taken the conversation in a different direction, should I have suggested something else to help.” He blew out a breath.

“But, ultimately, what I ask myself is, ‘Did I love these soldiers? Did I honestly try my best to jump into their life and swim a little bit?’ And I believe I do that.”

Later in the morning, he met the specialist whose wife had admitted to an affair. As their exchange neared its end, Hairston said, “So, man, I just want to tell you my heart is breaking for you. I can’t imagine what you’re going through. I’m so sorry.”

“That’s cool. I’ll deal with it,” the soldier said.

“Don’t deal with it yourself, OK? I don’t care where you are, if things get nasty and you need someone to vent to, tell your first sergeant and I’ll be where you are in eight to 12 hours. You’ll do that?”

The soldier returned the chaplain’s smile. “No bullshit.”