Volleyball Athlete of the Year 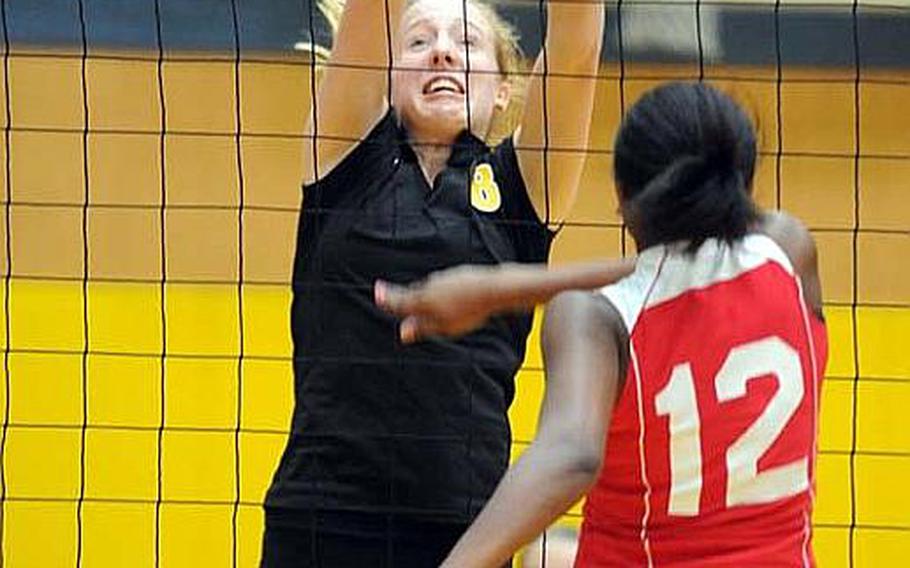 Junior middle blocker Liz Thornton averaged 15.3 spike kills and 4.4 block points as her American School In Japan team made it two straight D-I Tournament titles this month, capped by the Mustangs&rsquo; 25-17, 21-25, 25-20, 25-20 win over Nile C. Kinnick in the tournament final on Nov. 10 at Guam High School.

&ldquo;How Liz goes is how ASIJ goes,&rdquo; said coach Al Garrido of the Red Devils, the only team that ASIJ lost to over the course of the season, just as ASIJ was the only team to beat Kinnick the last two seasons.

&ldquo;If Liz has a good game, ASIJ plays great. But if Liz plays a great game, then ASIJ is unstoppable.&rdquo;

The only blemish on the Mustangs&rsquo; 21-1 record was a Day 2 loss to Kinnick in straight sets in the D-I Tournament, 25-21, 25-22. But that was in division play, which only counted toward seeding. Kinnick earned the top seed and ASIJ the second seed.

&ldquo;I hope we didn&rsquo;t awaken a sleeping giant,&rdquo; Garrido said after that match.

From there, the Mustangs outscored their opponents by 64 points, stumbling only in the second set of the final, to steamroll their way to their second championship in a row.

&ldquo;We slowed her down&rdquo; in the division-play victory &ldquo;and we took advantage,&rdquo; Garrido said. &ldquo;But the second time around, it wasn&rsquo;t the same story. She raised her game and the team raised its game.&rdquo;

And the Mustangs won the title without their coach, Gail Lanier, on the bench; she was struck in the eye by an errant volleyball during warm-ups and Thornton&rsquo;s father, Tim, wound up coaching the team. Thornton after the match said the team dedicated the title victory to Lanier.

While Thornton&rsquo;s older sisters, Catherine (2006) and Gwen (2008) each won MVP awards for ASIJ championship teams, Liz is the only one do accomplish each feat twice.

&ldquo;She&rsquo;s a veteran on that team and she&rsquo;s only a junior,&rdquo; Garrido said.