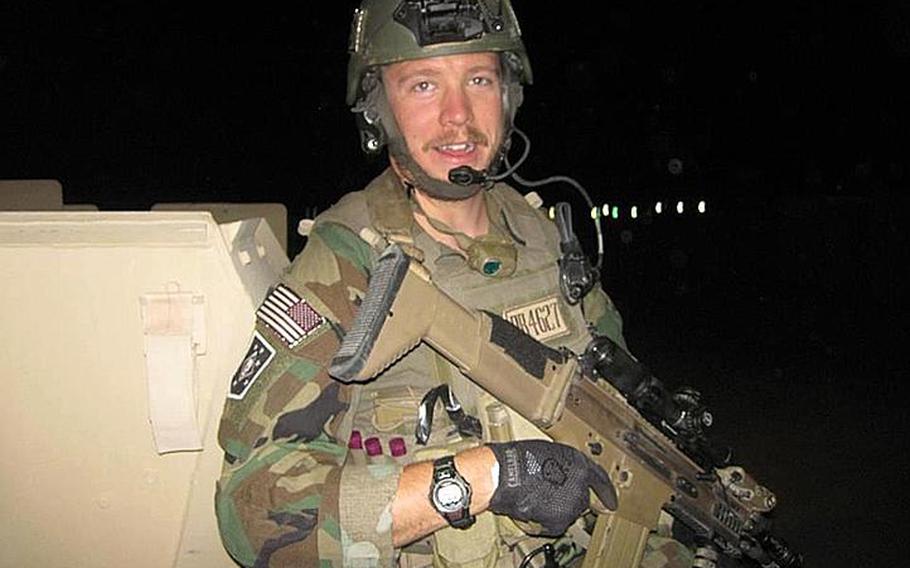 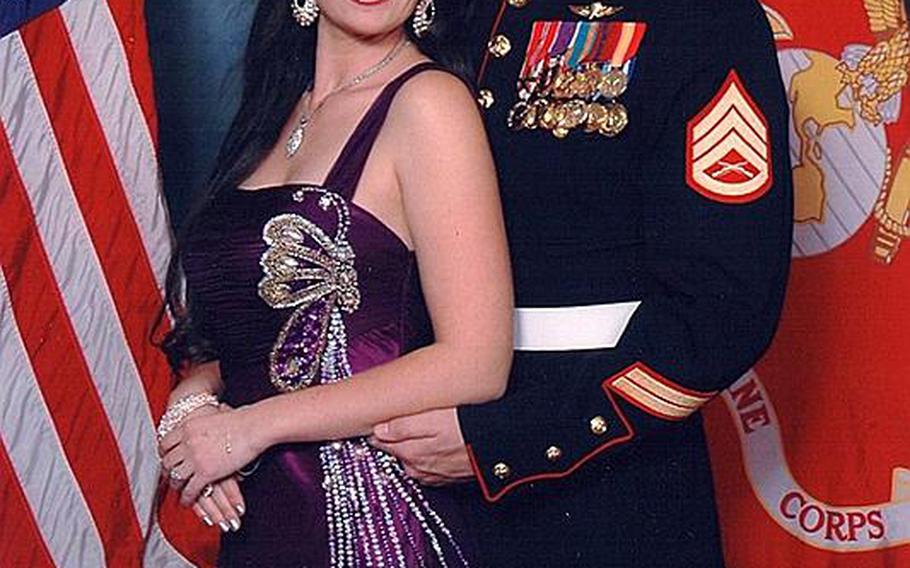 Gunnery Sgt. Daniel Price, seen here with his wife, Rachel, was posthumously awarded the Silver Star for his heroic actions in Afghanistan in 2012. (Courtesy of the Price family) 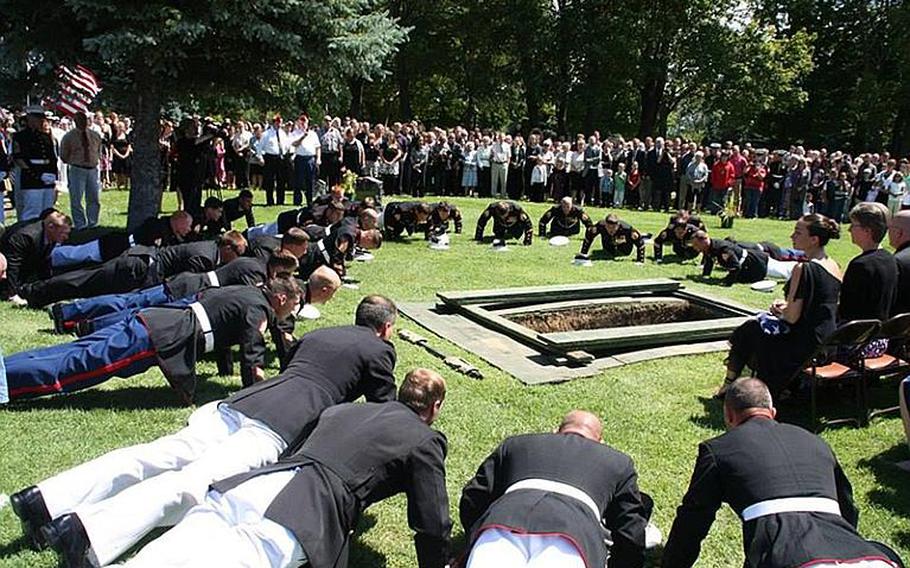 His fellow Marines do pushups at the burial for Gunnery Sgt. Daniel Price in 2012. Price was awarded the Silver Star for his heroic actions in Afghanistan that same year. (Courtesy of the Price family) 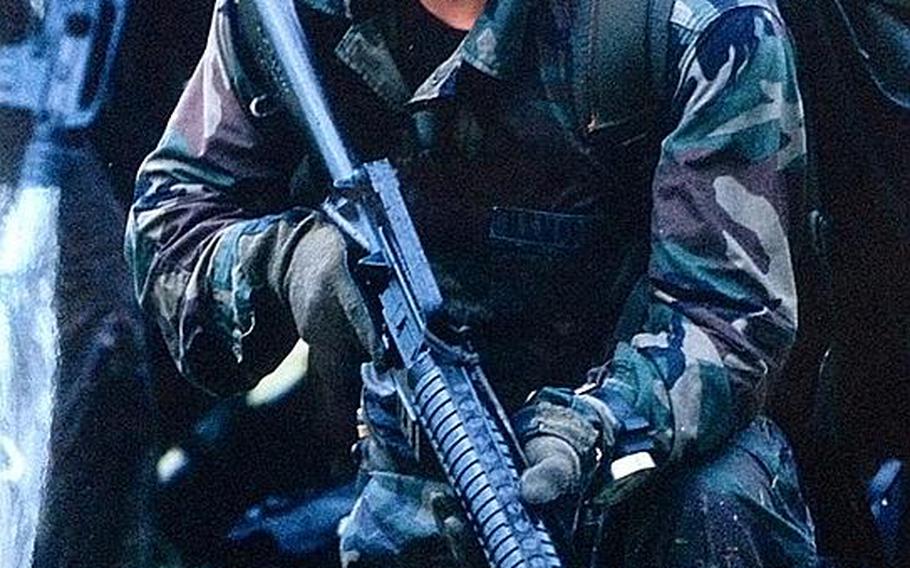 Gunnery Sgt. Jonathan Gifford had been in the Marine Corps for almost 15 years when he was killed in 2012 in Afghanistan. He was posthumously awarded the Navy Cross. (Courtesy of the Gifford family) 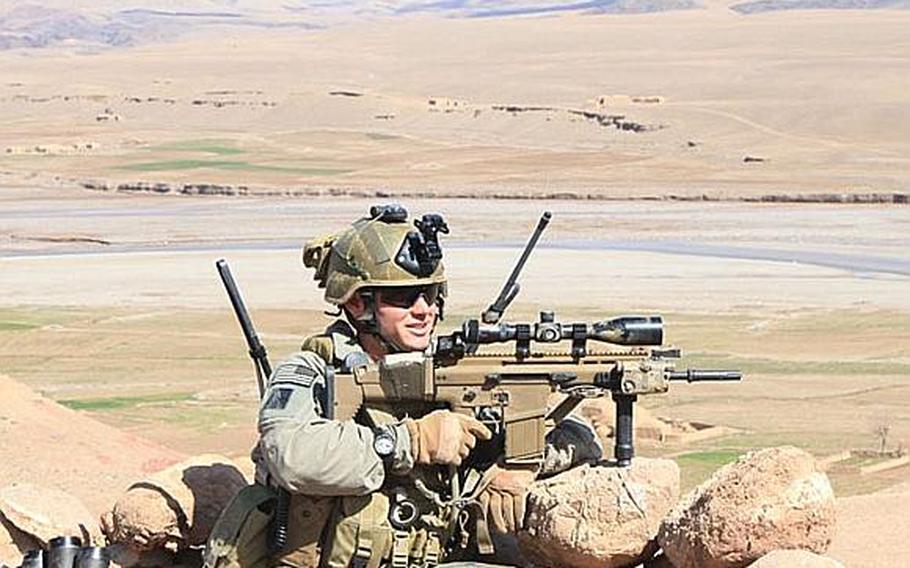 Gunnery Sgt. Jonathan Gifford received a posthumous Navy Cross for his role in a battle in Badghis province, Afghanistan, on July 29, 2012. (Courtesy of the Gifford family)

The Marine advisers were inserted into an insurgent stronghold near Bala Bokan with a unit of Afghan commandos on a cordon-and-search mission, according to Marine officials and their award citations. Almost immediately, machine-gun fire took down a number of their Afghan counterparts. Price volunteered to follow his team chief, Gifford, over exposed ground to the wounded. They rendered medical aid and evacuated the men to safety.

Things continued to deteriorate from there, so they returned to the pinned-down Afghan unit. Gifford and Price rallied the Afghans and led them in taking the fight to the enemy, attacking relentlessly until both fell mortally wounded. Thanks to their selfless heroism, and well-placed grenades, the Afghans were able to break the enemy defense and secure the village.

Gifford would be recognized with the Navy Cross and Price the Silver Star — the nation’s second- and third-highest awards for valor — for their actions that day.

In school, he excelled at soccer and baseball as well as in the classroom. He was a fierce competitor and was extremely disciplined.

He played soccer at Saint Leo College but left to join the Marines in 1996.

“He was just a great kid, a great person to be around,” said Charles Gifford, his uncle. “He was a hard worker; he’d accept any challenge. He was one of those guys, when you meet, you know he’s something special.”

Gifford was originally an infantry rifleman, but that didn’t last long. He sought the toughest challenge the Corps had to offer. He took the Reconnaissance Indoctrination course and was selected, assigned to 2nd Force Reconnaissance Company.

Gifford was honorably discharged from the Marines in July 2001 but came back to 2nd Force Reconnaissance after the Sept. 11, 2001, attacks.

He deployed to Afghanistan and then Iraq. He joined MARSOC in 2006, just months after the unit was activated. There, Gifford served as the chief instructor of the MARSOC Advanced Sniper Course. He joined 2nd MSOB in 2009.

Gifford’s 2012 deployment to Badghis province was his second with the battalion.

Gifford’s brothers in arms said he was freakishly strong despite his compact, lean stature. He never showed fear, not thinking twice before chasing an insurgent into a dark Middle Eastern cave. He was charming and not above pulling practical jokes on friends and family.

“Giff was a natural leader,” said friend Master Sgt. Bryan Maass, of the Methods of Entry School, Weapons Training Battalion. “He was all about the mission and taking care of his people. He’d go without food, sleep, water and necessities to get the job done right and first.”

Gifford led by example, Maass said. He was the honor graduate at both the Sniper and Amphibious Reconnaissance Schools — two of the hardest and most challenging schools in the Marines Corps — yet he never ran his mouth about his accomplishments. He let his work serve as inspiration.

“He was very humble. In fact, all these awards that he’s gotten in the Marine Corps and been considered for — I know him; he’d probably take those and throw them in a drawer somewhere,” Charles Gifford said of his nephew. “He didn’t think of himself as anything special. He was dedicated to the Marine Corps and his country, that’s for sure. He was also a great family man. His (five) boys were everything to him.”

Price, 27, grew up raising animals on his parents’ small farm in Holland, Mich., his mother, Ruth, said. He was a force of nature, with a big laugh and a fun-loving personality. People gravitated toward him, she said.

Price never shied away from hard work or a just fight. He was a dedicated Christian. When he was in second grade, he got into scrapes with bullies as he attempted to drive them off the playground’s one tire swing so the younger, smaller kids could have a turn.

When he was 11, he began working on a neighbor’s pig farm. He worked there until he joined the Marine Corps.

“Dan was born with his work ethic and his warrior mentality,” Ruth said. “Even as a child, Dan was happiest if he had work to do. Dan was tough growing up, but always tender toward the underdog or weakling. He was extremely protective of his little sister, even after leaving home for the Corps.”

Price enlisted in 2003. Like Gifford, it wasn’t long before he too sought out the challenge of reconnaissance.

At the Basic Reconnaissance Course, a fellow Marine collapsed at the bottom of a hill during one of their longer hikes, Ruth said, relaying the words of the collapsed Marine. Price took the Marine’s 80-pound pack on top of his own to help him complete the march.

Price joined Marine special operations in 2008. He deployed six times and the tough battle in Badghis was far from his first. In 2009, he saved 15 Marines and a handful of Afghans after they walked into an ambush. A couple of weeks later he earned the Bronze Star with “V” device for valor for exposing himself to enemy fire to man his vehicle’s MK19 grenade launcher after the weapon system’s remote capability had been damaged.

In July 2011, Price was injured when he took a ricocheted bullet to the kneecap, an injury that could have easily ended any Marine’s career. He worked through the rehabilitation to get back into the fight.

“When Giff’s team took several casualties, Dan practically begged to be allowed to go out with the team and give them a hand,” Ruth said. “He was given permission and he and Giff were both killed on that mission.”

It was Price’s sixth combat tour.

“Honestly, I don’t think I realized how good Dan was at what he did until after he was killed,” his sister, Rebecca Reyenga, said. “To me, he was just my goofy big brother. I teasingly called him ‘Rambo’ all the time and he would just laugh.”

Those who served with Gifford and Price remember them much the same way their families do.

Several told Stars and Stripes they were not surprised by their superhuman exploits.

“Of course I was saddened, obviously, by the loss of my friend,” said former Marine Phil Noblin, who served with Gifford. “But you read something like [his award citation], and if you knew Jon — I knew him pretty well — you kind of chuckled, you kind of shook your head a little bit, and you thought, ‘That son of a bitch; that sounds just like him.’ He was not afraid of anything.”