The Sunday price is right for Vicenza’s natural history museum Buy Photo
Vicenza's Natural History and Archaeological Museum located downtown exhibits artifacts of the area from the Ice Age to the Middle Ages. Admission is free on the first Sundays of the month. (Nancy Montgomery/Stars and Stripes)

Buy Photo
Vicenza's Natural History and Archaeological Museum located downtown exhibits artifacts of the area from the Ice Age to the Middle Ages. Admission is free on the first Sundays of the month. (Nancy Montgomery/Stars and Stripes) 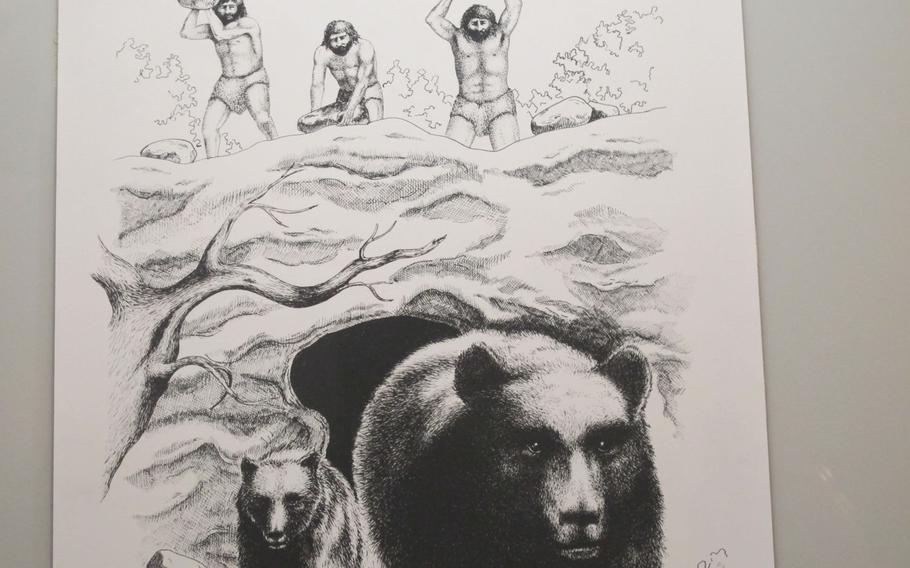 Buy Photo
Vicenza's Natural History and Archaeological Museum offers a special exhibit ''Orsi & Uomini,'' or ''Bears and Men'' through next June. The subject focuses on now-extinct cave bears, which may or may not have been hunted by Neanderthals and/or Cro-Magnons. (Nancy Montgomery/Stars and Stripes) 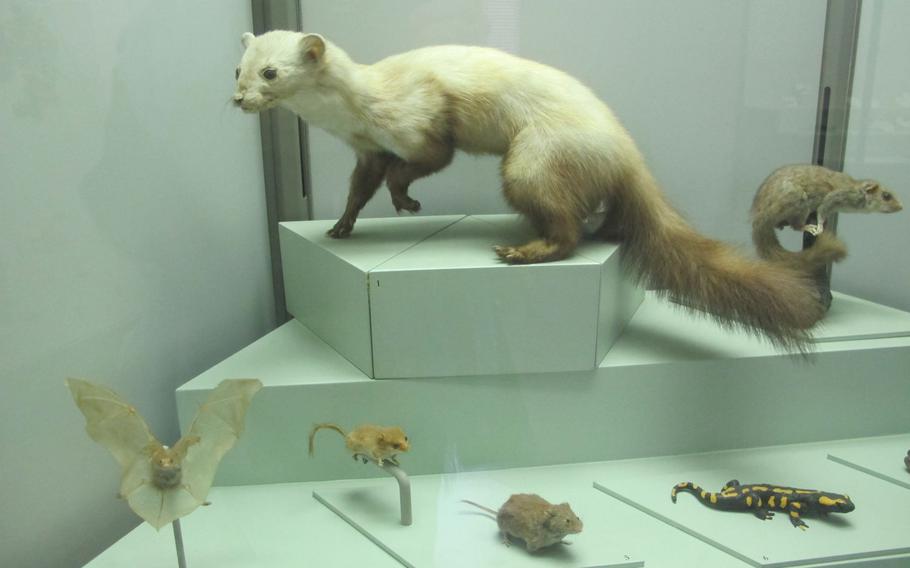 Buy Photo
Some of the exhibits at Vicenza's Natural History and Archaeological Museum seem a bit dated. That little bat is cute, though. (Nancy Montgomery/Stars and Stripes) 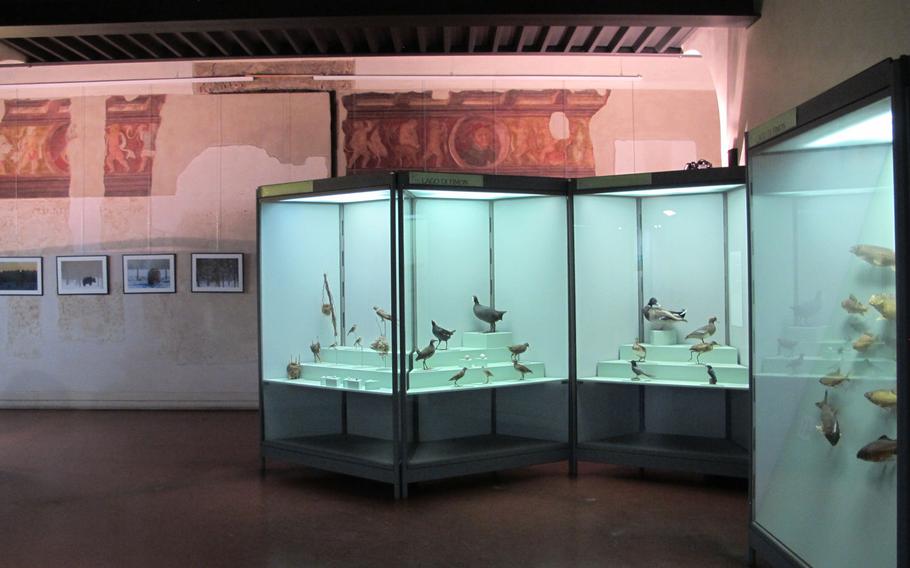 Buy Photo
Vicenza's Natural History and Archaeological Museum includes stuffed birds to display some of the fauna of the region. (Nancy Montgomery/Stars and Stripes) Buy Photo
The highlight of ''Orsi & Uominini'' at Vicenza's Natural History and Archaeological Museum is a skeleton of the Ice Age cave bear, which became extinct some 30,000 years ago. (Nancy Montgomery/Stars and Stripes) 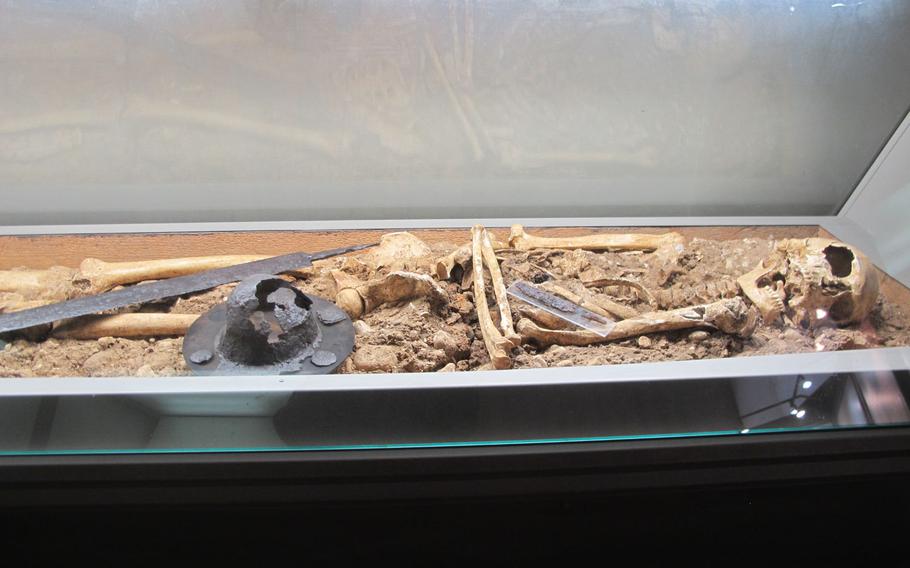 Buy Photo
Vicenza's Natural History and Archaeological Museum includes a human skeleton, complete with weapon, likely from the early Middle Ages when the Germanic Lombards invaded and ruled most of the Italian Peninsula. (Nancy Montgomery/Stars and Stripes) Do you like fossils? How about stuffed owls? Ever seen the skeleton of a cave bear?

Vicenza’s Natural History and Archaeological Museum currently has them all. It presents artifacts of the local area from the Middle Paleolithic era, when Neanderthals roamed Europe, to the Neolithic, when homo sapiens began farming, to the Bronze Age and finally to Roman times and the invasion and reign of the Lombards.

Not that I could read any of the explanatory signs, which are in Italian. But I’d decided to tour the museum on a first Sunday of the month when it’s free. So not understanding a lot of what I was looking at was expected, but not costly.

Parts of the museum, located downtown next to the Santa Corona Church since 1991, seem themselves somewhat dated, with spartan exhibits arranged often in rows behind glass. The flora in particular were dusty and faded, and the stuffed birds just seemed sad.

A special exhibit that started in September and runs through June promised something special, “Orsi & Uomi” — Bears and Men.

“Journey to discover the profound relationship that links man to bear from prehistory to our days,” said the promotional poster after I Google-translated it. “A look back at the life and habits of this legendary, feared and revered animal, which already populated our territory 70,000 years ago.”

They were referring to cave bears, which inhabited low mountainous areas like the Berici hills of Vicenza. They lived in Europe at the same time as Neanderthals and like them overlapped with homo sapiens. To catch you up:

“Along with mammoths, lions and woolly rhinos, cave bears (Ursus spelaeus) were once among Europe’s most impressive creatures. Males weighed up to 1,500 pounds, 50 percent more than the largest modern grizzlies,” according to Smithsonian Magazine. “Prehistoric humans painted images of the animals on cave walls and carved their likeness in fragments of mammoth tusk. But the relationship between humans and cave bears has been mysterious. Were humans prey for the bears, or predators? Were bears objects of worship or fear?”

I don’t know if the exhibit took a swing at those questions. But the cave bear skeleton was impressive, and there were nice photos and a video of modern bears frolicking on the Finnish taiga.

It’s not clear what killed off the cave bears, although climate change, starvation and competition for caves are thought to have contributed. It’s also unknown why the burly, possibly cannibalistic Neanderthals went extinct, although it happened a few thousand years after anatomically modern humans showed up on the scene. Just saying.

But the bears and the Neanderthals live on in a way: 0.9 to 2.4 percent of the DNA of brown bears today traces back to the cave bear, according to a study published in August in “Nature Ecology and Evolution.”

The finding marked just the second time that researchers have found an extinct ice age creature’s genes within in a living relative, according to National Geographic.

The first was in humans. Between 1.5 and 4 percent of the non-African human genome comes from Neanderthals.