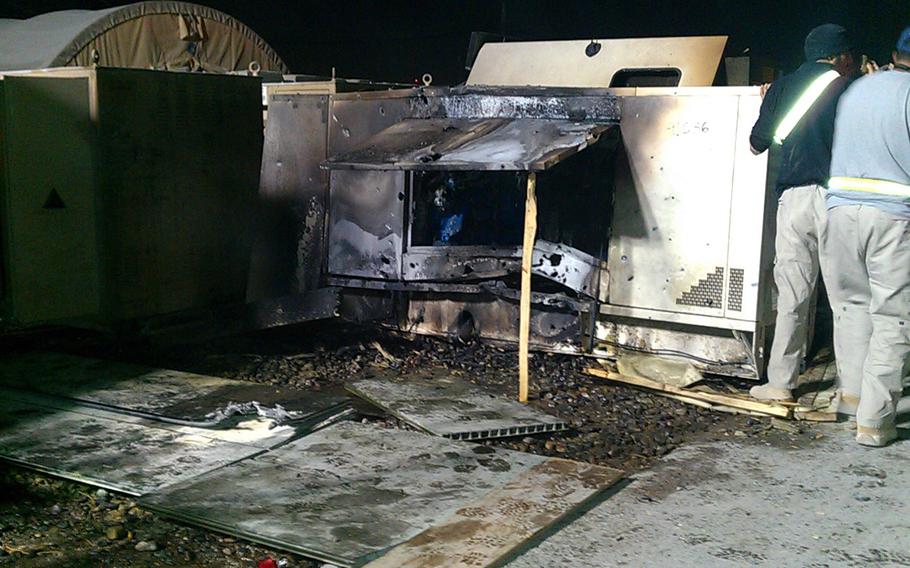 Workers in reflective safety belts examine a generator at Kandahar Airfield destroyed by a Taliban rocket on Oct. 18, 2011. The rocket hit a metal walkway in front of the generator, flinging shrapnel and starting a fire. (Courtesy of U.S. Air Force)

Workers in reflective safety belts examine a generator at Kandahar Airfield destroyed by a Taliban rocket on Oct. 18, 2011. The rocket hit a metal walkway in front of the generator, flinging shrapnel and starting a fire. (Courtesy of U.S. Air Force) 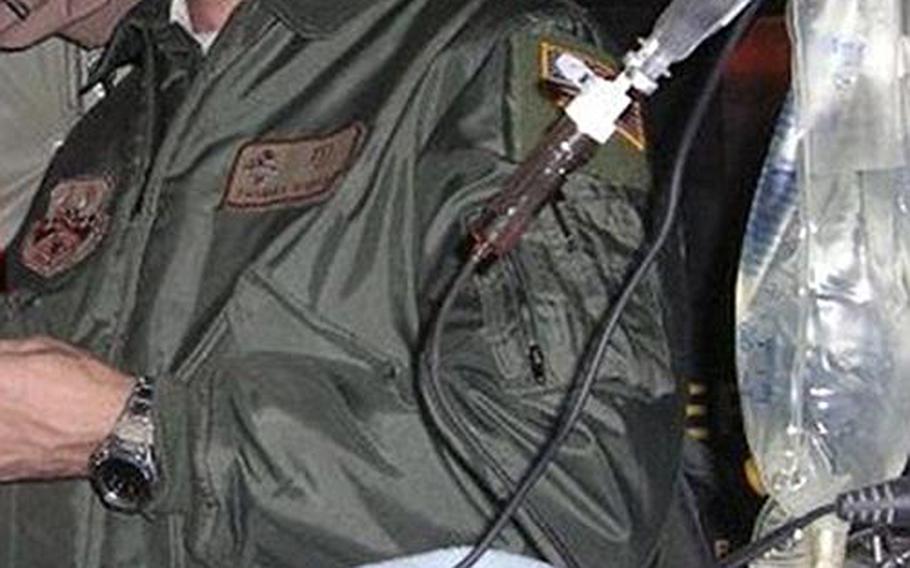 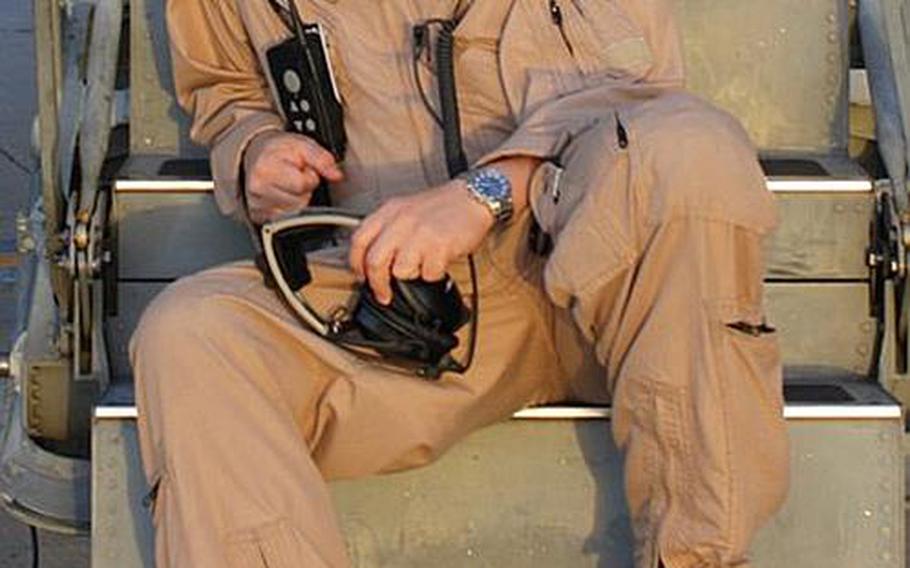 Air Force Capt. Donald Tritz, a flight nurse, poses on the steps of a C-17 cargo plane, which military medical personnel can transform into a flying intensive care unit for the most seriously injured troops. (Courtesy of U.S. Air Force)

It was around 10 p.m. and Air Force Capt. Donald Tritz, a flight nurse, was just finishing a series of equipment function tests when the familiar warning came.

Another night, another rocket attack at Kandahar Air Field, the major forward operating base for NATO coalition troops in southern Afghanistan.

Meanwhile, in the same medical squadron tent, Air Force Capt. Thomas Borsari, a critical care physician (since promoted to major) had been doing routine administrative tasks on the computer.

“We proceeded to hit the dirt, as instructed,” Borsari said.

The rockets had been falling on KAF for years, usually thudding down and causing little damage while base personnel scurried into concrete shelters. The insurgents’ aim on that night — Oct. 18, 2011 — was luckier than usual.

An enormous, ground-shaking explosion buffeted the tent and cut out the lights. Then other rockets began falling, further away but still too close for comfort.

They didn’t stay there long.

Within minutes, it became clear something was very wrong in the complex of medical tents that included their squadron tent, a tent where wounded troops are housed and a third used as a nurses’ work area and for equipment storage.

“What’s on fire?” Borsari asked in the darkened tent, while medical equipment on battery backups beeped warnings. “Just dust,” someone else answered.

Borsari and Tritz, doctor and nurse, would step far beyond their normal roles that night, saving hundreds of thousands of dollars of medical equipment they need to do their jobs, and potentially saving lives. For their heroism, they were awarded Air Force Commendation Medals with Valor.

‘Envy of the world’

Thanks to steady advances in battlefield trauma medicine, injuries that would have killed in previous wars are now survivable, and 98 percent of wounded warriors who reach medical facilities will live, officials say. That makes the recent conflicts “the most survivable war in the history of combat,” Adm. William Gortney, then-director of the Pentagon’s Joint Staff, said at a military health conference last year in Washington.

Part of the equation is the medevac teams that whisk wounded troops off the battlefield more quickly than ever.

Another part of it is the evolving standard of in-flight care that has turned the bellies of military cargo aircraft into mobile trauma units. That’s where Borsari, 33, and Tritz, 43, have a role.

Borsari, an anesthesiologist by training, is the physician member of a Critical Care Airborne Transport Team, or CCATT, a specialized in-flight team that cares for the most damaged patients, including those who have lost multiple limbs, been burned over a large percentage of their bodies or suffered grave internal injuries.

“The aeromedical evacuation teams are very good at caring for the walking wounded, but the CCATT team takes care of the really critically sick or wounded patients,” Borsari said.

Tritz, who typically cares for less critically injured patients than CCATT members, joined the military as a Navy Corpsman in 1987 before becoming an Air Force officer. He served in the Desert Storm invasion, as well as two tours in the recent Iraq War. Miniaturization of medical equipment and new standards of care have completely revolutionized battlefield medicine, Tritz said.

“In 1987 when I joined, we didn’t have this capability to see how fast we could get these folks back to have definitive care,” he said. “We had a vast, huge footprint for medical in the AOR, because we had to take care of them in theater until they were stable enough to transfer.”

No soldiers in history have received the care that U.S. troops receive today, Tritz said.

“I think we’re the envy of the world for what we do for our military.”

‘It blew up the generator’

On the night of the rocket attack at KAF, Borsari and Tritz ran from the squadron tent and discovered what had created the blast and the electrical outage. A rocket had struck near a large generator just a few feet from one of the medical tents.

“It blew up the generator, and right next to the generator was a 1,500-gallon diesel fuel tank,” Tritz said. “If they had shot just a foot to the left they would have taken us all out.”

The Taliban rocket had done plenty of damage, however, spraying the nearby nurses’ tent with shrapnel, injuring one man and destroying body armor, helmets and other equipment.

“[Tritz] and I grabbed fire extinguishers and started emptying them,” Borsari said. “We knew if the tents went up, we weren’t going to be able to function.”

Among the equipment in the tents were the kits that make CCATT units virtual mobile intensive care units, including ventilators to support breathing, vital-sign monitoring equipment, medicine infusion pumps, supplies of drugs and backup equipment.

Another nurse, Capt. Anastasia Pyzhov, ran to collect every fire extinguisher she could find and hurried them to Borsari and Tritz, who stood at the base of towering flames trying to keep the blaze from spreading.

“The flames were probably 20 to 30 feet high; it was a raging fire,” Tritz said. “We used up every extinguisher we got our hands on.”

After about five minutes fighting the blaze, KAF firefighters arrived to take over. Borsari then checked out the wounded airman, who had been hit with shrapnel in the head and thigh, and escorted him to the emergency room at the hospital on base.

The following day, thanks to their quick work with the fire extinguishers, Borsari and Tritz were back at work trying to ensure America’s wounded warriors make it home to their families.

“We still had our equipment, we were still operational, and no one died,” Borsari said. “It ended up a lot better than it could have.”