Buy Photo
Stuiben Falls is one of the highlights during a visit to Austria's Oetzal. A long suspension bridge leads the way to the waterfall, which is the largest in the Tirol region. (John Vandiver/Stars and Stripes)

Buy Photo
Stuiben Falls is one of the highlights during a visit to Austria's Oetzal. A long suspension bridge leads the way to the waterfall, which is the largest in the Tirol region. (John Vandiver/Stars and Stripes) 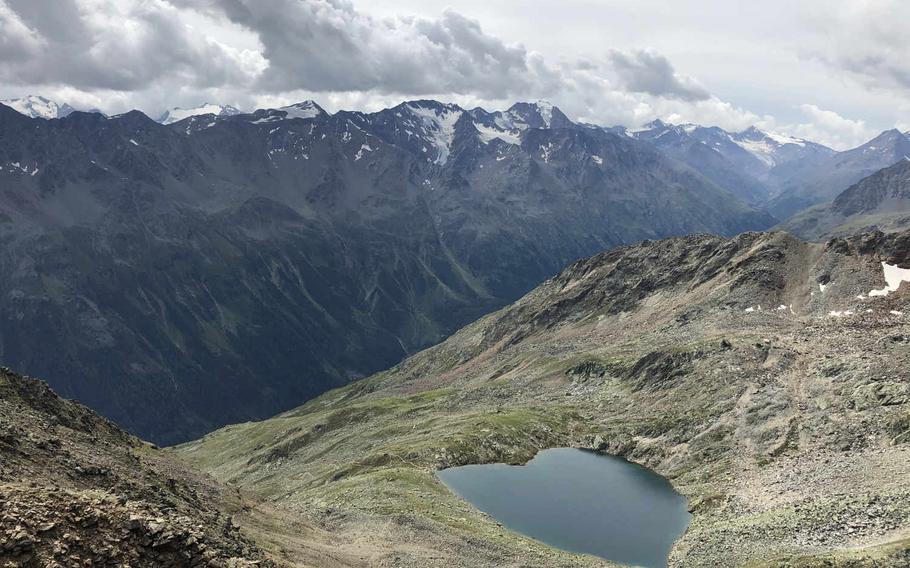 Buy Photo
In the Oetzal in Austria's Tirol region, there are more than 200 mountains in the 10,000-foot range. One of them, the Gaislachkogel, offers a great view from the top. (John Vandiver/Stars and Stripes) The Oetztal in the heart of the Austrian Alps is a winter sports mecca, but there’s something to be said for getting there before the ski bums.

It was late summer when we arrived in Oetz, a small village in the middle of the valley that’s surrounded by stunning mountain peaks — there are 250 10,000-footers in the area.

During our visit, the leaves were lush, but it made me wish for a fall visit when the foliage turns. If you enjoy high mountains with a river valley, sweeping views and a varied itinerary, Oetz is a great base from which to explore the valley on a long weekend. About an hour’s drive south of Garmisch-Partenkirchen, it’s also a good alternative for U.S. military personnel in the region looking to mix up their mountain adventures.

Oetz sits on the Ache river, where there’s rafting and canoeing in the summer. The town has lots of cafes, hotels and restaurants near the foot of the 9,900-foot Acherkogel mountain, which offers excellent hiking trails that are easy enough for school-aged kids.

A must-see — free of charge — is Stuiben Falls in nearby Umhausen. The largest waterfall in Tirol, it’s 520 feet of falling water, with steep caged walking steps alongside it and a suspension bridge that provides a dramatic view. At one up-close observation point, the force of the water is so great, the spray comes in gusts that will soak you. It’s refreshing on a hot summer day, but best to avoid at this chilly time of year.

Arguably the best view in the valley is a 30-minute drive south of Oetz in Solden, where you can spend a day hiking to the top of the 10,000-foot Gaislachkogel mountain. We took the cable car up instead for the sweeping mountaintop view, which featured in the 2015 James Bond film “Spectre.” There’s a museum there dedicated to 007, and an upscale restaurant with a panoramic view where we splurged on some apple strudel while taking in the scenery.

After that, we took a cable car halfway down the mountain, then hiked the rest of the way via the network of twisting, turning trails. Spending a couple of hours on a mountain trail can be a grind, especially with a couple of elementary school-aged kids, but the scenery was enough to keep everyone happily trudging along.

DIRECTIONS: The Austrian town of Oetz is about 50 miles southwest of Garmisch-Partenkirchen and 30 miles west of Innsbruck and is accessible by highway.

COSTS: Accommodations range from upscale to budget hotels. Many of the outdoor activities and trails are free.

INFORMATION: The website oetz.com is a one-stop shop for tourist information, including things to do, good trail routes and hotel options.