Cory Hill, second from right, and Christopher Araujo, far right, in a training scenario in Austin, Texas, on Sept. 23. (Alex Horton/Stars and Stripes)

Cory Hill, second from right, and Christopher Araujo, far right, in a training scenario in Austin, Texas, on Sept. 23. (Alex Horton/Stars and Stripes) An officer with the Dallas Police Department during training in Austin, Texas, on Sept. 23, 2016. (Alex Horton/Stars and Stripes) 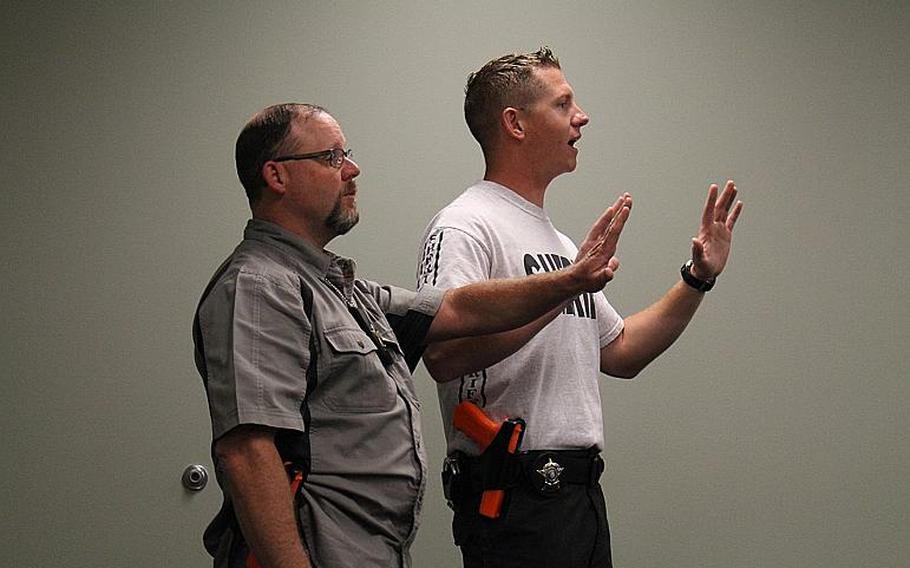 AUSTIN, Texas — Two police officers watched Christopher Araujo pace back and forth, a gun in his waistband. Araujo was in Texas, but his mind was in Iraq.

“I’m here to help, bro,” one of the officers said.

“You need to stay outside the wire,” Araujo snapped back, his perimeter secured.

The pistols stayed in the holsters.

“I can get you in touch with some care,” one of the officers calmly said. “Why don’t you come on out?”

Araujo snapped out of his daze: “Yeah, I can do that.”

The Roy Butler Training Academy last week transformed conference rooms into tense exercises. Scenes like the one involving Araujo were the culmination of a three-day course for 25 police officers from across Texas to learn how to diffuse responses involving “trauma-affected veterans” — ones who might be dealing with post-traumatic stress disorder or traumatic brain injury.

Texas Veterans Commission, a state-run program connecting veterans with resources and benefits, is among several federal, state and local partners across Texas that designed the training after advocates here expressed a need for localized hands-on programs. A state bill later mandated the program.

Texas is home to 1.6 million veterans, second only to California, and veterans and their families add up to 18 percent of the state population. High employment and low cost of living fuel growth in Texas, and troops rotating out of Fort Hood and Joint Base San Antonio will only add to the number of veterans in the state.

As troops leave the military as part of recent drawdowns, encounters between veterans and police rise, said Erin McGann, who works with veterans in the criminal justice system at TVC. Though police do not specifically track veteran-related calls, an uptick in anecdotal stories from inside the veterans community pointed to a growing issue, she said.

Problems in many of these encounters could have been reduced “if the officers were trained appropriately on how to handle veterans,” she said.

“We have an obligation as a society to meet veterans where they are and get them services. The community needs to be a base of support. And law enforcement is a big part of that,” said Sean Hanna, a Navy veteran and director of the mental health program at TVC.

The services that Hanna describes are mostly tailored to veterans. Police can be confounded by encounters with mentally distressed civilians who might need care. Often the only choice is imprisonment, which can put more pressure on an overtaxed criminal justice system. For veterans, there are financial, housing and mental health resources that police in the training learn about to help those they encounter on the job, Hanna said.

The Texas training loops in the operating philosophy of crisis intervention teams — officers trained to diffuse situations involving people with psychological issues. McGann and other program leaders stressed to officers that PTSD issues are not unique to veterans, and only part of the veteran population is affected.

Documents for the commission’s class caution trainees to assess how outside influences color their perceptions of veterans, which could lead to unconscious bias — and an overly aggressive posture.

“Pop culture does veterans few favors in how they are shown,” according to the documents. “Be careful about making assumptions.”

Araujo, an Army veteran with five combat tours who works in veterans peer support, volunteered to play a traumatized veteran who was confrontational with responding officers. While two of the real officers in the scenario are former troops, Araujo believes the training will be a pathway for police to help understand veterans.

“For police with no military background, I think the training gives them the veteran perspective. There’s nothing more valuable than that,” he said after the scenario.

Classroom instructors offered practical tips, such as looking for military-themed decals on a car during a traffic stop and understanding the sea of acronyms and vernacular a veteran might use during a police encounter.

The training comes amid building tensions across the country on the use of force by police.

Protests rocked Charlotte, N.C., last week after police shot and killed Keith L. Scott during a traffic stop. In Tulsa, Okla., an officer was charged with manslaughter after she fatally shot Terence Crutcher on Sept. 16, while he was unarmed.

Those shootings and protests, among others, have sparked debate about how and when officers choose to use deadly force. The training looks at that question through the framework of veterans.

Cory Hill, a deputy sheriff in Travis County, Texas, has a foot in both worlds. He’s an officer but also served in Iraq with the Army, running convoy escorts.

He said he came home without PTSD, but the training made him realize that some veterans did not return home as unaffected as he did.

“The training helps me slow down and think about what’s happening,” Hill said. “All first responders should go through this. It gives us another tool and other options to get that person help and get us home safely.”

“We’re not changing their rules,” Hanna said. “We’re asking them to keep an awareness and openness to identifying veterans and to use rapport to de-escalate the situation.”

If there is no opportunity to do that, “a cop has got to be a cop,” he said.

There is another benefit to learning about issues stemming from war, organizers said. A commonality between police and troops can help police see themselves in the veteran experience.

“You are not so different from that veteran you are de-escalating. You both don’t know who the enemy is. You’re accustomed with violence and traumatic events,” said B.J. Wagner, a former police officer who works with veterans in the criminal justice system for the Meadows Mental Health Policy Institute for Texas, a nonpartisan research and policy group.

“If you’re aware of your own issues and consider your own trauma, suddenly you can approach that veteran with a different mindset,” she said.