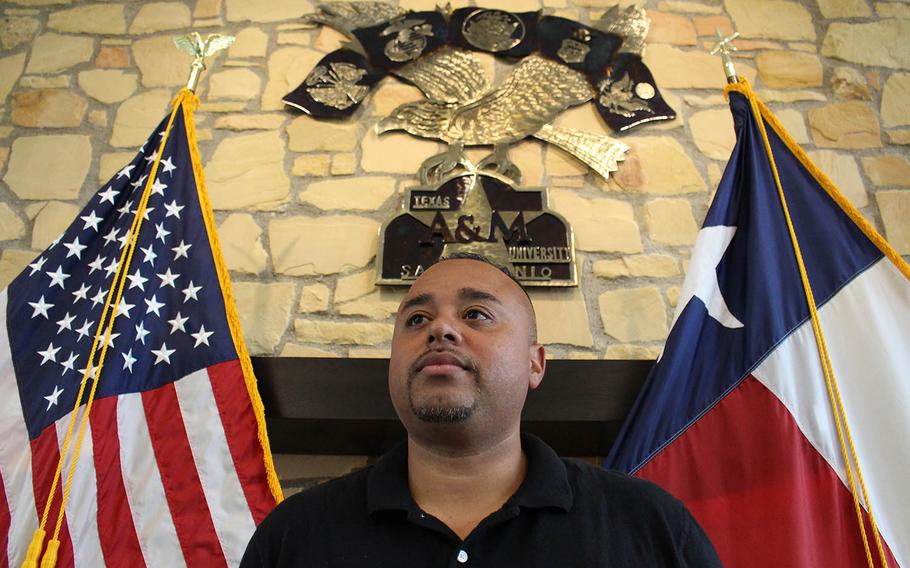 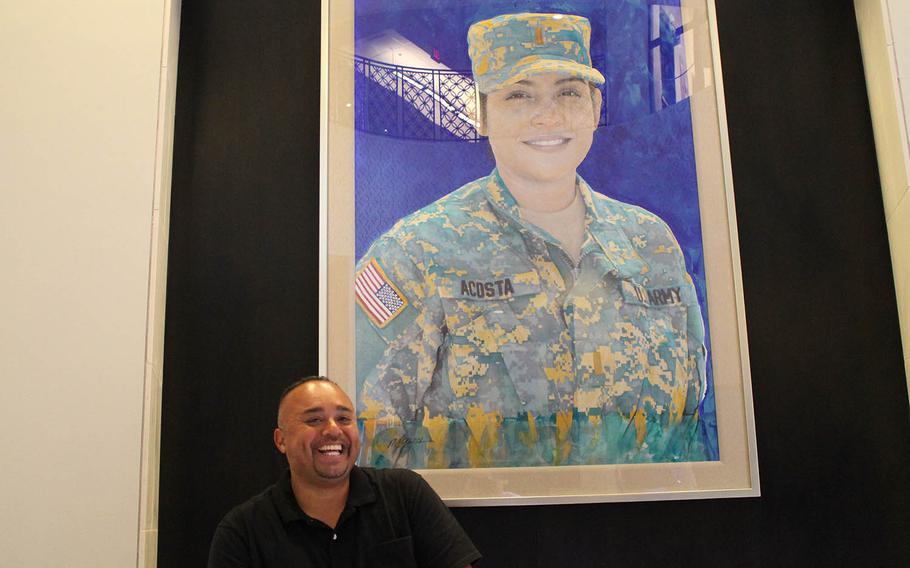 SAN ANTONIO — Navy corpsman Jose Ramirez received a simple order: Set up a field hospital for wounded Marines and insurgents before the second battle of Fallujah, Iraq, in November 2004.

He prepped patient areas in a commandeered building and staged medical supplies for the inevitable flow of injured Marines. That night he saw his first amputated leg, but his training gave him a good measure of confidence in his abilities. The man the Marines called “Doc” was ready. He knew exactly what to do.

Math class, however, was another story.

“I was nervous. I was uncertain where it was going to take me. I couldn’t see it all coming together,” Ramirez said of his first semester at San Antonio College in 2013, nine years after he left one of the world’s most storied battlefields of the past half-century. A degree seemed far off and murky, and Ramirez needed to relearn how to study and make his own schedule.

He needed to learn how to make his success a priority. How do you do that after pledging to put everyone’s well-being before yours?

Bringing veterans like Ramirez into the academic fold is at the heart of Texas A&M University-San Antonio’s new initiative of military culture competence training, a program that began last month at its campus on the southern edge of San Antonio, which proclaims itself Military City for its collection of bases and large population of military retirees.

About 15 percent of the nearly 5,500 students at TAMUSA are veterans or current servicemembers, according to university officials. The appeal of using post-9/11 GI Bill benefits has sent 1.6 million veterans and dependents nationwide to school since 2009, according to VA spokesman Randy Noller.

While other universities have adopted similar awareness programs for staffers -- Georgetown University, the University of Georgia and California State-Long Beach, for example -- the program at TAMUSA is likely unprecedented in its scope and mandate.

All 155 members of the faculty were required to take about five hours of online and workshop training, said Dr. K.C. Kalmbach, an associate psychology professor who designed the training with the campus military affairs office.

The training includes basic military history knowledge, the strengths that veterans possess and the roadblocks they face, along with engagement strategies aimed at retention and graduation.

A training handout provided to Stars and Stripes describes the gallows humor that many troops use when describing challenging and traumatic situations. “It is quite common for such professionals to develop a dark sense of humor or make seemingly cynical and unfeeling comments,” the document says.

Kalmbach’s clinical work on student veterans with post-traumatic stress pointed to a key challenge: The education of military-connected students holds many hazards.

“Veterans are at risk of dropping out more than the average student,” she said Tuesday, describing a cocktail of factors. Feeling old and out of place sitting next to students far younger with priorities and goals foreign to them. Grappling with study skills years or even decades after high school. Perceptions of a disconnect between their culture and academia.

“We know a sense of belonging for students is a predictor of graduation,” she said.

Once Kalmbach realized the center of gravity for many veterans was a feeling of belonging, it made sense to educate the faculty and staff about their challenges and promise, she said. It helped that many of issues affecting veterans, like juggling jobs and family, were common to the nontraditional students that TAMUSA attracts, she said.

A main priority of the training is understanding the concept itself. It’s not sensitivity training. It’s about education and awareness of an individual culture whose values and ideals can be defined and understood, she said.

Awareness training is standard at many colleges for groups like minorities and gay and transgender students. Establishing the idea of the military as a cultural force is not only key to understanding student veterans, but in step with efforts of inclusion at virtually every university in the country, she said.

In a training handout, one item reads: “The preservation of respectful expression of differing opinions and values is the lifeblood of higher education.” Those cultural values point to the strengths that military-connected students bring to the classroom and professors want to embrace, Kalmbach said.

Student veterans are better at meeting deadlines, understanding accountability and knowing they need to work hard to produce an outcome, she said, unlike students with no military experience. “They’re much more worldwise. They’ve experienced other cultures and languages. And they’ve had to grow up pretty quickly,” she said.

Three of her students were mobilized for tours in Afghanistan and completed assignments online even as they faced power outages and combat missions. They turned in every assignment without fail.

“I can’t say the same about my students here,” she said.

Richard Delgado, a Marine Corps veteran and director of the military affairs office, said Tuesday that a greater awareness of military-connected culture and life has paid off in practical ways.

For example, professors now understand a VA appointment for a prosthetics fitting confirmed months ago cannot be rescheduled as easy as a routine checkup, he said.

Other issues, like mobilization orders to excuse coursework for students, can now be sent straight to professors instead of shuffled into the administration bureaucracy, which delayed action in the past, he said.

Delgado pointed to one glaring thing many veterans on campus took issue with: course syllabi. Troops are used to inflexible orders and have been caught off guard with unexpected revisions. Many plan work and family events around the schedule, he said. On the flipside, mobilizations and injuries can conflict with course assignments.

As part of the training, professors are encouraged to add notices on syllabi directing military-connected students to discuss any issues directly, which solves issues before they arise, he said.

Delgado described TAMUSA as “military embracing,” which was built into the foundation of the Patriots Casa, the main hub for military and veteran students, where Delgado houses the military affairs office.

The ground floor features a rotating gallery of artifacts from student veterans, like a letter from a Vietnam veteran who wrote it as his last correspondence home, and a voice recording of a student telling a harrowing combat story.

A piece of mangled steel from the World Trade Center lies in the center. The rounded arch of the entryway is inspired by that other refuge of military significance in San Antonio: The Alamo.

The military culture infusion with the campus, Delgado said, was blessed by the president, Dr. Cynthia Teniente-Matson. Even freshmen with no military connection have gained understanding. Every Friday, a huge swath of the student body wears red to signal remembrance of deployed troops.

Kalmbach said the training has drawn interest from other universities who want to emulate the model, along with private industry leaders hungry to hire veterans for the strengths the training identifies.

It was created for TAMUSA, Delgado said, and not initially designed for export. But the main campus at College Station, Texas, is interested in adopting it. The potential for expansion could be endless, he said.

The program is being modified for all staff, not just faculty, Kalmbach said. One promising development is training for veterans, which mirrors the education the faculty has received.

“The military is a core part of their identity, just like race or religion or their hometown,” she said of military-connected students. “It’s important to them. But it’s not the only thing about them. So we want to illuminate academic culture for military students and foster a meeting of the minds,” she said.

One focus is separating the collectivist culture of the military and the individualistic focus of academics, where students are expected to function mostly on their own without an overarching, all-in mission, she said.

It’s the kind of thinking that Ramirez could have used a long time ago, but has since picked up the hard way as he nears completion of his dual degree in psychology and sociology at TAMUSA.

One thing his professors have taught him is to look past graduation and have a plan. He’s focused on a master’s degree in rehabilitation counseling so he can work with veterans at the Department of Veterans Affairs or a nonprofit.

For now, he works alongside Delgado in the military office to make sure other veterans learn the same lessons of planning for the future.

“We’re not pulling the veteran card,” he said about the evolving training program. “But it feels good to be welcomed and to have a home. It feels like where I’m supposed to be.”