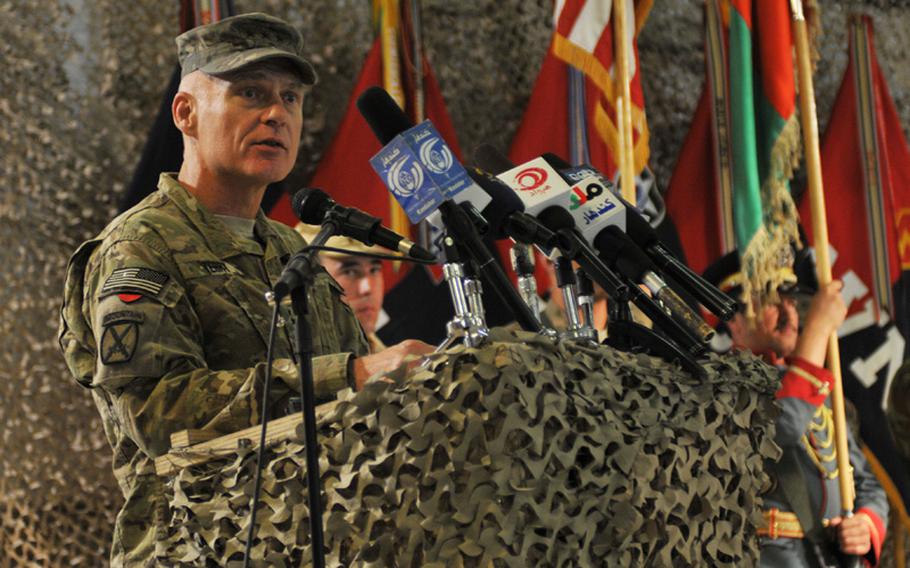 WASHINGTON – The Afghan force that is developing won’t look like one fielded by a NATO country, so don’t judge it by the standards of the most advanced militaries in the world, the U.S. deputy commander in Afghanistan told reporters Wednesday in Washington.

Their weapons will be more modest and the capabilities more basic, but Afghan security forces can successfully take over the fight against the Taliban as U.S. and coalition forces recede into a support role, said Army Lt. Gen. James Terry, commander of International Security Assistance Force Joint Command.

“Insurgencies are defeated over time by legitimate and well-trained indigenous forces,” Terry said at the Pentagon. “We should not view these solutions through western eyes and assess them too critically.”

Seemingly necessary capabilities that the Afghans lack – the ability to deploy close air support during firefights, for instance – can be made up for with simpler solutions, he said.

An example: The ANSF is receiving weapons and training to allow them to direct concentrated mortar fire on attackers, he said, rather than relying on the air support frequently supplied when U.S. troops come under fire.

“Now instead of calling back up into the air, [the Afghans] have those organic capabilities back inside their formations,” he said.

ISAF troops have moved away from the model of conducting joint patrols with small Afghan units and are focused on training and equipping at the larger kandak, or battalion level, Terry said. The next step is for ISAF efforts to refocus their training and assistance efforts at the brigade and corps levels, he said.

More than 400 special ISAF training and assistance units are working with Afghan forces, he said. Increasingly, the units are focused not on basic military training but on teaching the Afghans themselves to be “enablers” – including air evacuation, logistics and fire support.

Terry said he could not speculate on the pace of the U.S. troop drawdown, which President Barack Obama said during a recent Washington visit by Afghan President Hamid Karzai would be announced in coming months.