Teams have had a Devil of a time scoring against Kinnick 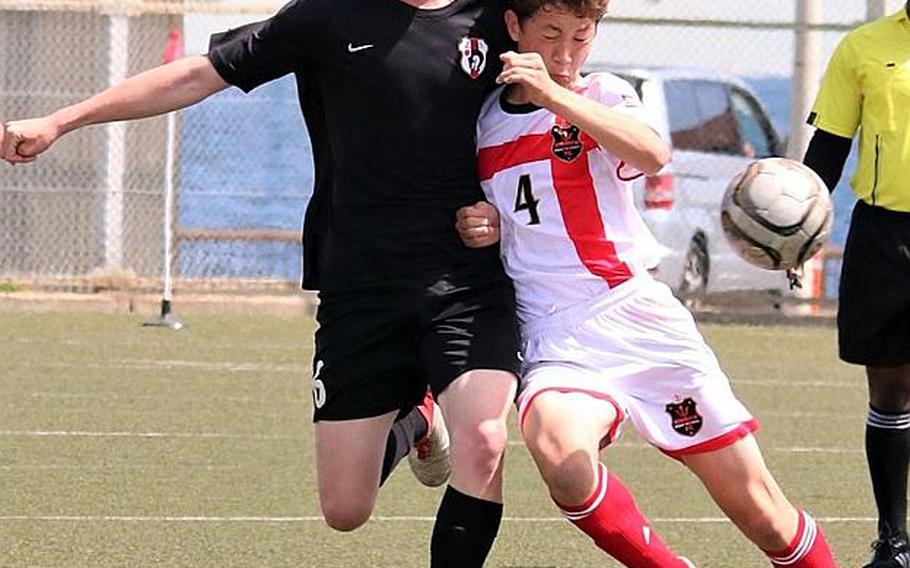 Cael Bowen, right, and a staunch defense has helped Nile C. Kinnick to a DODEA-Japan tournament title and a 19-1-1 record this season. (Vanessa Badiola/Special to Stripes)

Cael Bowen, right, and a staunch defense has helped Nile C. Kinnick to a DODEA-Japan tournament title and a 19-1-1 record this season. (Vanessa Badiola/Special to Stripes) 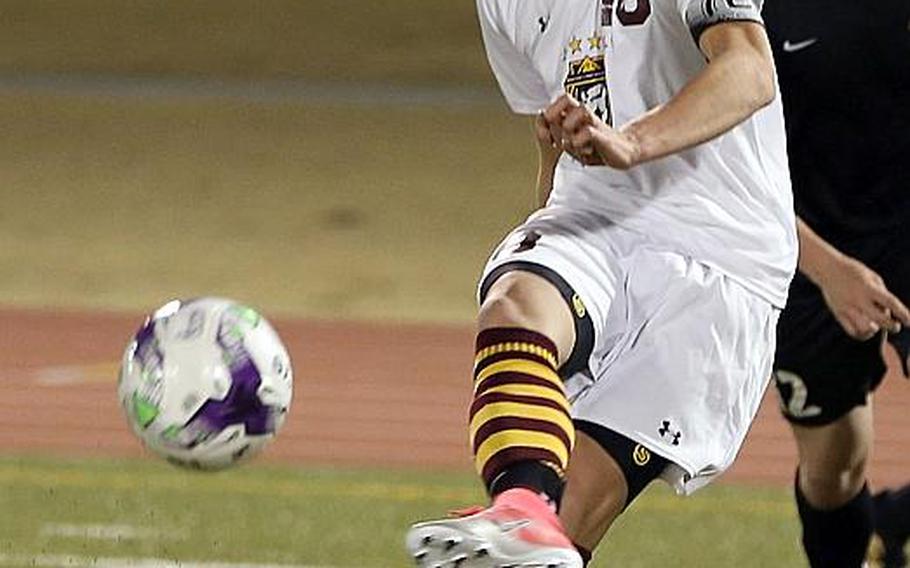 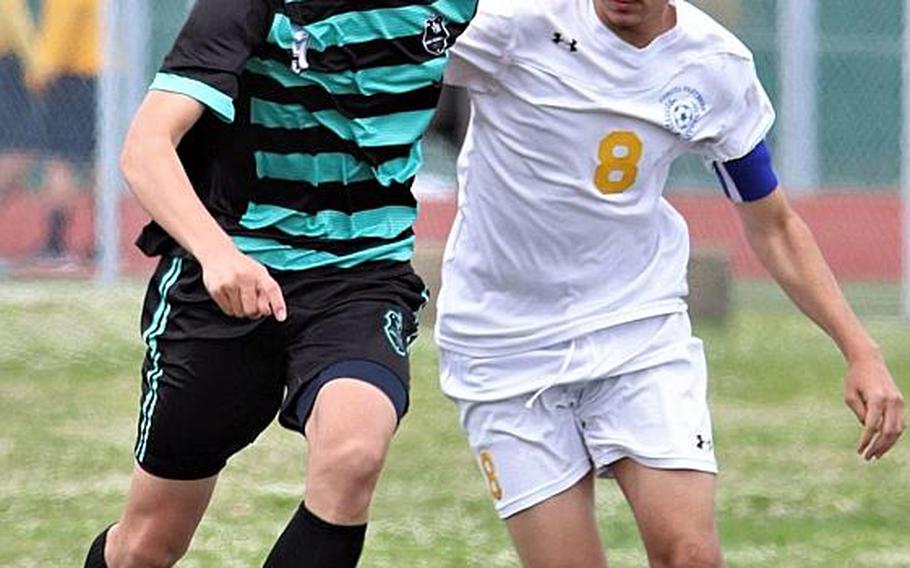 Kai Sullivan paces Nile C. Kinnick with 34 goals, but it's been defense that's led the Red Devils to a 19-1-1 record this season heading into the Far East Division I Tournament. (Vanessa Badiola/Special to Stripes) 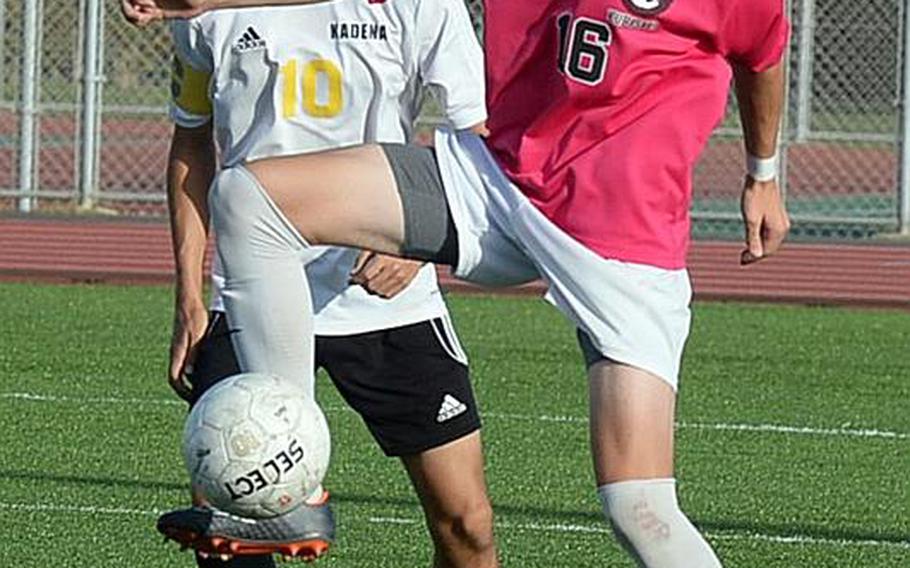 Judge Morgan, right, with 18 goals and five assists, and Kian Smith, with eight goals and six assists, bring scoring and playmaking to the front lines for Kubasaki and Kadena this season. (Dave Ornauer/Stars and Stripes)

Travis Stevens might have been pleased enough about his team capturing the title in last month’s DODEA-Japan boys soccer tournament. But the way his Nile C. Kinnick team won the event was what really pleased him.

In five matches, his Red Devils scored 20 goals, including six in the championship match against Matthew C. Perry. But over that span, Kinnick allowed just one goal, something Stevens says is an indicator of the balance his team possesses.

“Our offense is powerful,” Stevens said of a unit led by Kai Sullivan (34 goals), Tatsuya Cosey (28) and Akimanzi Siibo (13 goals, 13 assists). “But they realize they can go heavy up front because they know that the defense is rock steady.”

It’s the sort of combined effort that Stevens says he hopes will lead to the first Far East Division I Tournament title in school history.

They begin play Monday at Kubasaki’s Mike Petty Stadium in a tournament that features just four D-I teams, including defending champion Kadena, 2016 champion Kubasaki and 2015 champion Seoul American. The Panthers feature their own solid defender in Quentin Moore and the Dragons have a solid scoring threat in Judge Morgan (18 goals).

Rain is forecast the second two days of the three-day tournament, which could lead play to be moved to Ryukyu Middle School’s Habu Field on Kadena Air Base for the third straight year.

Meanwhile, at Misawa Air Base in northeastern Japan, the Division II Tournament begins Monday with Christian Academy Japan putting its title on the line in a nine-team double-elimination tournament. The forecast there looks OK, if not a bit chilly over the three days.

Wet or dry conditions, the Red Devils plan to rely on a defense led by Kei Downs, who played midfield last season; Nathan Scheidt, who transferred from Seoul American; and goalkeeper Nicholas Burk.

Having those players permits the ones in front to “take risks,” Stevens said. “It builds confidence in the rest of the team, knowing they have a good line in back.”

Scheidt, in particular, can be a threat not only in back but taking free kicks and corner kicks, any of which can be a scoring opportunity, Stevens said. “The kid can stick it a mile, even in the wind, he can bomb them 65 yards. He was a huge pickup for us this year,” he said.

Still, Kinnick isn’t expecting anything other than a tough battle, Stevens said. “Kadena and Kubasaki, they’re powerhouse teams,” he said. “Going there is always a mystery, that first day, to see how good they are. And they’re always good.”

To beat Kadena means getting the ball past Moore, his defensive sidekick Nao Heckerman and goalkeeper Jonathan Ferguson. “Without them, we don’t win,” Panthers coach Chris Anderson said. “They’re the keystone. They hold everything together.”

Morgan transferred in to Kubasaki from Virginia and “adds a certain level of experience and athleticism” to a Kubasaki attack that was already strong with Ryo Elliot and Ilijah Washington.

In the D-II Tournament, CAJ on paper might seem to have a glaring hole in its offense now that Lawrence Yamaguchi has graduated. But enough firepower remains, including brothers Angus (13 goals) and Jacky Holmes (nine goals) and steady, balanced play throughout the pitch.

“They can win either D-I or D-II; they’re a good soccer team,” Stevens said.

And despite having that strong scoring weapon in Lange, that guarantees nothing for the Samurai, according to Lange’s father and coach Mark Lange.

“Defense wins championships, no question,” Mark Lange said. “It’s nice to have goal scoring, but 1-0 will still get you a championship. But we’re not going to tell Kai to stop scoring.”