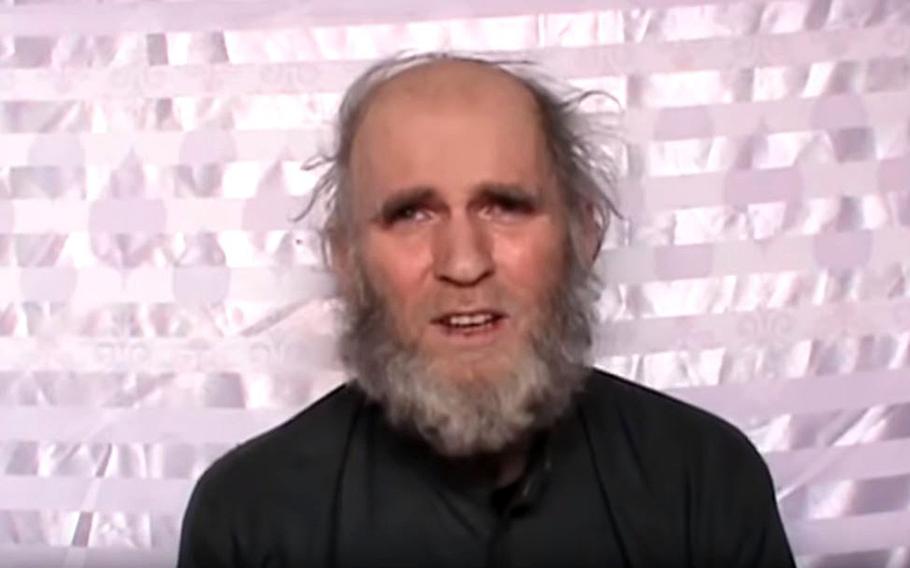 The Taliban say the health of American hostage Kevin King is ''deteriorating rapidly'' and that they will not be responsible for his death if the U.S. does not meet their demand to release imprisoned militants. YouTube screenshot (YouTube screenshot)

KABUL, Afghanistan — The Taliban say the health of an American they are holding hostage is “deteriorating rapidly” and that they will not be responsible for his death if the U.S. does not meet their demand to release imprisoned militants.

Kevin King and his Australian colleague, Timothy Weeks, both of whom taught at the American University in Kabul, were kidnapped at gunpoint in August 2016 as their vehicle left the campus.

King has heart and kidney complications and his condition has “exponentially worsened,” the Taliban said in a statement Monday.

“We have periodically tried to treat and care for him but since we are facing war conditions and do not readily have access to health facilities we are unable to deliver complete treatment,” the Taliban said, adding that King had been losing consciousness frequently.

If King dies, the Taliban said they “will not be held responsible due to the fact that the opposition does not want to bring an end to the issue.”

The American University in Kabul called for King and Weeks’ release in a statement on its website Monday. It said that the school’s leaders, faculty and students “are deeply saddened and disturbed to receive the news” of King’s deteriorating health.

King and Weeks, the statement said, “came to Afghanistan to teach Afghan youth and contribute to building a peaceful Afghanistan. They have done no harm to anyone.”

Earlier this year, the Taliban released a video of King and Weeks in which they pleaded for the release of Taliban prisoners in exchange for their release.

The Taliban-affiliated Haqqani Network is suspected of holding the pair.

Days after their capture last year, Navy SEALs led a raid in eastern Afghanistan to rescue the hostages, but they were not found.