Tales of service and sacrifice 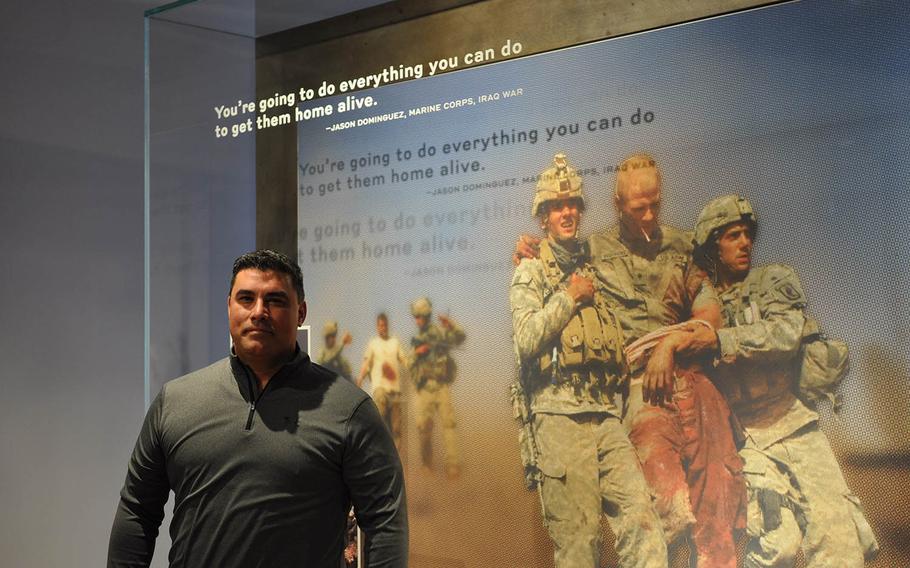 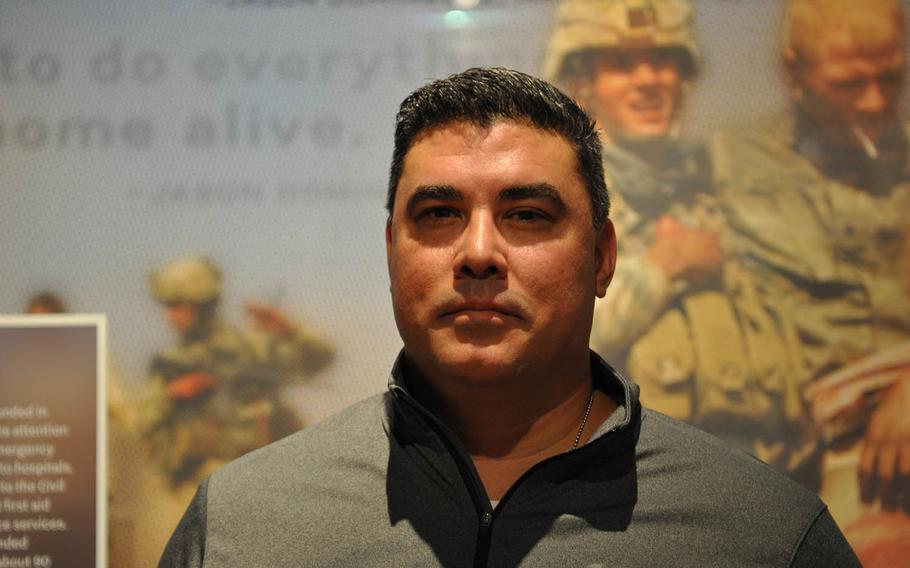 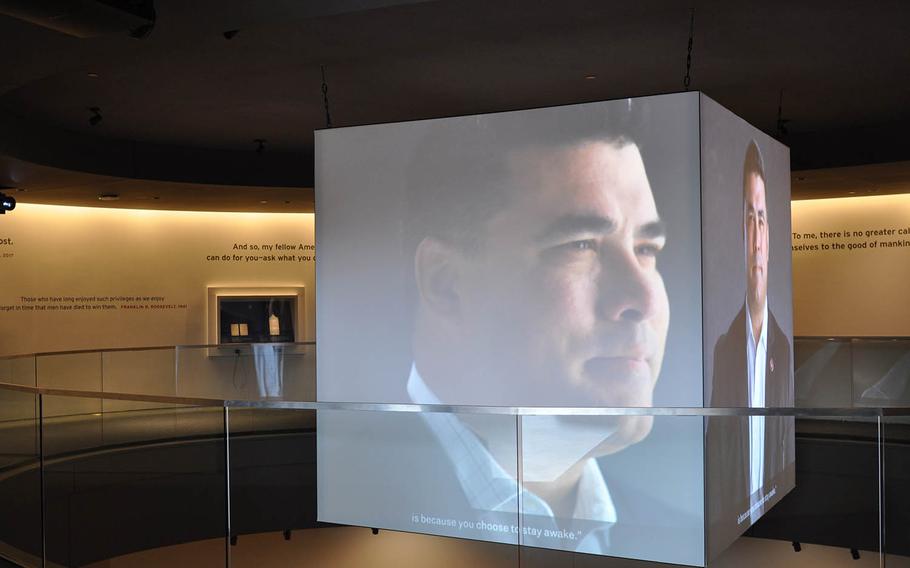 An interview with Jason Dominguez, a former Marine Corps sergeant, plays on large screens in the center of the National Veterans Memorial and Museum on Oct. 26. The facility opened Oct. 27 in Columbus, Ohio. (NIKKI WENTLING/STARS AND STRIPES) 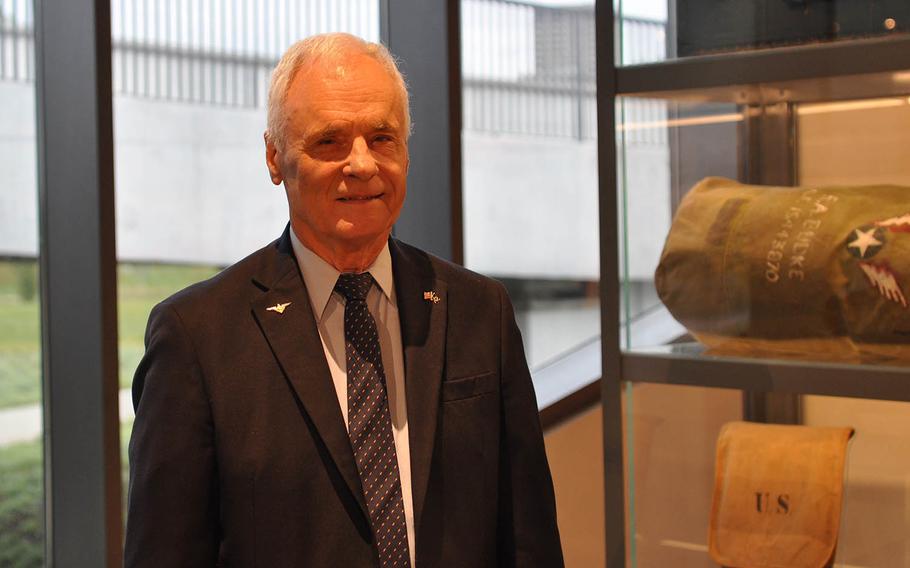 Thomas Moe, a retired Air Force colonel, helped with plans for the new National Veterans Memorial and Museum and is featured in one exhibit. Moe, a former fighter pilot, was kept as a prisoner of war in Vietnam for five years. When he was released, he continued flying with the Air Force for 12 years. (NIKKI WENTLING/STARS AND STRIPES) 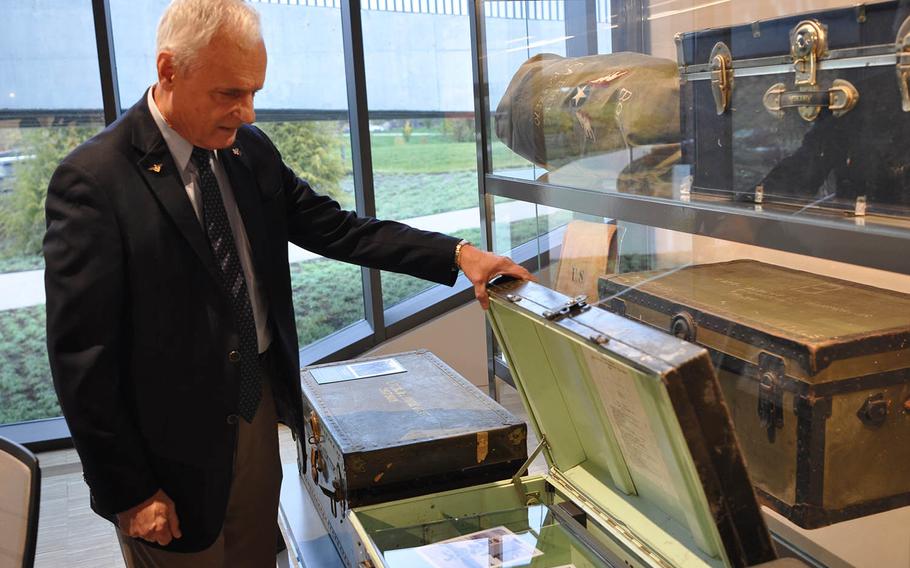 Retired Air Force Col. Thomas Moe, a fighter pilot in the Vietnam War, opens a trunk at the National Veterans Memorial and Museum containing photos of him and his wife, Christine. When opened, the exhibit plays recordings of the couple reflecting on the moment he left for Vietnam. Moe was captured and kept as a prisoner of war for five years. (NIKKI WENTLING/STARS AND STRIPES) 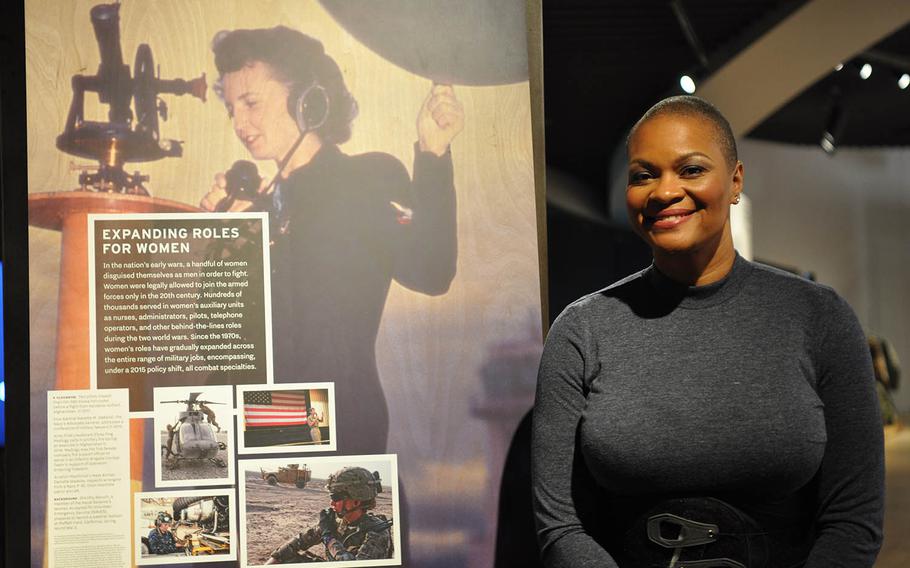 Jaspen Boothe, an Army veteran, was interviewed for an exhibit in the new National Veterans Memorial and Museum in Columbus, Ohio. Boothe, a former New Orleans resident, lost everything she owned during Hurricane Katrina in 2005. The following month, she was diagnosed with cancer. Boothe started an organization, Final Salute, in 2010 to support homeless women veterans and their children. (NIKKI WENTLING/STARS AND STRIPES) 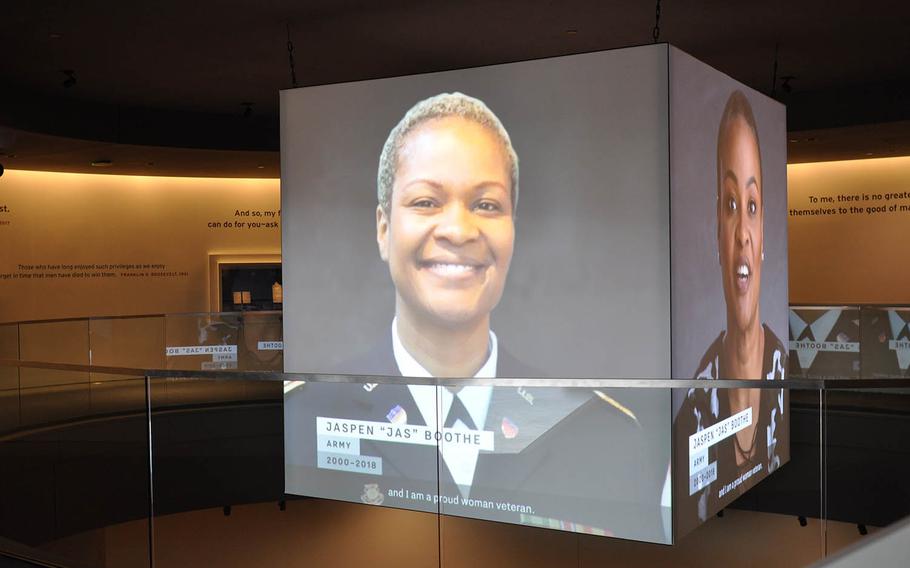 An interview with Army veteran Jaspen Boothe plays on large screens in the center of the National Veterans Memorial and Museum on Oct. 26. The facility opened Oct. 27 in Columbus, Ohio. (NIKKI WENTLING/STARS AND STRIPES)

COLUMBUS, Ohio – Everywhere you look inside the new National Veterans Memorial and Museum, there are stories. Here are three from veterans featured there.

Jason Dominguez sat among his fellow graduates at Ohio State University in 2004, his mortarboard covering his tightly shaved head, ready for deployment.

Dominguez was slated to go to Iraq with Lima Company, an Ohio-based Marine Reserve unit. He received special permission just that morning to attend his graduation.

Dominguez was determined to start his deployment. He enlisted in 2000 and had been ready to enter the fight since the 9/11 terrorist attacks.

“9/11 happened, and that day I literally packed up my stuff, put it in my car, put my dog tags on and waited for the call,” Dominguez said. “I wanted to go. Our country had been hit, and many of us wanted to do something about it. But the call didn’t come until much later, at the end of 2004.”

During the graduation ceremony, Dominguez sat next to a woman who was moving to New York City for a marketing internship. On his other side was a man wanting to pursue a career in football. When it was Dominguez’s turn to share his plans, he told them he had “a great opportunity overseas.”

“Finally, I said I was going to Iraq and showed them my freshly shaven head,” Dominguez said. “It was a sobering moment. … life still goes on over here in the U.S. But there’s a cost to that, there’s a price for freedom.”

Dominguez deployed in 2005 and went on to become a squad leader in “Lucky Lima,” named for its uneventful first weeks in Iraq. After enduring devastating losses -- 22 Marines and one Navy corpsman within several months -- his Reserve unit quickly became the face of the Iraq War.

Jaspen “Jas” Boothe, a member of the Army Reserve, was living in New Orleans preparing to deploy to Iraq, when Hurricane Katrina hit in August 2005.

She lost her home, and soon after, her health. One month after the hurricane, she was diagnosed with head, neck and throat cancer. She was homeless, jobless, a single parent trying to care for her son, and unable to deploy.

Boothe quickly discovered there were no services available specifically for homeless female veterans and their children. But three years later, Boothe – with a new home in Missouri and her cancer in remission – found herself in a position to help others.

She deployed to Kosovo with the Missouri National Guard in 2008. There, she met a woman – a housekeeper she was tasked with keeping safe. The woman was pregnant with a girl, and Boothe asked whether she was having a baby shower.

“Her friends and family were having enough of a hard time trying to feed themselves,” Boothe said. “For me, it was like, ‘Every mom deserves a baby shower.’”

Boothe planned a Disney princess-themed shower and used interpreters for the games.

“I just feel like, you know, a guy wouldn’t have thought of that,” Boothe said. “He just wants to keep her safe; he doesn’t give a shit about a baby shower. We just think different, and I think that’s what makes the military great. You have a diverse group of people who think different.”

Boothe would later expose the insufficient aid for homeless female veterans and establish an organization to call attention to the problem.

“Our current days as a country, people are complaining about things that are wrong and broken,” Boothe, now 40, said. “We need more people who are problem solvers.”

“Happiness is to be in a room where the door handle is on your side.”

Retired Col. Thomas Moe credited a friend for saying that first, but it applies to him, too.

Moe, who flew 85 combat missions during the Vietnam War, was captured and held as a prisoner of war for five years in the “Hanoi Hilton,” a notorious North Vietnamese prison camp for American troops.

For nine months, he was isolated in a room the size of a small bathroom, the walls painted black, with only a single lightbulb. Later, Moe was allowed to enter a larger room with other POWs. They kept each other company; he taught them German, and they gave history lessons, discussed movies and told stories.

Moe bided his time by drawing designs for a home – a place where he could choose whether the doors were locked.

When he was released in March 1973, it had been nearly six years since he saw his wife, Christine, and daughter, Connie, who was 3 months old when he left for the war.

Christine Moe was back in Ohio during the years of her husband’s imprisonment, working, raising their daughter and saving money. When he returned, they took that money and bought a plot of land in Lancaster, about 30 miles southeast of Columbus.

Moe remained in the Air Force for 12 more years, and he continued flying. He insisted the military allow him to fly combat missions.

Eventually, the couple built the house Moe had designed in his cell in Hanoi.