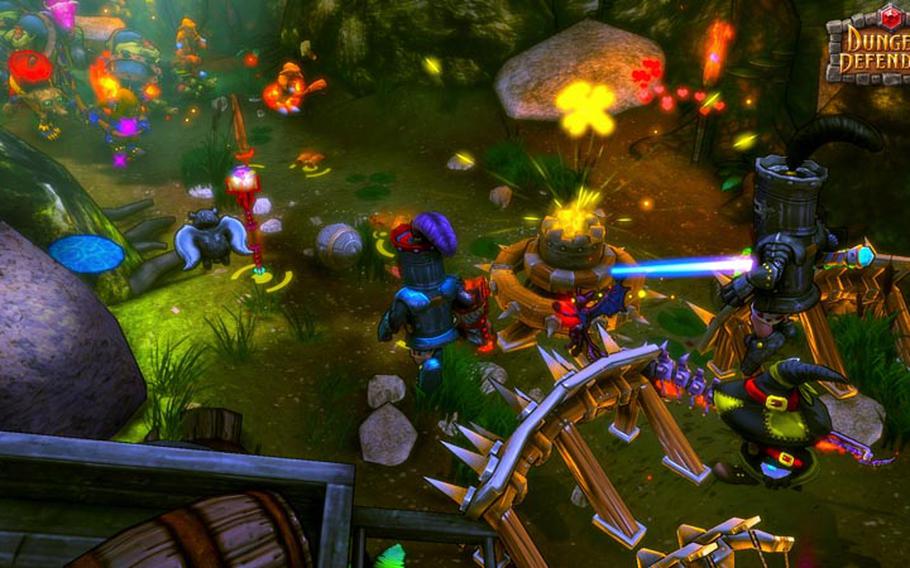 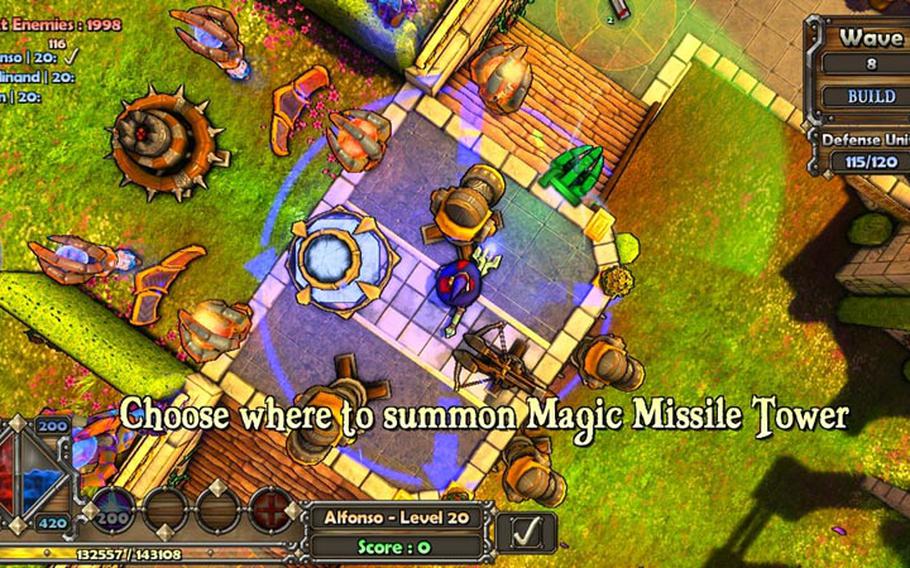 Players are given a build phase to plan out and execute the perfect tower layout. (Courtesy of Trendy Entertainment) 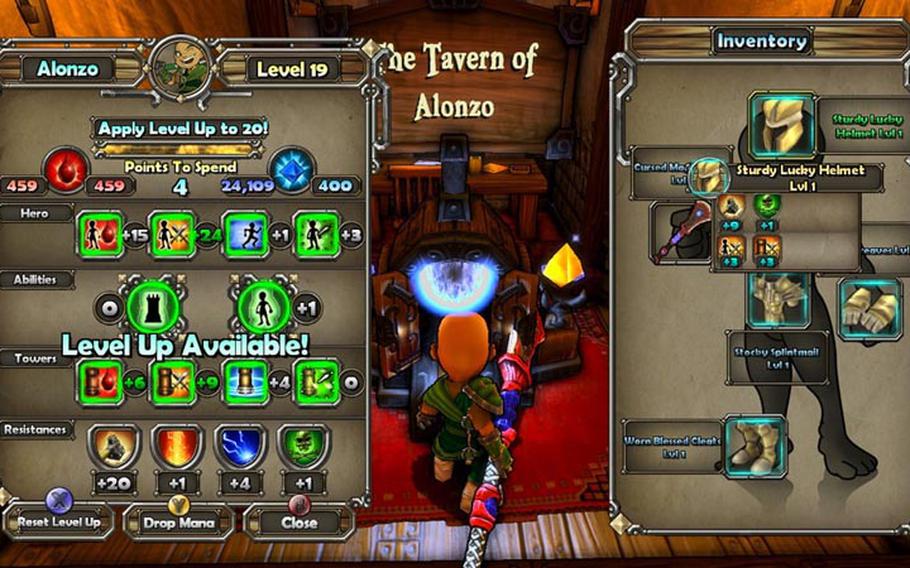 Both characters and items can be leveled-up in Dungeon Defenders, adding great variety and longevity for each character class. (Courtesy of Trendy Entertainment) 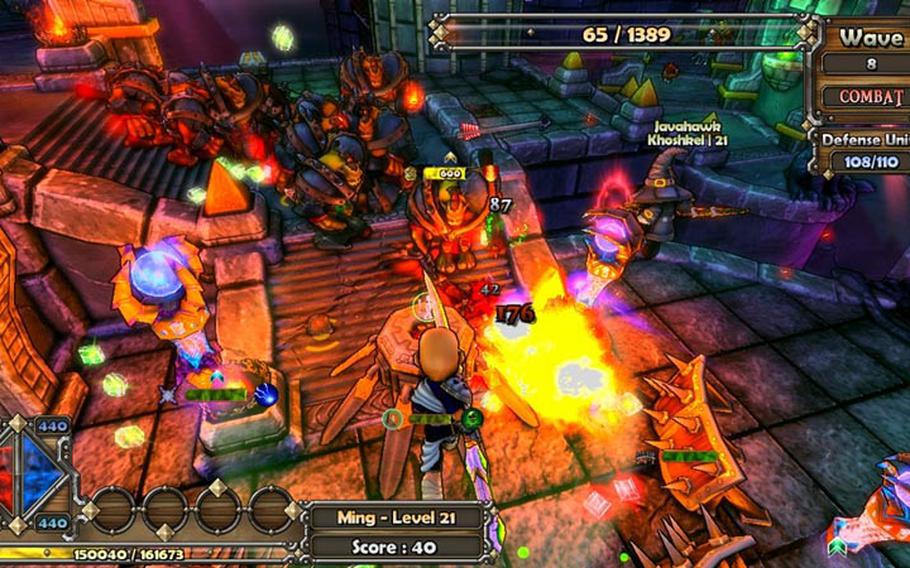 On harder settings, defenders are tasked with fight off baddies thousands at a time. (Courtesy of Trendy Entertainment) 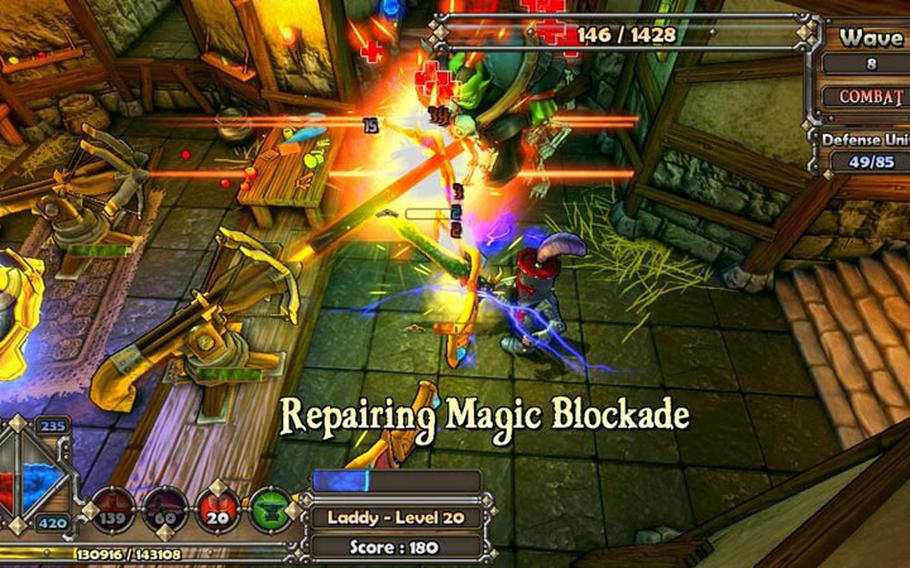 Players must juggle attacking baddies and repair their towers during combat phases. (Courtesy of Trendy Entertainment)

In life, you can make a sandwich, or you can build a tower of food excellence that would make Frank Lloyd Wright proud. Not just two slices bread. It&rsquo;s bread, then meat, then three &mdash; wait, four &mdash; types of cheese, then lettuce, tomato, bacon &hellip; more meat &hellip; and perfection.

&ldquo;Dungeon Defenders,&rdquo; a downloadable, co-operative tower defense game with RPG elements, is like that sandwich from heaven. Each tasty bit of this game builds on to the classic tower defense experience to make something the gaming world has never quite tasted before: A rare title that tries everything and accomplishes everything near perfectly.

And just like that perfect sandwich, hungry gamers will find it&rsquo;s going to take a deliciously long time to eat.

Defenders might not quite play like a tower defense you&rsquo;re familiar with. Instead of creating or shifting enemy paths &mdash; like &ldquo;Sanctum&rdquo; &mdash; you&rsquo;re building turrets, planting spells, and putting walls up to stall enemies. It&rsquo;s a bit like &ldquo;Plants vs. Zombies,&rdquo; at least for the first bite.

The defending occurs in waves, broken up by building phases. Players spend mana, either found on each level or dropped by baddies, to build up more defenses or improve the ones they&rsquo;ve got. This might all be boilerplate to experienced tower defense players until Trendy Entertainment throws on the next piece of cheese: experience points.

Picking from a playful handful of characters, melee-focused squire, magic-wielding apprentice, tricky monk and ranged huntress &mdash; players level up and build on character or tower abilities as they progress. Each character also picks from hundreds of items (magic staffs, swords, crossbows, scrappy boots or even helper dragons) which also can be leveled-up &mdash; creating a breadth of possibilities down the line.

Aggressive squires might want to ignore towers stats altogether to become uber-melee knights. A well-rounded Monk might focus on speed, setting slow traps and healing their friends. A tricky huntress could be nimble, invisibly repairing traps while hurling grenades or arrows from behind enemy lines.

Visually, the game holds its own where it counts: sporting a playful character design that both allows the game to look good and not take a performance hit when things ramp up. Built on the Unreal 3 engine, levels are cleverly populated and detailed in a medieval style. The vibrant explosions of your defenses and projectiles contrast nicely to the castle setting, and that helpful sort of contrast extends to enemy design as well. Rather than rely on a more mature, realistic look, baddies are shaped to be very distinguishable from far distances with an almost cartoony appearance. It&rsquo;s a deceptively light-hearted and approachable look to what&rsquo;s actually a deep, difficult game to master.

Like building the perfect sandwich, mastering the game will definitely take some time. Dungeon Defenders sports about a dozen levels already &mdash; with just as many extra &lsquo;challenge&rsquo; levels for experienced players &mdash; and even some player-versus-player action once you&rsquo;ve finally reached level 70. Not only that, but more DLC has already been released, and there&rsquo;s more defending on the on the horizon with: higher level caps, more items and even new characters all promised.

Even a few weeks after the launch, Defenders still isn&rsquo;t a game without glitches. Since its release, I&rsquo;ve steadily been kicked off of Trendy Entertainment&rsquo;s &lsquo;ranked&rsquo; servers, which is where you&rsquo;ll want to be unless you plan on playing only with friends. There are also a handful display and configuration bugs &mdash; some settings won&rsquo;t stick unless set at the right time or on the right screen; and sometimes things like item information will overlap in your inventory, making it difficult to compare stats.

However, these are small-time crumbs compared to what Defenders achieves technically. Not only is this game rare to be a co-operative tower defense, it&rsquo;s also the only co-operative tower defense I can find that supports players popping in and out of gameplay on the fly &mdash; across consoles and the PC &mdash; both locally and online at the same time. For that in and of itself, Trendy Entertainment deserves special recognition. For everything thing else they&rsquo;ve put in this game, they deserve your $14.