Buy Photo
Passengers scream as they zoom past an on-ride photo section at Thunder Dolphin, a 90-second powerhouse of a roller coaster at Tokyo Dome City Attractions in the heart of Tokyo. (Leon Cook/Stars and Stripes)

Buy Photo
Passengers scream as they zoom past an on-ride photo section at Thunder Dolphin, a 90-second powerhouse of a roller coaster at Tokyo Dome City Attractions in the heart of Tokyo. (Leon Cook/Stars and Stripes) 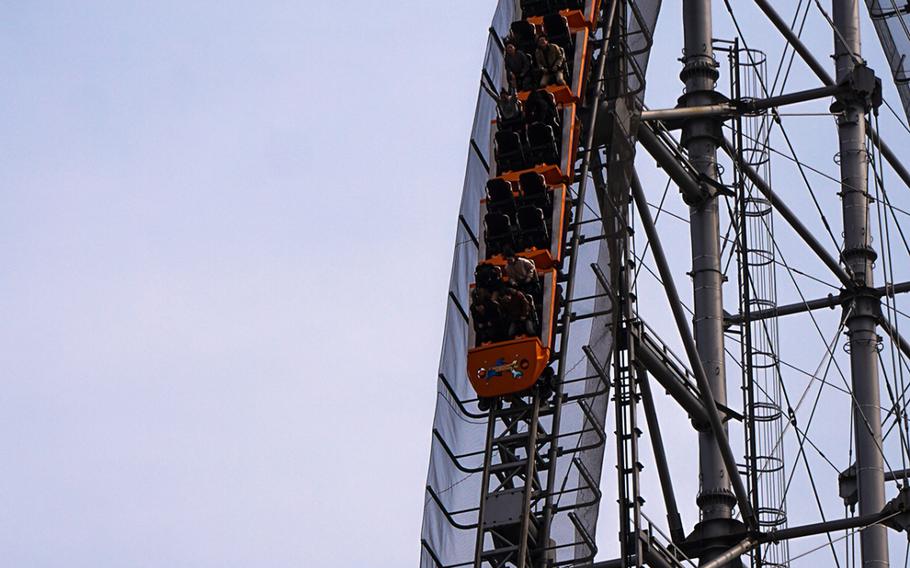 It's named for a friendly sea mammal, but a ride on this roller coaster at the Tokyo Dome City theme park will set your heart racing.

The ride is confined to a relatively small space in the heart of Tokyo, but that only seems to have inspired its creators to ramp up the excitement.

From there, it soars to the top of the Spa LaQua department store and through a cutout in the building itself. After passing through the center of the park’s Ferris wheel, the track curves around and parallels itself, passing again over the top of the shopping center and right next to a section that riders had zoomed past less than a minute before.

The ride takes only a minute and a half and doesn’t go far — just two laps around the park — but it’s a thrilling 90 seconds.

My favorite part of the ride was going through the side of the department store. The curves were so sharply banked that I felt like I was sideways. I was also impressed with the first drop, one of the steepest plunges I’ve taken.

During weekends, you might have to wait for a ride on the Thunder Dolphin, which runs about once every 5 minutes while staff check and double-check restraints and safety devices. Passes to skip the line are available for 520 yen.

The rest of the park has a good variety of family-friendly and more intense thrill rides, including a log flume, swinging ship and a carousel. There’s also a bowling alley and a mind-boggling variety of restaurants — the Tokyo Dome City website lists 70.

The Ferris wheel that the Thunder Dolphin passes through — known as Big O — is the park’s other main attraction. Instead of the traditional hub-and-spoke arrangement, its metal and glass pods are attached to a rotating rail. It lifts riders 200 feet in the air and certain cars are equipped with karaoke machines.

Views from the top are incredible, and watching the Thunder Dolphin tearing by is more impressive from Big O than from the roller coaster itself.

DIRECTIONS: Tokyo Dome City is next to Korakuen subway station on the Marunouchi and Namboku lines, and Suidobashi Station on the Chuo line.

COSTS: Admission to the park is free. Thunder Dolphin costs 1,030 yen per ride. Guests can purchase a pass for unlimited rides for 3,900 yen.