Take in beautiful views of Rome from these lookout points 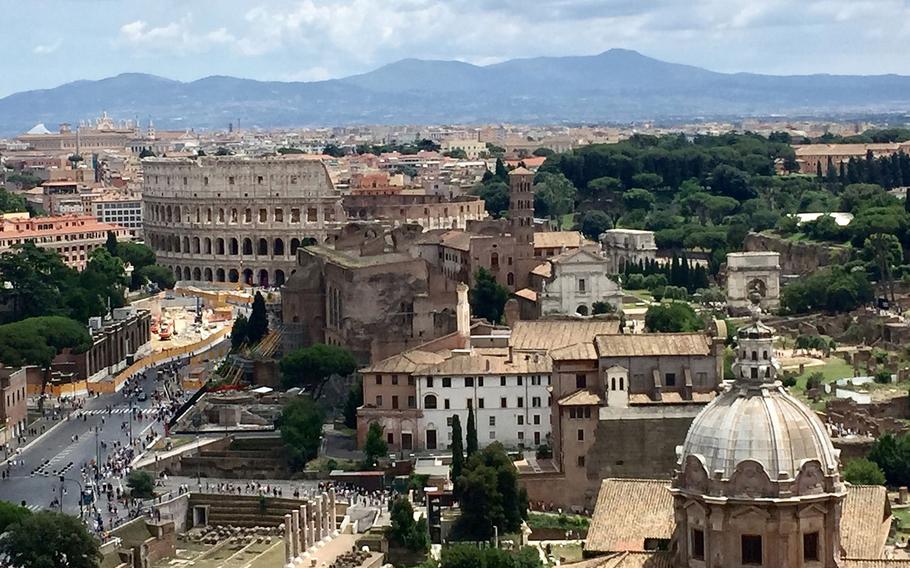 The rooftop terrace atop the Altar of the Fatherland offers some of the best panoramic views of Rome. (Scott Wyland/Stars and Stripes)

The rooftop terrace atop the Altar of the Fatherland offers some of the best panoramic views of Rome. (Scott Wyland/Stars and Stripes) 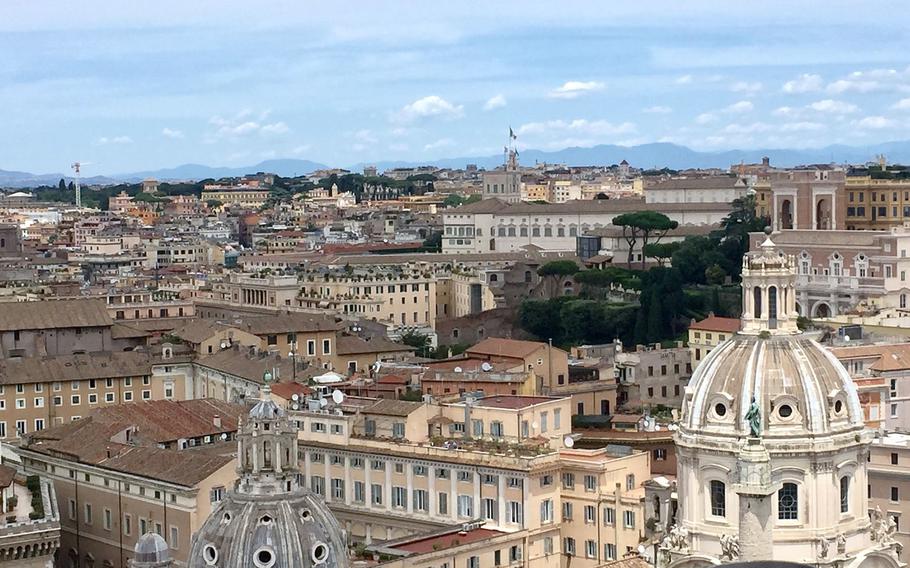 An elevator takes you to the rooftop terrace on the Altar of the Fatherland, where you can enjoy sweeping views of Rome from different angles. (Scott Wyland/Stars and Stripes) 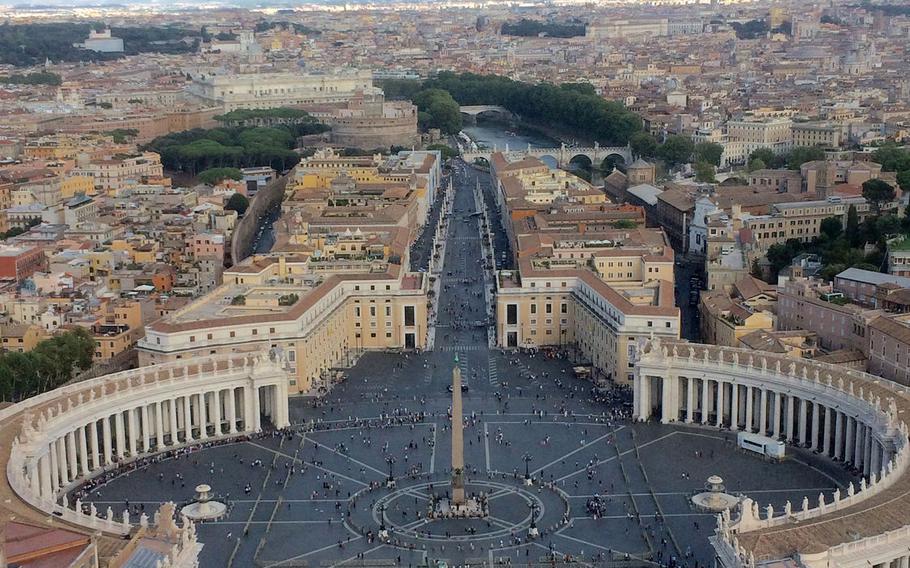 The view from the top level of St. Peter's dome is spectacular. Vatican City, Rome and much of the Lazio region are spread out before you. The hundreds of steps you walk up are worth it. (Scott Wyland/Stars and Stripes) 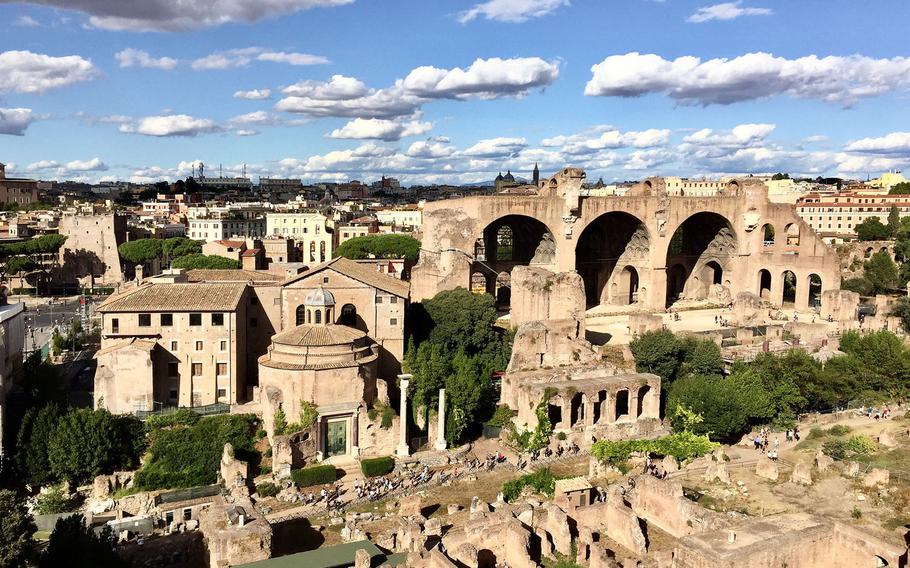 Palatine Hill, across from the Colosseum, gives you the same perspective that emperors enjoyed, including a view of the Forum and Rome's historic central area. (Scott Wyland/Stars and Stripes) 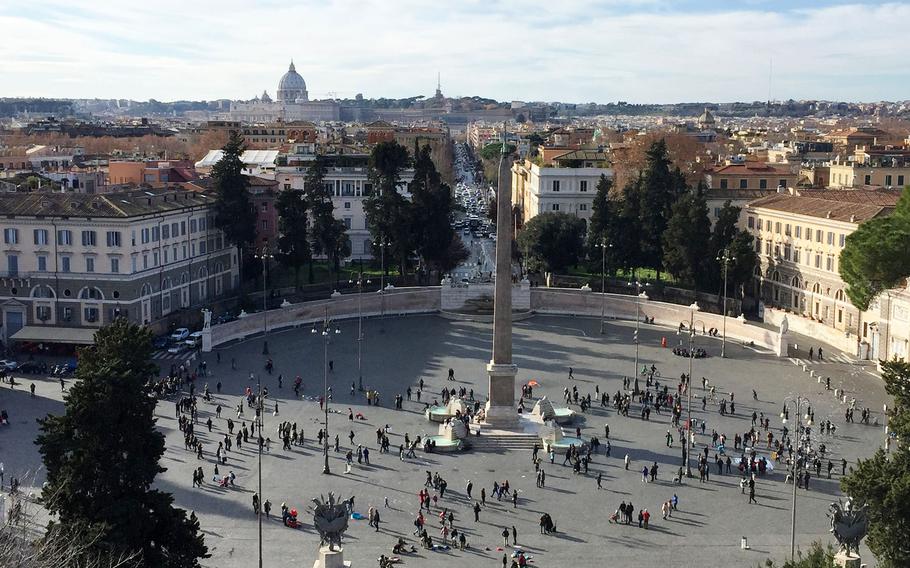 A walk up some stairs and a hill from the Piazza del Popolo takes you to park with several vistas to see Rome's panorama. One of the park's best viewing spots is the Terrazza del Pincio. (Scott Wyland/Stars and Stripes)

Most people travel to Rome to see its aesthetic marvels up close, whether they’re the Sistine Chapel’s frescoes, the Colosseum’s arches or the ornate sculptures in the city’s famous fountains.

But viewing larger expanses of Rome from up high treats you to a more sweeping beauty. The various sections built during different periods in its 2,800-year history form a giant mosaic.

A much-touted vantage point is the Colosseum’s top floor, which opened last year after being closed for decades. But the average cost is about $80 per person.

There are places you can go that offer better views of the city at little or no cost if you’re willing to walk up some stairs or a hill.

St. Peter’s dome St. Peter’s Basilica, completed in 1626, is the largest Christian church in the world and one of the renowned feats of the Renaissance. Michelangelo designed the dome.

You can tour the basilica for free but must pay to ascend to the dome’s top level. You pay 8 euros to walk up all 551 steps and 10 euros if you choose to take an elevator to shave off 230 steps.

It’s a good workout, and your labor is rewarded.

On the way to the top, you walk under the dome and can look down at the crowds milling about in the basilica’s main area. From the top, you gaze out at St. Peter’s Square, Rome and beyond.

Palatine Hill This hill is located near the Colosseum in an ancient part of the city. It is thought to be the birthplace of Augustus, Rome’s first emperor, who built a palace and a temple to Apollo there. Successive emperors such as Tiberius and Domitian also lived in palatial villas there.

Guided tours of the hill are generally bundled with a Colosseum tour for about $60. If you want just the view, you can step onto a fairly steep path in the Forum and walk to the top at no cost.

On one side, Palatine Hill overlooks the former Circus Maximus, where epic chariot races were held. That is now just a bare field. A more sumptuous view is on the side that looks out over the Forum, the adjacent Colosseum and an older section of the city.

You go up several flights of stairs to reach the floor where, for 10 euros ($11.70), you take an elevator to the rooftop terrace. From there, you have a panoramic view in several directions.

There’s often little wait to get on the elevator. This rooftop, which offers perhaps the most all-encompassing view of Rome, is a lesser-known gem.

Pincian Hill This large hilltop park with a large, terracelike lookout point was created about 1820. Its name comes from the Pincii family, which lived there about the year 400.

At the Piazza del Popolo, you walk up a stairway and then a moderately steep path. It gives you a clear, bird’s-eye view of the Piazza del Popolo as well as an array of churches, including St. Peter’s Basilica. The domes, bell towers and the buildings’ reddish-brown, yellow and brown hues make this view especially striking.

DIRECTIONS: The sites listed here are within walking distance of Centro Storico, the city’s core area. You also can take a taxi or bus to these sites.

COSTS: Altar of the Fatherland’s elevator costs 10 euros ($11.70). St. Peter’s Dome costs 8 euros to ascend entirely by stairs, and 10 euros for an elevator part of the way. The Colosseum’s upper-floor tours cost 70-90 euros. Look at TripAdvisor for tour options.

FOOD: A variety of restaurants can be found near all of the spots listed.

INFORMATION: or information online about the Altar of the Fatherland: tinyurl.com/yce2r9cv.