Take a spooky, informative journey through the city’s most haunted areas on a Norwich Ghost Walk People gather in front of the Adam and Eve pub in Norwich before the Norwich Ghost Walk Tour on Sept. 24, 2019. (Christopher Dennis/Stars and Stripes)

People gather in front of the Adam and Eve pub in Norwich before the Norwich Ghost Walk Tour on Sept. 24, 2019. (Christopher Dennis/Stars and Stripes) 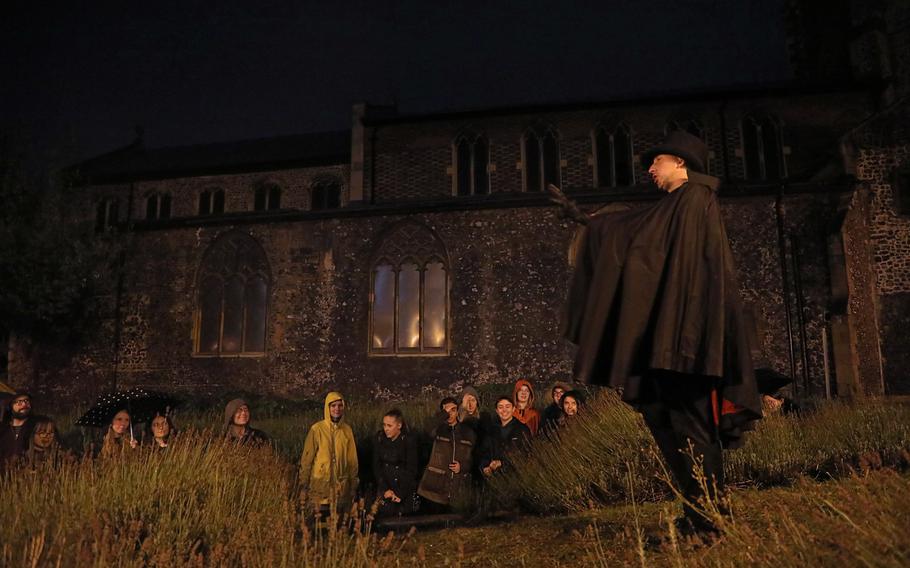 Le Morte describes what happened when the plague raked through Norwich in the 16th century, during a Norwich Ghost Walk Tour in the Tomb Alley area of Norwich, Sept. 24, 2019. (Christopher Dennis/Stars and Stripes) 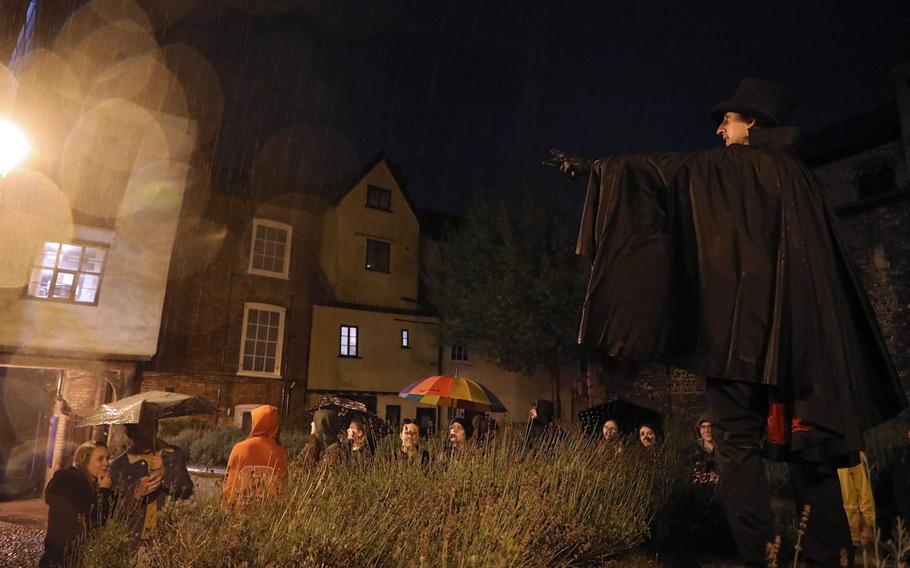 I’ve never been a fan of Halloween, but I do like history and historical architecture. Add a dash of comedy and interaction to those, and you have the Norwich Ghost Walks.

They’re a ghastly good mix of fun, spookiness and history wrapped up in a stroll through the center of Norwich, England, where the walks have been held for more than 20 years.

Ghost Walkers can choose from three walks, all of which start at 7:30 p.m. in front of the Adam and Eve pub, which is near the cathedral, the Great Hospital and the Wensum River that meanders through the city.

I took the Elm Hill Walk on a rainy Tuesday night. We went around Norwich Cathedral and into Tomb Alley, the site of a mass grave for victims of the plague in the late 16th century.

Two dark figures walked up to the pub before the tour started. We learned that they were the Silent Hand, a tall cloaked woman who was the organizer, and our guide for the night, Le Morte, a skinny, rakish figure in a black top hat and cape adorned with silver skulls.

From the beginning of the walk, Le Morte kept the mood hauntingly light but fun, regaling us with tales of the dead and incorporating walkers into his stories as we made our way along the cobbled streets of the city.

The stories he told covered everything from murder to mass graves, headless horse riders to secret tunnels and other appropriately spooky subjects, made all the more haunting by being told in the dark of night.

We ended up in a dark area behind Norwich Cathedral — under a tree that was once used for suicides and would curse you if you touched it, according to Le Morte — where members of the walking group were invited to share personal experiences with the supernatural.

The night I went on the walk, there were almost 30 people in my group. “The people who attend are about a 50/50 mix of locals and tourists,” said the Silent Hand, that tall, cloaked organizer I mentioned earlier.

The tours are not long walks, but you will be on your feet for around two hours on old English cobblestone streets, so bring a good pair of walking shoes or boots and an umbrella if there’s rain in the forecast.

While well-behaved pets are allowed on the walks, according to the Norwich Ghost Walks website, you will be outside the entire time, so bringing pets and very young children might not be a good idea.

There is plenty of parking available across from the pub, but bring 2 pounds (about $2.50) or a little more in change to pay for it. If you arrive after 6:30 p.m., all-night parking is available at a reduced rate.

Norwich Ghost Walks also conduct private shows and a Halloween event at the Cow Tower park near the pub from Oct. 29 to Nov. 2.

COSTS: The tour costs 8 pounds (about $10), and concessions are 6 pounds; make sure to bring a few pounds in coins for parking.

FOOD: Can be purchased at the pub.