Buy Photo
This dish of almond chicken was served during a recent visit to Tai Ji Food Fusion Restaurant in Aviano, Italy. As is typical in Chinese restaurants in Italy, if you order a dish such as almond chicken, that's essentially what you get. Don't expect vegetables unless you're ordering vegetables. (Kent Harris/Stars and Stripes) 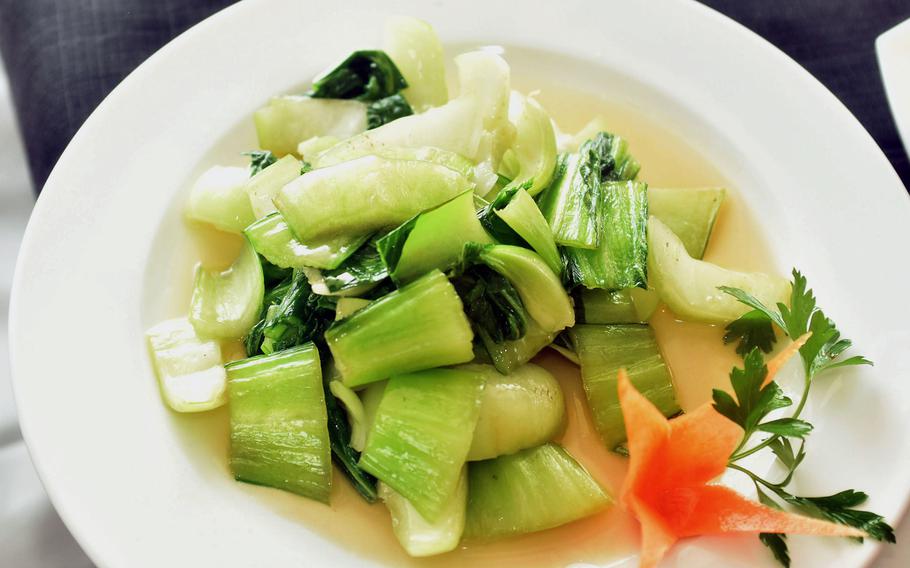 Buy Photo
This plate of bok choy was served during a recent visit to Tai Ji Food Fusion Restaurant, a business that's been open for three months. (Kent Harris/Stars and Stripes) Buy Photo
Zheng Jungling and Ying Wei operated a Chinese restaurant in Aviano, Italy, for almost two decades. Three months ago, they reopened their restaurant with a new name and at a new location. (Kent Harris/Stars and Stripes)

The restaurant is technically the newest in town, having opened its doors just about three months ago.

But Zheng Junling and Ying Wei are no strangers to the restaurant business in Aviano. They operated a Chinese restaurant just a few blocks away for almost two decades.

Their new location carries a new name — Tai Ji Food Fusion Restaurant — and sports a new menu, with an array of Japanese dishes (including sushi) joining an already large selection. That seems to be a trend at Asian restaurants in this area of Italy: diversity.

There are likely more Chinese restaurants around the country than any other non-Italian options. But getting Italians to come through the door seems to be somewhat of a challenge. And young Italians seem to want to dine on sushi more than traditional Chinese food.

Zheng, who acts as hostess, said business from Italian customers had picked up at the new location, which resembles something out of a strip mall in the States. The former location, just a few minutes’ walk away, is in a much older building. It might have had more character, but there wasn’t as much room and it was showing its age in some respects, Zheng said.

Americans still make up the bulk of the customer base, though the food — cooked by Wei — is a bit blander than one might find in China or even many spots in the States. Past conversations with owners of other foreign-themed restaurants locally — such as Mexican and Indian — suggest that Italians don’t enjoy a lot of spices that aren’t found in their cuisine.

That doesn’t mean the food is bad by any means. In more than a dozen visits to the restaurant — old and new — the food has always been perfectly cooked and appears to feature quality ingredients.

And it’s hard to beat the price. A family of four can expect to get all the food they’d want for 30 euros ($36) or less — unless you want something a bit more exotic.

Peking Duck or Son Su fish, for example, require days of preparation and need to be requested a few days ahead of time.

Unlike at many Italian restaurants, it’s easily possible to get in and out during a lunch hour. But the food isn’t already cooked and waiting buffet-style as it is at most other local Chinese places. The Tai Ji is often more crowded at dinner time, and it can take a bit longer to get served. But Zheng jokes that most Americans are finished with their meals by the time that Italians start to arrive anyway.