Symptom of a rough electronic records system rollout: Slow Rx fills on base 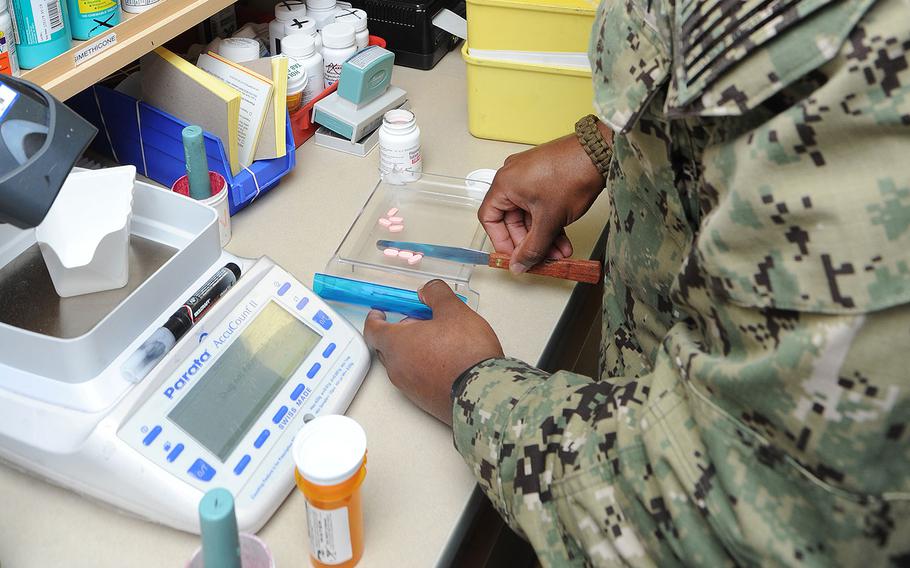 Tricare users filling prescriptions at test sites for MHS Genesis are likely the patient group most frustrated by the new electronic health record system, which is commercially designed and to be phased in across all of military health care by 2022 and adopted as well to modernize record keeping in the VA health care system.

“With the [new] system for pharmacy it’s an all-day event” to get a new prescription filled, complained Alice Dowie, a retired Air Force Reserve officer who uses Madigan Army Medical Center on Joint Base Lewis-McChord near Lakewood, Wash. “You can take a number, go to the PX, go to the commissary, have lunch and still have a wait when you return. Not customer friendly for sick people.”

“Pull a ticket [at the pharmacy] and I’ve waited as long as three-and-a half hours” to fill a new prescription, said retired Army Warrant Officer Roy Peterson, 74, who resides an hour from Madigan in Graham, Wash. “Now I’ve gotten smarter. When I go to the hospital, if I think I’m going to get a new prescription, I’ll pull one of those tickets right away. But when I finished with my appointment, I’ll still wait two more hours before I’ve got my prescription.”

Pharmacy staff at Madigan and Oak Harbor answered a series of questions we posed to learn why the new electronic record has, at a minimum, tripled wait times for prescriptions. Air Force Col. (Dr.) Thomas Cantilina, acting functional champion for MHS Genesis at the Defense Health Agency, also shared his insights.

Overall, however, it was an unpleasant week for those associated with the $4.3 billion MHS Genesis contract after the online news site Politico reported on an April 30 “partial” assessment of the new system prepared by Robert F. Behler, the Defense Department’s director of operational test and evaluation.

Madigan was the lone test site of the four not assessed by the test team but will be later this year. In a news conference Friday, officials tasked with fielding MHS Genesis suggested the test director’s critique was more helpful than alarming, part of a planned process to use expert and user feedback to improve the system at every step of phased deployment emphasizing safety and quality health care.

Not one thing the test directorate unveiled in its 16-page report “surprised us because we were so in lockstep communicating with” the four test sites during system rollout, said Stacy A. Cummings, the program executive at the Defense Department responsible for modernizing the military’s health record system.

Cummings noted, however, that the testing done was completed in late 2017, and that Genesis has benefited since then from multiple changes to work flow and revised system rules to accommodate a vast and complex health network.

“We think that the test community gave us the recommendations we would have given ourselves, which is we need to do some work, we needed to test it, and further deployment [to military facilities in Western states] is not scheduled to happen until 2019, so we remain in line with our acquisition timeline,” she said.

On the slowdown in prescription fills, Cummings and Cantilina acknowledged that the Cerner software, widely used in the commercial sector, has forced on-base pharmacies to change work flows and to use enhanced safety checks, increasing tasks for pharmacists and diminishing the role of pharmacy techs.

Under legacy system rules, military physicians could only prescribe medicines stocked at base pharmacies. So care providers, in effect, did a required first check on availability of drugs, in required dosage, using drug inventory data for the base.

As a physician, Cantilina said, “I was in essence doing the pharmacist’s job in our legacy system, something you would never see in the commercial world.”

Under Genesis, physicians prescribe from a wider array of drugs, so base pharmacists now must take the extra step of ensuring that the medicine prescribed, or an appropriate substitute, is in stock, in the right dosage, before accepting the prescription — in addition to verifying, later in the fill cycle as they always have, that the right medicine has been pulled, bottled and is ready to dispense.

The pharmacy at Fairchild’s base hospital was the first to go live with Genesis early last year. System designers elected not to pre-load National Provider Identification (NPI) codes of every civilian physician writing prescriptions for military beneficiaries. This left the Fairchild pharmacy staff to find and enter into MHS Genesis the unique provider code, with every prescription presented from a civilian doctor. This added to patient wait time for every new prescription filled.

“In our legacy systems we had thousands of downtown providers with an associated NPI. Initially we did not transfer or load them because we wanted a clean start of the data in MHS Genesis system,” Cantilina said. On seeing the impact, however, a lesson was learned and legacy NPI codes were preloaded for Oak Harbor, Bremerton and Madigan.

Today at Fairchild, prescription fills average nine minutes, lower than the 12-minute average before MHS Genesis, Cantilina said. He credited improved automation and a reorientation of staff to maximize efficiency. Prescription fill times remain high at the other test sites, particularly at Madigan, which serves a large retiree population, and Oak Harbor, maybe “because they’re on an island,” he said.

At Madigan, wait times “increased nearly three-fold in the first few months following MHS Genesis go-live in October 2017,” officials said. After peaking in January, wait times improved, but are still greater than pre-MHS Genesis. This is largely due to added safety checks on the new system. Madigan hired more pharmacists but wait times remains longer under the legacy record system.

At Oak Harbor, before Genesis, prescriptions for active-duty patients were filled in 10 to 15 minutes and non-active-duty in 20 to 30 minutes. Average wait times grew to 105 minutes two months after go-live, officials said, before work flow changes, more staff and system familiarity lowered the average to 35 minutes.

Wait times rose again, to 50 minutes on average, when Tricare co-pays for prescriptions filled by mail order or at retail outlets jumped Feb. 1. The base pharmacy, where medicines are still dispensed for free, saw a 30 percent pop in total number of prescriptions written by civilian providers in the Tricare network.

“Unfortunately, the types of prescriptions returning to the MTF from Home Delivery are polypharmacy, maintenance medications which are more complex to process and therefore have a disproportionally high impact on wait times,” Oak Harbor officials explained.

Behler’s test report said that pharmacists, “in particular, found the [new] system difficult to use” and saw workdays extended “due to longer prescription order workflows” and “interface problems” between MHS Genesis and safety check sources.

Commanding officers at both Oak Harbor and Madigan said start-up difficulties are being addressed, though pre-MHS Genesis wait times won’t return soon. The new system, however, has deepened safety checks and added features, including the ability for base pharmacies, when they can’t fill a prescription, to send it electronically to Tricare mail order if beneficiaries agree to accept the co-pay.