Swim, rappel, jump or hike to get through canyons on a tour in Japan's Gunma prefecture 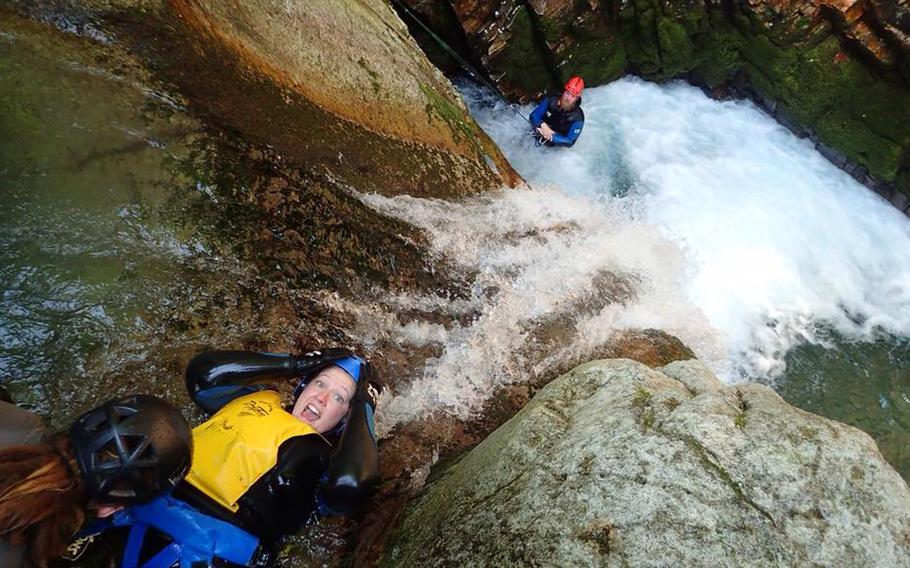 Stars and Stripes reporter Caitlin Doornbos screams before sliding backwards and head-first down a waterfall. Canyons tour guides are very experienced and teach daredevils how to take adventurous risks safely. (Courtesy of Canyons)

Stars and Stripes reporter Caitlin Doornbos screams before sliding backwards and head-first down a waterfall. Canyons tour guides are very experienced and teach daredevils how to take adventurous risks safely. (Courtesy of Canyons) 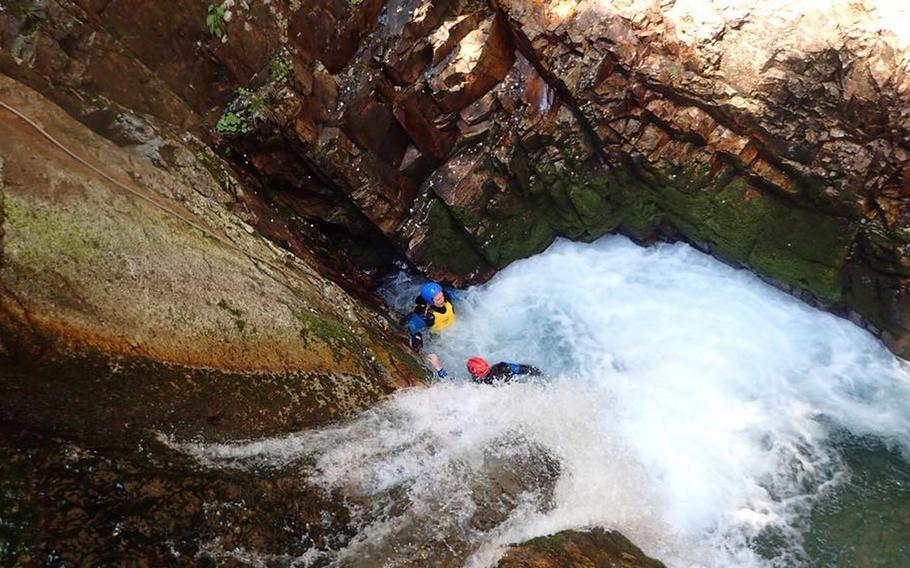 Canyoners take a break in the pool below a 20-foot waterfall. The water is deep enough to dive into head first. (Courtesy of Canyons) 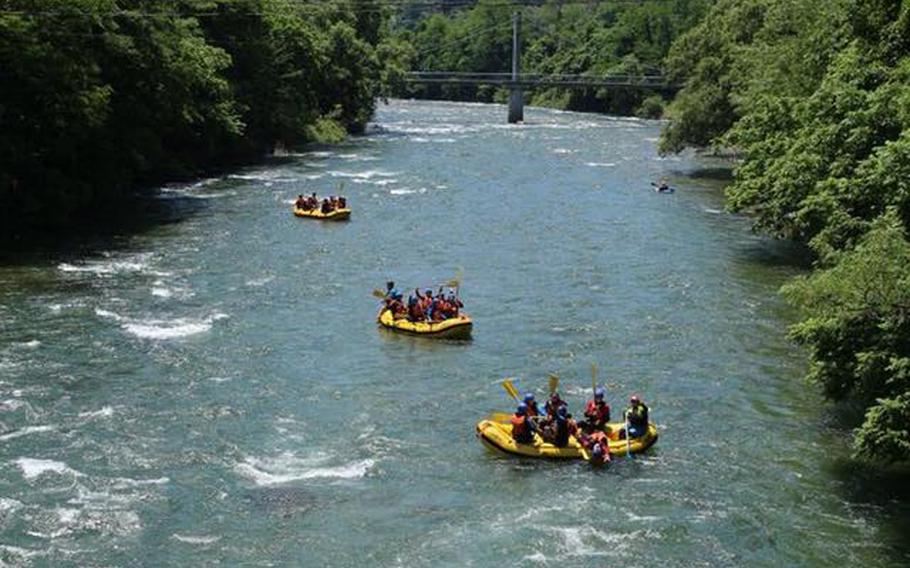 Canyons also offers whitewater rafting excursions throughout Japan. In this photo, three groups of rafters from Yokosuka on an MWR trip in June float down the Tone River among the mountains in Gunma Prefecture. (Courtesy of Canyons) 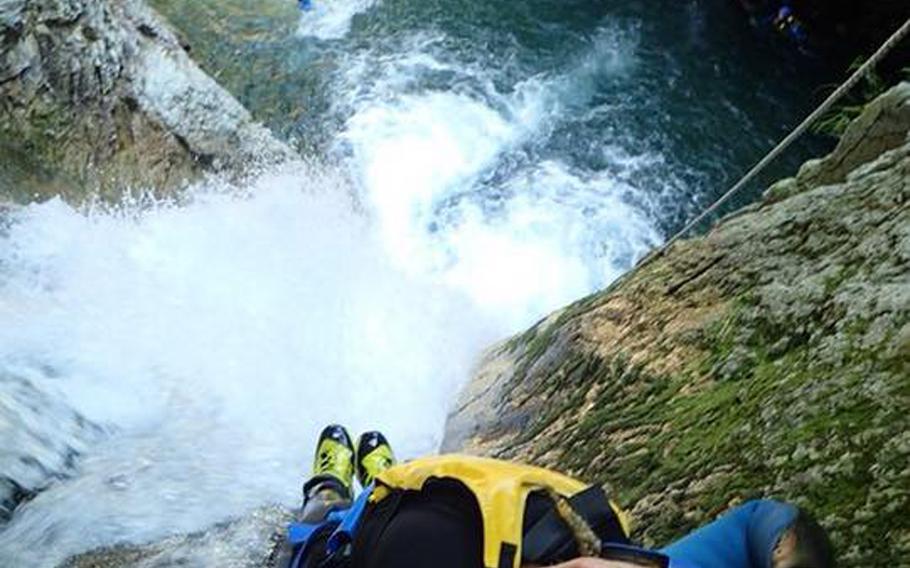 Stars and Stripes reporter Caitlin Doornbos rappels down a 20-meter waterfall before dropping into the water on a Canyons tour. Canyoning encompasses many forms of traveling through canyons, including climbing, swimming, rappelling and jumping. (Courtesy of Canyons) (Courtesy of Canyons) 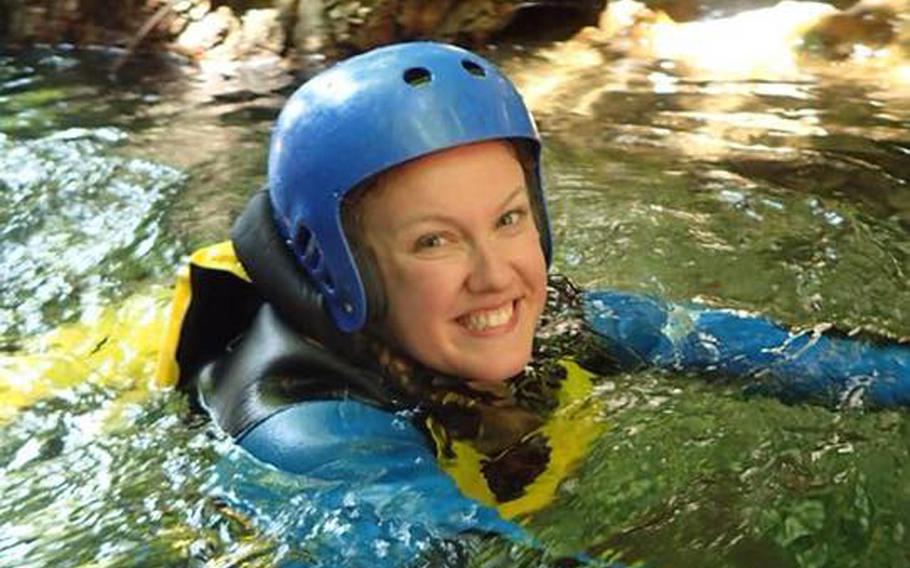 Stars and Stripes reporter Caitlin Doornbos swims during a canyoneering expedition with Canyons in Japan's Gunma Prefecture. (Courtesy of Canyons)

About a half-hour into my canyoning tour in Japan’s mountainous Gunma prefecture, I was conquering fears I never thought I’d face.

Canyons, an outdoor adventure company that operates out of several locations in the Kanto region, allows its guests to plunge, quite literally, into Japan’s natural beauty — and, sometimes, head-first.

If you don’t know what canyoning is, you’re not alone. Before my excursion, I’d never heard of the sport, but assumed it had something to do with rock climbing. As it turns out, I was half right.

Canyoning — more commonly known as canyoneering in the United States — is an outdoor sport in which individuals explore and climb through rock canyons via a variety of methods, including swimming, rappelling, jumping or hiking.

And explore, we did.

For my trip, I opted to explore Fox Canyon, which Canyons suggests for beginners. The tour, which lasted a little over two hours, consisted of wading and floating down sections of the Tone River in a deep canyon surrounded by greenery.

Before heading out, Canyons had us suit up with their gear, which included wetsuits, helmets, gloves, life jackets and swim shoes. All canyoners need to bring are optional swimsuits for underneath the wetsuits and towels to dry off with after.

As my group and I approached numerous waterfalls along the way, our guides would instruct us on how to slide down each one safely to continue with our tour. Wildlife was all around us, with birds chirping in the trees above and fish swimming alongside us.

As we made our way deeper into the canyon, the waterfalls became steeper. It was thrilling to fall with the water into deep, refreshing pools below.

Our tour guides encouraged us to try new positions while sliding down the waterfalls with deep pools at the bottom — like the aptly named Superman pose, which sends canyoners head-first down the waterfalls into the clear — but chilly — water. At the encouragement of the other members in my group, I even jumped off a few cliffs.

Ultimately, we reached the Fox Canyon’s famous 20-meter waterfall — one that’s so tall, canyoners must rappel halfway down before dropping into the pool below. The fall was intimidating, but after conquering my fear, I was quite proud as I slid into the water.

In addition to the basic canyoning tours, Canyons offers whitewater rafting tours of the Tone River, as well as snowshoe tours and skiing trips during the winter. The company also claims to have invented “snow canyoning” — which involves climbing through snow-covered mountains and sliding or sledding down steep “snow chutes” dug into the thick snow.

Once canyoners complete their adventures, Canyons rewards the tour participants with a spread of food and beverages back at the company’s headquarters in Minakami. As I bit into a 1,200-yen hamburger straight off the grill, I felt for a second like I was back home in the States again. The small restaurant there also offers a cash bar, barbecue options starting at 2,000 yen and sandwiches and wraps.

The experience turned strangers into friends and by the time we packed up to leave, my co-canyoners and I were exchanging phone numbers and planning future adventures. We hope to come back to Minakami for another tour next year.

As my canyoning tour ended at the headquarters, I left in a van with my group from Morale, Welfare and Recreation, and others left in their cars. I slept well that night and couldn’t help but reflect on the fears I’d overcome and how I’d jumped all in while enjoying Japan’s beautiful landscape.

CanyonsDIRECTIONS: Canyons has several base camps located in the Kanto region, all within an hour or two of Tokyo: In Tokyo prefecture, Canyons offers tours in the Okutama region. In Gunma prefecture, the company operates in Minakami and Agatsuma.

COSTS: Costs vary by excursion. A half-day canyoning tour through Fox Canyon is 9,500 yen, or about $85.

FOOD: Food is available for purchase at the company’s base camp after each excursion.

INFORMATION: The canyoning season runs April through October. For tour packages offered at each location, and information on seasonal operation, visit www.canyons.jp.