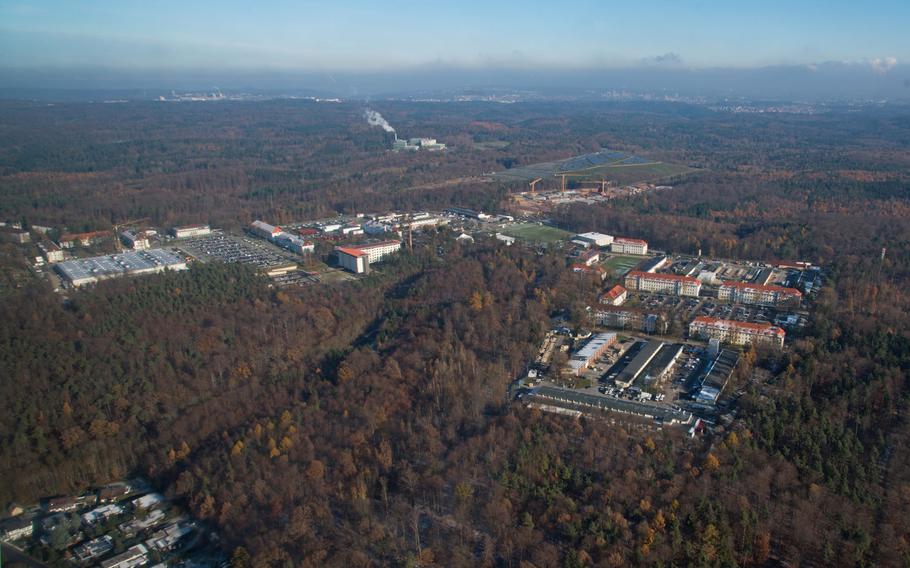 An aerial view of Panzer Kaserne near Boeblingen, Germany. Buildings around the base were evacuated Sunday, Nov. 19, 2017, as a World War II bomb was defused without incident. (Martin Greeson/U.S. Army)

The bomb, which was discovered last week in a wooded area next to the Army’s training center in the town of Boeblingen, forced the evacuation of about 500 residents.

The back end of Panzer Kaserne was cleared Sunday, forcing the shoppette and a few other buildings to close, but base housing was not affected. Flights at the nearby Stuttgart airport were delayed while the bomb was defused. Crews created a protective perimeter of about a half-mile.

If the bomb accidentally went off during the diffusion process, shrapnel could spray for a mile, experts said. For the same reason, a controlled explosion would also pose risks.

“You cannot just take them (the bombs) out, otherwise they’ll go up,” Christoph Rottner, a member of the German ordnance disposal service, told the Stuttgarter Zeitung.

On average, more than 2,000 tons of unexploded bombs and other munitions are found each year in Germany. About 15 percent of the bombs dropped during World War II failed to explode, and many remain buried deep in the ground. Normally, ordnance experts can defuse the rusty bombs without a mishap, but in recent years several experts have been killed.