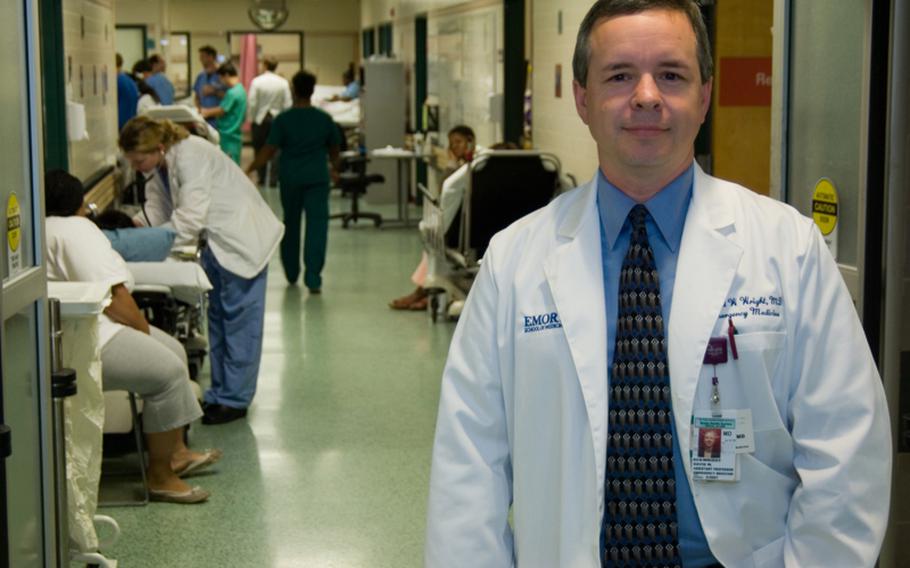 Dr. David Wright, an associate professor of emergency medicine at Emory University in Atlanta, is leading a nationwide study to see if the female hormone prprogesterone can heal heal brain injuries after severe head trauma. (Photo courtesy of Emory University)

Researchers are conducting a nationwide trial to determine whether the hormone progesterone can heal brain injuries after severe head trauma &mdash; a therapy that, if proven effective, could be used on the battlefield.

Though mild traumatic brain injuries are more common, affecting as many as 135,000 veterans of the Iraq and Afghanistan wars, about 5,000 troops have suffered moderate to severe head trauma, injuries that left them comatose or caused large amounts of brain swelling.

&ldquo;The hormone would counteract these bad events and in some cases correct them,&rdquo; said Kathy Helmick, senior executive director for traumatic brain injury at the Defense Centers of Excellence for Psychological Health and Traumatic Brain Injury.

During the trial, patients will be given progesterone &mdash; a hormone best known for its use in the birth control pill &mdash; or a placebo intravenously for four days after injury, and their outcomes will be monitored for six months. It will be the strongest test yet of whether the treatment works, said Arthur Kellermann, now a senior researcher with the Rand Corp., who co-authored a pilot study on progesterone at Emory University in Atlanta.

&ldquo;As a scientist, it&rsquo;s not OK to get ahead of the data,&rdquo; he said. &ldquo;But we are excited and encouraged.&rdquo;

Because progesterone needs to be administered in the few hours after injury, the researchers theorized that progesterone pills or injections could benefit troops injured downrange.

&ldquo;Progesterone is an ideal candidate for treatment of those with moderate or severe brain injury,&rdquo; said Donald W. Marion, an academic neurosurgeon and deputy director of clinical and educational affairs at the Defense and Veterans Brain Injury Center. &ldquo;Because in contrast to most drugs tested to date, it rapidly enters the brain so it can have a direct effect on the injured brain tissue.&rdquo;

And it could potentially be used to treat mild traumatic brain injuries as well, Kellermann said.

&ldquo;My hunch is that if this is successful for really bad cases of injury, it&rsquo;s quite reasonable that it would work when people have a mild brain injury,&rdquo; he said.

For decades, scientists have struggled to find a drug that can treat head trauma, Kellermann said. Several medications had shown promise in animal testing, but all clinical trials in humans had failed.

That was until Kellermann&rsquo;s 2006 study, which set out to show that progesterone caused no significant side effects. The study also provided the first indication that the hormone helped heal brain injuries in humans.

Among the findings of the trial, in which 100 patients with moderate to severe traumatic brain injuries were given the drug or a placebo: Progesterone cut the risk of death by 50 percent, and in moderate cases it improved patients&rsquo; function and reduced their level of disability.

The nationwide trial, funded by the National Institutes of Health and costing up to $27 million, is the largest and most ambitious to date. The trial will enroll 1,140 patients at 17 trauma centers across the U.S., including New York Presbyterian Hospital and Stanford University Medical Center, during the next three to six years.

Results could come sooner, said David Wright, the study&rsquo;s lead investigator and associate professor of emergency medicine at Emory, who also worked with Kellermann on the pilot study. A review board will look at the data after 380 patients are enrolled &mdash; slated to come in the fall of 2011 &mdash; and then after 760 patients.

If the data is positive, Wright said, &ldquo;there is a company waiting in the wings &mdash; BHR Pharma &mdash; that could get it out almost immediately, provided the FDA allowed it.&rdquo;

It is too early in the testing phase to determine when the treatment could reach troops.

The nationwide trial, which has recruited 32 patients since March, is operating under rare conditions allowing doctors to enroll patients immediately at any of the participating hospitals when relatives cannot be contacted to give their consent, Wright said. Wright and his fellow doctors convinced their review boards and the Food and Drug Administration that there wasn&rsquo;t sufficient time for doctors always to speak to relatives because the hormone must be administered within four hours of injury.

Under those conditions, residents near participating hospitals were informed about the study through billboards and community announcements. Also, doctors must attempt to get consent from relatives even after a patient has been enrolled, and a patient&rsquo;s relatives can pull them from the trial at any time, Wright said.

How progesterone protects the brain is something of a mystery, but studies suggest it reduces brain swelling and stops the deadly cascade of chemical changes that follow a brain injury. When the brain is wounded, many electrolytes, such as calcium, overwhelm brain cells.

By halting this flood of chemicals, progesterone blocks what he calls &ldquo;cell suicide.&rdquo;

&ldquo;The reason we think this drug has a chance is it is so robust because it works on multiple mechanisms,&rdquo; he said.

Often described as a sex hormone, progesterone is present in women&rsquo;s and men&rsquo;s brains. Kellermann pointed out that men experienced no harmful side effects when given progesterone, though families of male patients often expressed doubts when told that the experimental treatment consisted of what some people may consider a female hormone.

&ldquo;Everyone thinks of progesterone as a sex steroid,&rdquo; he said. &ldquo;But it&rsquo;s actually a protection hormone.&rdquo;