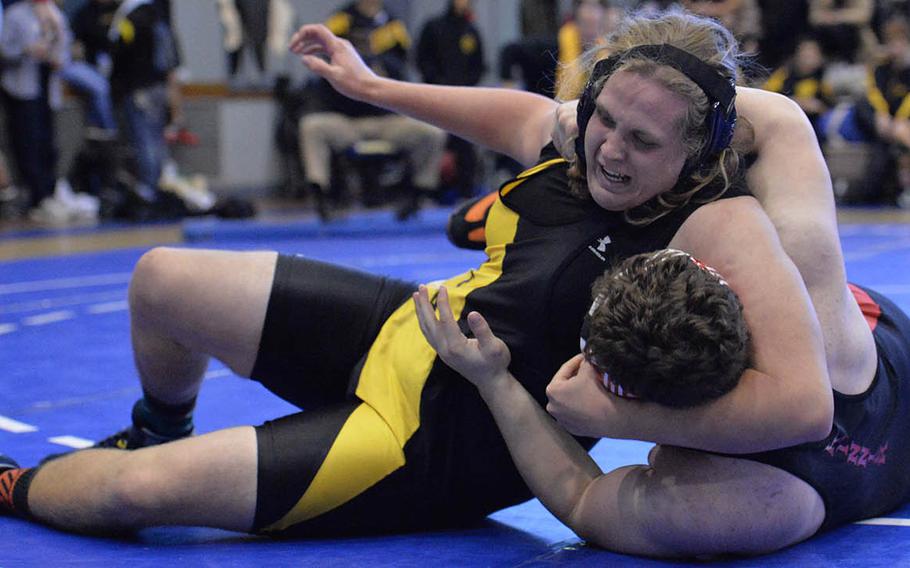 Kadena heavyweight James White and Nile C. Kinnick's Marc Domery, who finished 1-2 in last month's Beast of the Far East tournament, are favored to win gold in this week's Far East tournament at Osan. (Jack Higbee/Special to Stars and Stripes)

Kadena heavyweight James White and Nile C. Kinnick's Marc Domery, who finished 1-2 in last month's Beast of the Far East tournament, are favored to win gold in this week's Far East tournament at Osan. (Jack Higbee/Special to Stars and Stripes) 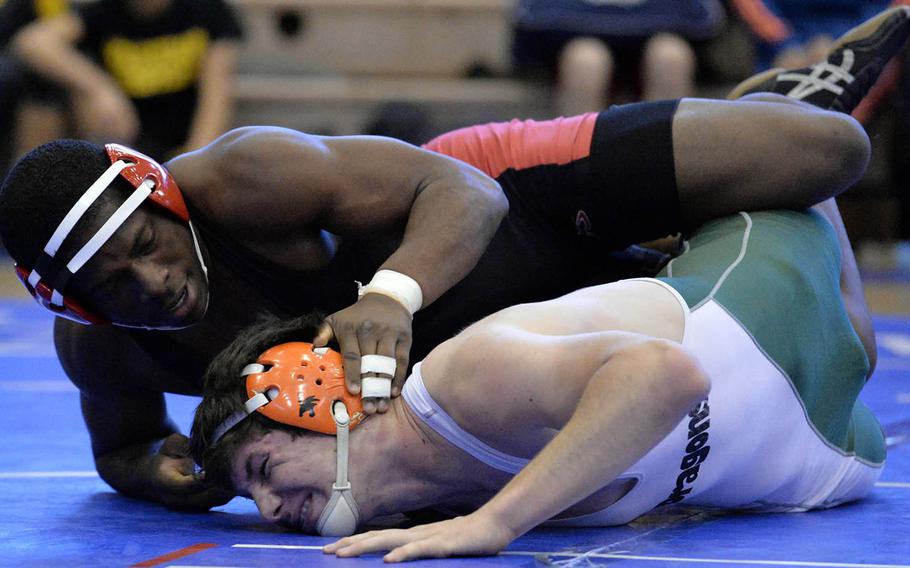 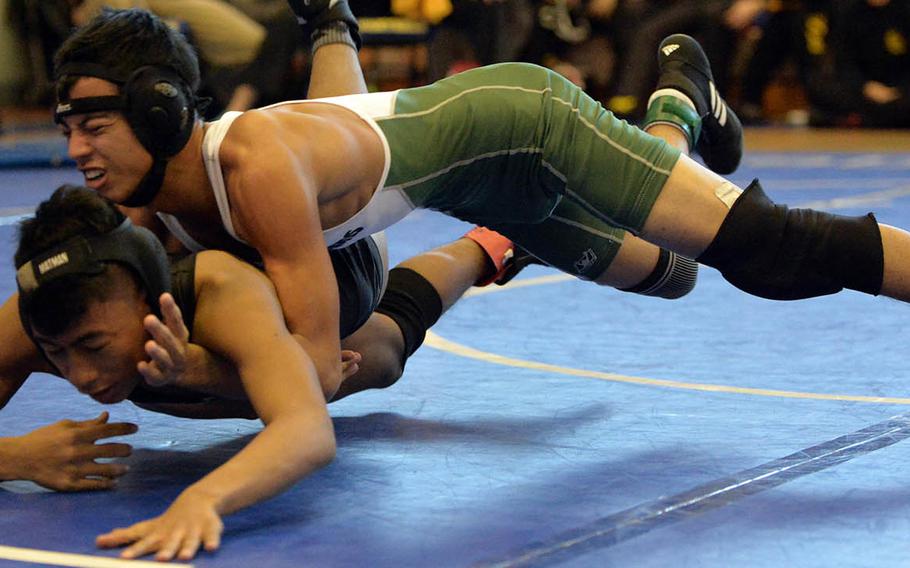 Kubasaki's Kyan McCarty is considered a favorite to capture gold at 108 pounds in this week's Far East tournament at Osan. (Jack Higbee/Special to Stars and Stripes)

Defending champion St. Mary’s nearly ran the table in Japan this season, and was overtaken in the Kanto Plain finals by Kinnick, which won Far East Division I dual-meet titles in 2014 and ’15.

The Titans and Red Devils are clearly favored to meet in this week’s D-I dual-meet final and have the guns to make it a 1-2 chase in the individual freestyle portion.

But enough strong wrestlers from other schools could steal valuable points from both teams and bring them back to the rest of the field.

“That’s why you compete; you don’t know what will happen until the six minutes are over,” said longtime coach Steve Schrock of Kadena, one team that might benefit from some upsets. “It’ll come down to who makes the fewest mistakes and takes advantage of others’ mistakes.”

Prior to Far East, Stripes spokes with Schrock, Wilson, coaches Ty Gaume of defending Far East Division II champion Yokota and Ben Pak of Korea regular-season champion Seoul American about which wrestlers and teams are favored and what they have to do to prevail.

Here’s a glance at the contenders in each weight class, based on regular-season results, tournaments such as Beast of the Far East and the Kanto Plain finals and looking back at previous Far East results, among other factors. Please allow for last-second changes:

“Singhi is the one to beat,” Schrock said. “He’s tough to wrestle because he’s so long. Hopefully, Jadan can be more competitive. And I like Heino’s intensity.”

All the coaches agreed that 108 could be a tough tussle, but that McCarty has the edge. “Kyan doesn’t panic, he has good technique, he’s strong and experienced,” Schrock said.

“That’s a pretty tight group,” Wilson said of a class featuring three Far East finalists from last year. Dareing and Matsumoto are 2-2 against each other this season.

De La Rosa experienced the type of growing pains that go with jumping a couple of weight classes from 101, Schrock said. “That’s a different animal,” he said.

In another weight class with two Far East champions, most gave a slight edge to Wirth, who’s 3-1 vs. Lemkuil this season. “Wirth is meaner,” Gaume said. “Lemkuil never gives up. He keeps pressure on opponents the entire time.”

Stanley vs. Tanaka is “just another great battle,” Schrock said.

Tanaka was winning early, but Stanley has begun to show “great athleticism, plus he has good wrestling IQ,” Gaume said.

Schrock calls this class Lee’s to lose, with “everybody else in that weight class fighting for second and third,” Gaume said. “You look at him (Lee) and ask why he’s so successful. He’s just a good wrestler.”

While having lost to Lee each time, “Mason’s scored a few points on him,” Wilson said of Smith.

“A deep weight class; very tough,” Schrock said, though Osawa gets a solid edge. “He’s one of the more technical wrestlers; speed and technique,” Gaume said.

Lane’s training partner, 158-pounder Jake Dexter, “is no slough,” Gaume said. “Lane’s having to wrestle him in practice every day and he always wrestles with a chip on his shoulder.”

Though Wilson says this is Marshall’s to lose, both Schrock and Gaume feel he’s in for a battle. “That is a brutal weight class,” Gaume said, noting that Marshall had “four tough matches” en route to winning Beast.

“You can flip a coin” between Park and Krcelic, Wilson said. “Whichever kid wants it more that day, and Preston has the ability to pin some people,” Gaume said.

Rothe won as an underweight 215 last year, but will drop a weight into what many say is the toughest weight class of all. And he didn’t have the benefit of a single bout against a DODDS Korea opponent this season.

“It’s a shame he doesn’t have the opportunities to show his skill, but I can’t give him any,” Pak said. “But he’s very competitive. He’ll take the challenge. He has confidence in his ability.”

“He’s still got it; if he’s strong and hard working in practice, then he’s got a shot,” Wilson said.

Of the whole weight class itself, Gaume said: “That’s going to be a war.”

This group was diminished some when Rothe dropped a weight, but while Koslow won the key tournament titles, Sledge is to be watched for, the coaches said.

“James has worked hard and earned this,” Schrock said of the Beast winner, who pinned Domery during that tournament. “Domery’s a pretty strong athlete,” Gaume said.

Overall, “it sounds like it’ll be a fun Far East,” Schrock said.

While St. Mary’s, Seoul American, Kadena, Kubasaki and Kinnick sport full or almost-full lineup, that’s only the case in D-II with Yokota and CAJ; most others field between only four and eight wrestlers.

“CAJ and Yokota will happen,” Gaume said of a possible fait accompli in the D-II final. If it does, his Panthers should have their hands full. “They have six seniors and they’re all very good wrestlers. It’s going to be a tight battle.”