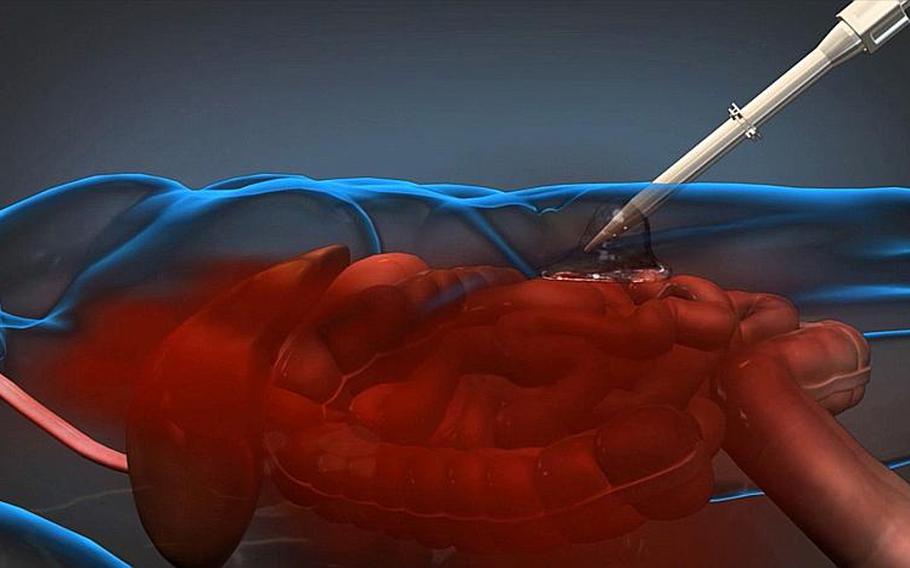 A foam-based product developed by Arsenal Medical for DARPA can be injected into a wounded servicemember on the battlefield to slow blood loss until the patient can be transported to an appropriate medical facility. (Image courtesy of DARPA)

A foam-based product developed by Arsenal Medical for DARPA can be injected into a wounded servicemember on the battlefield to slow blood loss until the patient can be transported to an appropriate medical facility. (Image courtesy of DARPA) 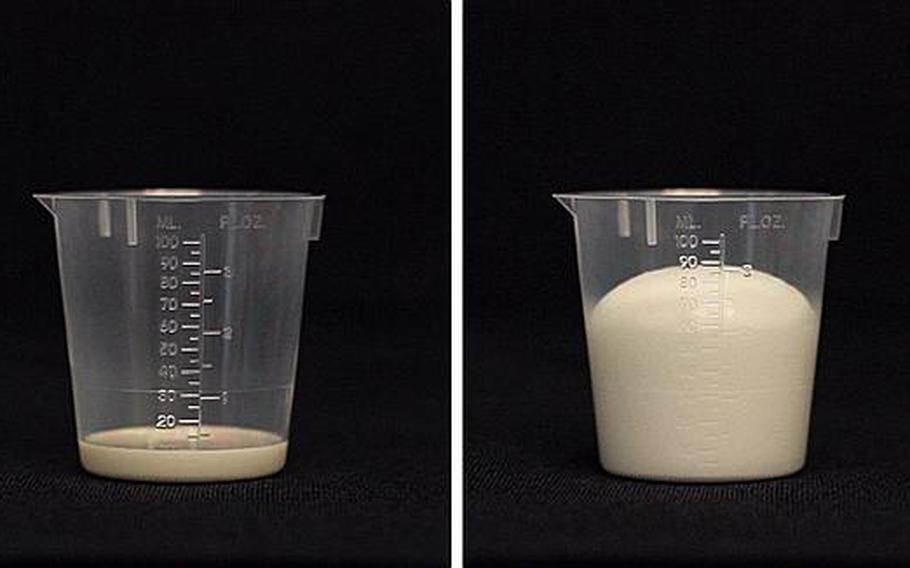 When the two components of the Arsenal Foam are mixed, they expand rapidly in the abdomen, compressing bleeding and giving patients time to get to lifesaving surgery (Courtesy Arsenal Medical)

While serving as a trauma surgeon in Iraq and Afghanistan, Army Reserve Lt. Col. David King saw countless servicemembers bleed to death internally from abdominal wounds before making it to life-saving surgery.

These wounds were almost impossible to treat in the field. Combat medics could not see where the internal injuries were or which organs were affected. Dressings, external compression and tourniquets were useless. The only real treatment was getting a servicemember to a surgeon quickly, which was not always possible.

So King linked up with Massachusetts biomaterial products company Arsenal Medical Inc. to create an injectable foam that would stop internal bleeding. The foam has reduced blood loss six-fold and increased survival at three hours post-injury from 8 percent to 72 percent in swine trials — giving hope to the military and the medical community that for the first time here is a fairly simple way to stop internal bleeding.

“If we can deliver this to the battlefield, this is a game-changer,” King said from his civilian job at Massachusetts General Hospital and Harvard Medical School. “This will enable us to return more soldiers home alive, and it could potentially be a force multiplier.”

Arsenal began developing the foam in 2010, when the company received a $7 million research grant from the Defense Advanced Research Projects Agency and its Wound Stasis System program, according to Arsenal’s foam program director Upma Sharma. DARPA made the initial connection between King and Arsenal, who then worked as a team.

The U.S. Army Institute of Surgical Research has called incompressible hemorrhaging and delays in hemorrhage control during transportation the leading cause of potentially survivable death on the battlefield, accounting for about 50 percent of all such deaths and about 20 percent of total battlefield casualties.

“These types of wounds are complicated to treat for a number of reasons, plus there is a time factor associated with this type of injury that is relatively greater than other types of injuries,” said Brian Holloway, DARPA program manager for the Wound Stasis System.

“The time for adequate response is measured in minutes for intracavitary hemorrhages. It’s not a case where you can take time to watch, observe, evaluate and then try to deal with the injury hours later. When you multiply those factors together, you end up with a very difficult problem,” he said.

The military had tried a foam-based solution and was not successful, so many were pessimistic about Arsenal’s chances for success, Sharma said. The research team needed to make sure the foam didn’t mix or move with surging blood. They were also concerned about how the foam would compress the wound and how easily it could be removed.

The team tried more than 1,200 foams, Sharma said. The one they settled on is a polyurethane polymer that is received as a single injection of two liquids in the patient’s abdominal cavity.

When the liquids mix, they turn into a solid foam and expand to 30 times the original volume while conforming to the surfaces of injured tissue, thus compressing the wound. The foam can expand through the force of an active hemorrhage as well as pooled and clotted blood.

“The specific location of the injury is generally not known, so complete, conformal contact to the irregular surfaces and structures in the abdomen is needed,” Holloway said. “The material must be easily removed, and not complicate the surgeon’s job in a hospital setting. Also, use of this device, if it’s approved, will most likely occur in austere environments; thus, the device must be small, light, and rugged so that a medic will actually carry and use it when needed.”

Equally as important as the composition of the foam was testing it in a closed cavity. King suggested using pigs because their anatomy and size of organs is similar to humans. He worked with Arsenal to develop the animal model for testing, which he says is as revolutionary as the foam.

In their model, the researchers opened up the abdominal cavity in pigs. They wrapped a wire around the liver and closed the cavity back up. They would then pull the wire to get a substantial bleed.

“No one has done a model in a closed abdomen,” King said. “Developing the animal model is almost as significant as developing the polymer itself. If someone improves upon [our polymer] in five, 10, 15, 20 years from now, this animal model will be the way testing and refinements are made to our product.”

Removal of the foam took less than one minute after a surgeon’s incision and it mostly came out in one piece. The foam does not adhere to tissues and does not absorb a significant amount of blood except on the surface.

In their testing on swine, pigs died within 30 minutes without intervention, Sharma said. With their foam, 100 percent of the pigs survived an hour, and 72 percent survived three hours.

“The military talks about the golden hour,” Sharma said. “This product should help you buy some time and get them to that care.”

The Arsenal Foam has yet to be approved for human testing. King said there have been no significant side effects or toxicity observed.

“This is very exciting; we believe this technology has the capability to save lives,” Holloway said. “Our goal is to move as fast as possible to develop and refine the device.”

Arsenal just received a $15.5 million Phase 2 contract award in December and will be entering the Food and Drug Administration application process in the next few months, King said. Then a question-and-answer period should — if all goes well — lead to limited human testing, feedback and larger-scale testing.

DARPA plans to continue the program until at least through FDA approval of a prototype.

“We’re not talking tens of years here,” until it is in use on the battlefield, Sharma said. “We see it on the horizon, which is why we’re pushing.”