Nirai Kanai, the U.S. Navy Women's Dragon Boat Team, gears up for the race in Naha, Okinawa, Friday, May 5, 2017. (Bethany Zunk/Special to Stripes)

Nirai Kanai, the U.S. Navy Women's Dragon Boat Team, gears up for the race in Naha, Okinawa, Friday, May 5, 2017. (Bethany Zunk/Special to Stripes) 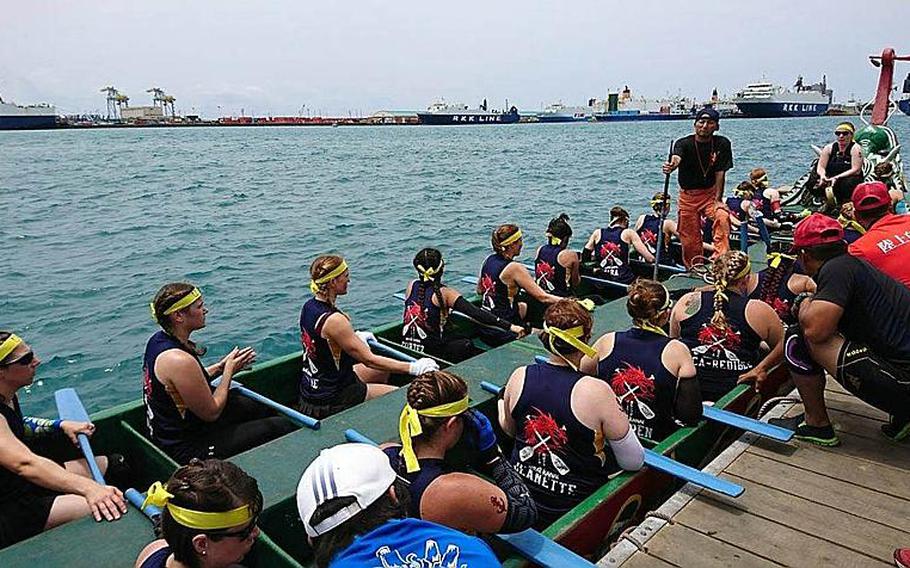 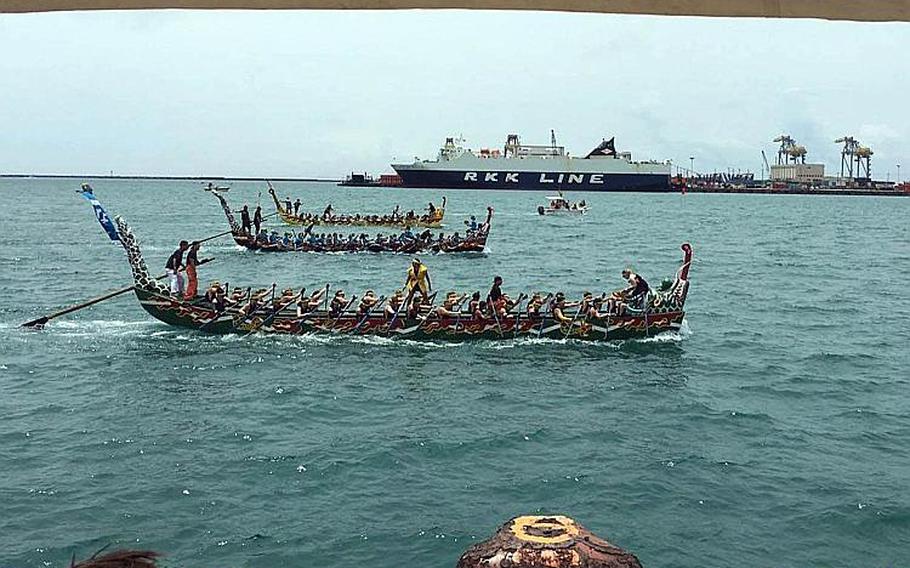 For the past 10 weeks, 35 women of all ages — military, dependents and civilians — united on Okinawa to become the 2017 U.S. Navy Women’s Dragon Boat Team.

Sweating, freezing and bleeding, we returned day after day to train despite the angry screams from our muscles. In the end, we became a united spirit known as Nirai Kanai — one of the sport’s most respected teams.

Dragon-boat racing, or hari, is a 40-year-old tradition Okinawans adapted from the Chinese. Teams control wooden boats measuring nearly 50 feet long and weighing 2.5 tons. The course is arduous, with competitors racing against time and other boats in their heat.

Races are held at the conclusion of Japan’s Golden Week holidays running May 3-6. More than 50 local and national Japanese teams, including servicemembers from the Army, Navy, Air Force and Marine Corps, show up each year to compete and display their dragon-boat spirit.

Tryouts for Nirai Kanai are grueling, and practice is even tougher. The sport is not easy. The 3 a.m. training sessions consisted of calisthenics, working our cores and building upper-body strength. Once our arms were exhausted, it was time to swim out to the dock for an hour of paddling.

Once I got a taste of the sport and a sense of who my teammates were and what they stood for, I knew I had to make the cut. Quitting was not an option. Several of my teammates felt the same way.

I feel incredibly fortunate to have been a part of Nirai Kanai. I learned so much about myself, but more so about the ladies I served with.

These women are tough. One of my teammates has five kids and still runs a weekly marathon. One has two master’s degrees, and another gave up her career in the medical field to follow her husband and raise their children. They have taught me that civilians and dependents, too, are essential to the military’s mission — that they are just as strong as their active-duty counterparts.

The team was buzzing with excitement on May 5 as we boarded a bus bound for Naha to showcase the fruits of our labors. At the port, we feasted, rejoiced and celebrated the strong unit we had become.

Anxiety took over as we lined the dock preparing to board our boat. Butterflies filled our bellies. We were thrilled; we had worked hard for this and wanted to win. We knew that ladies from past Nirai Kanai teams were cheering us on from around the globe.

We paddled to the starting line and waited for the gunshot that signaled the start of the race. Boom! Our paddles hit the water, and we took off with a velocity that was sure to scare the competition.

As we approached the turnaround buoy, our turn went wide and we lost our lead. Both the Air Force and the Army teams pulled ahead. We mustered all the force we had, but were not able to recoup our lead. Air Force took first prize with a time of 5 minutes, 45 seconds.

We did not take the trophy home that day, but that is not due to any weakness. Our strength was proven in our overall race time — our heat took the fastest times of the day at that point in the races.

We might have lost the race, but we gained something that defies definition during those long hours spent training in the dark. Asked to provide one word that described the season, my teammates said: empowering, inspiring, sisterhood, extraordinary, audacious, fierce and immersion.

Solidarity was found among a group of women who never would have met if not for this sport. We are a powerful force through our unity, and bonds made in the past 10 weeks are sure to last a lifetime.