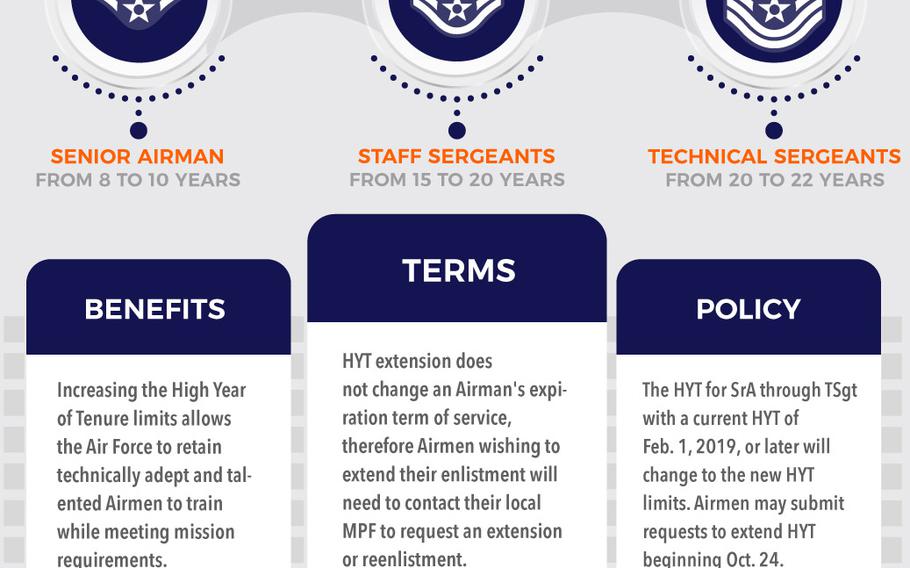 Some airmen forced out of the service by up-or-out rules might be able to return under a new policy that takes effect Feb. 1, an Air Force official said.

The service announced earlier this month changes that extend high-year tenure for senior airmen from eight to 10 years; staff sergeants from 15 to 20 years; and technical sergeants from 20 to 22 years.

But the road back to active duty for those who’ve left the Air Force requires very specific criteria, Lt. Gen. Brian Kelly, deputy chief of staff for manpower, personnel and services, told Stars and Stripes on Oct. 22.

“Once your household goods are packed up, it’s very difficult to turn the truck around and come back,” he said.

Kelly said the Air Force would try to accommodate cases where separating or retiring airmen are in the process of moving to their home of record if there is a base nearby with an opening for their grade and specialty.

“But it won’t always work out,” he said. “Again, the first step would be: Is the airmen requesting the exception through their chain of command? Is it an airman that … we want to retain, who has been exhibiting those traits of character and competence that we have? And then, is there an easy, workable solution for us to accommodate the airman, and make sure we are not expending funds in an irresponsible manner?”

Those who have been out of the service longer have to take a different route for reinstatement, according to Tech. Sgt. Angelo Barcelona, a recruiter at Yokota Air Base in western Tokyo.

Those who are no longer on active duty, or are in the National Guard or Reserve, need to contact an active-duty recruiter, he said Friday.

They will need to provide a copy of their DD-214 and a copy of their past five performance reports, and pass a medical exam, Barcelona said. Guard and Reserve airmen must also obtain a conditional release from their commander.

If members complete those requirements, their package will be reviewed at the Air Force Recruiting Service headquarters or by their career field’s manager at the Pentagon to determine if they are qualified to return, he said. Those who receive a green light will get orders and move to their assigned base.

Barcelona said some career fields move faster than others – particularly those with manning shortfalls such as as air traffic control, security forces and aerospace medicine.

“If you are prior Air Force, now is the best time to come back in,” he said. “It used to be extremely difficult to get back in, but the program has changed.”

More people apply for overseas bases than stateside bases, Barcelona said. Often spouses who leave the military miss the camaraderie and want to come back.

He added that the Air Force has opportunities for former servicemembers from the Army, Navy, Marine Corps and Coast Guard. Those who are interested should contact an active-duty Air Force recruiter.