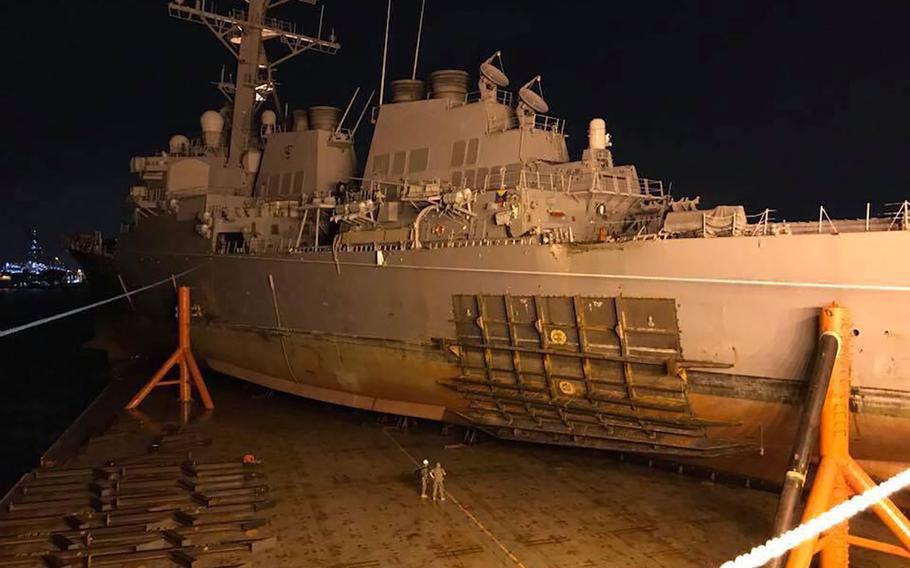 WASHINGTON — A deadly collision between the U.S. Navy destroyer USS John S. McCain and a commercial oil tanker in the Singapore Strait in August was caused by a sudden turn to port by the McCain that sent it into the path of the tanker, an investigation by the Singapore government has found.

Once that turn was made, the Alnic tanker did not take adequate steps to avoid the collision, said a report released Wednesday by the Singapore Transportation Ministry’s Transport Safety Investigation Bureau.

Ten U.S. sailors on board the McCain were killed in the collision. The Singapore investigation said that the McCain’s “sudden turn to Port was due to a series of missteps that took place after a transfer of propulsion and steering control, which led to confusion as to which station had steering control, and an unintentional reduction of the Port engine throttle.” That reduction increased the rate of the McCain’s turn, the investigation found.

It also found that the McCain crew “lacked the requisite” training or familiarity with the steering control system to properly handle the transfer of propulsion and steering control.

The Singapore findings aligned with a Navy investigation in October that revealed a loss of “situation awareness” at the McCain controls ahead of the collision. This occurred when the commander noticed that the watchstander steering the ship was “having difficulty maintaining course while also adjusting the throttles for speed control,” so he divided the duties with another sailor, ultimately leading to confusion on the bridge, the Navy report found.

Meanwhile, the Singapore report found that the Alnic’s bridge team did not respond adequately. The collision happened three minutes later. “It presumed the [McCain] would be able to safely pass ahead,” the report said. The Alnic, which had three men on the bridge at the time of the collision, did meet the five-man requirement for transit through the Singapore Strait, the report found.

The Aug. 21 crash was the second major deadly collision of a U.S. Navy ship in the Pacific last year. Two months earlier, the USS Fitzgerald and a civilian merchant ship collided near Yokosuka, Japan, killing seven sailors. Navy investigations found that the collisions were “avoidable” and caused by failures in planning, training, procedures and operations. Part of that, the Navy found, was caused by the intense operational pace the fleet has maintained in recent years.

In the wake of the collisions, the Navy instituted reforms to shore up training and alertness at sea.

The collisions also led to the removal and disciplinary punishments of several high profile Pacific fleet and ships officers. The commanders of both Navy ships were relieved of their commands and will face Article 32 hearings to determine whether they should be court-martialed.