Shulkin: 'We need a reset in the way that things work in Washington' 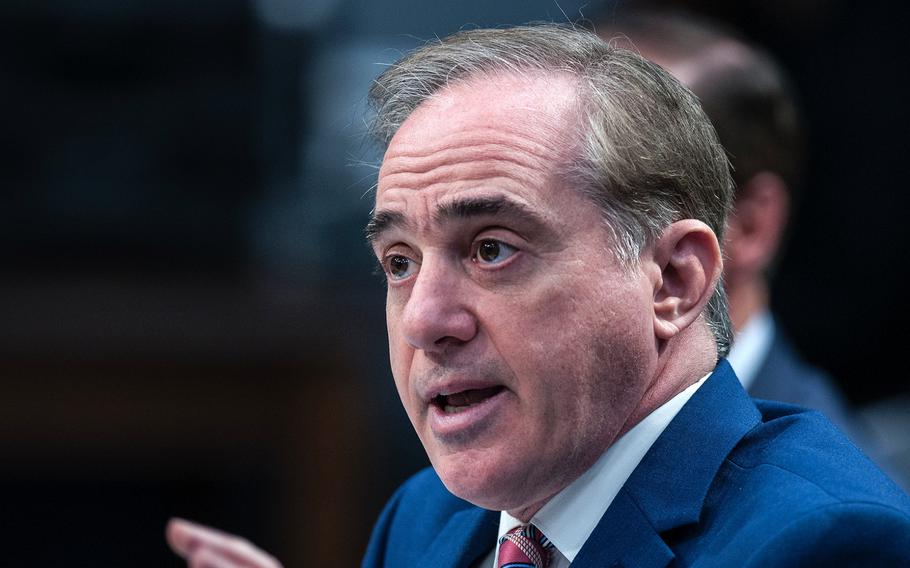 VA Secretary David Shulkin testifies during a hearing on Capitol Hill in Washington, D.C., on March 15, 2018. (Carlos Bongioanni/Stars and Stripes)

WASHINGTON — Former Department of Veterans Affairs Secretary David Shulkin released a tell-all book Tuesday about his time in President Donald Trump’s administration, detailing everything from his interview in Trump Tower to his firing-by-tweet 14 months later.

Stars and Stripes spoke with Shulkin about his book, “It Shouldn’t Be This Hard to Serve Your Country.” Part of the interview is below, with his responses lightly edited for brevity and clarity.

Question: Why did you decide to write a book about your time as secretary?

Answer: I really wanted the American public to understand why [the VA] is such an important system and why it’s important that we maintain a strong VA –- that it’s a fixable system. The second reason was that I’m increasingly concerned about peoples’ willingness to volunteer for public service, to serve their country. With this type of environment that’s out there in Washington now –- and the public attacks on people who are public servants -– I felt like we need a reset in the way that things work in Washington. I really wanted to share my story to let people understand how difficult it is now just for people to do their jobs and help the government function properly in this type of environment. In both of those cases, I felt like the story needed to be told.

Q: You mention in the book that the VA is heading toward “grave danger,” in part because of the VA Mission Act, a major expansion of veterans’ access to private doctors. Can you expound on those warnings?

A: The Mission Act is, overall, a bill that I strongly support. It’s actually, in many ways, the culmination of the work I was doing for three years at the VA, which was to make the system to access the private sector work better. But the part that really concerns me is the issue related to access standards. I had asked Congress to allow the access standards to be at the discretion of the secretary. Obviously, I was no longer secretary after the Mission Act passed, so when the new access standards did finally get published, that’s where my concern is. They continue to use what I call administrative or non-clinical rules for accessing the private sector –- they use wait times and drive times. I was a strong believer that access standards for veterans should be … based on the clinical needs of a patient, not these administrative rules.

Q: What specifically has you concerned about the access standards?

A: It opens up the system in a way that may not be clinically appropriate. If that’s the case and we start seeing a dramatic increase in the use of the private sector, that’s going to cost a lot of money. My fear would be that would come out of the resources that are currently allocated to the VA, and as a result, lead to the deterioration of the VA. I just think that might be an unintended consequence of this policy and something we really have to be vigilant about and monitor. Without looking for it, we might reach a point where the resources in the VA and the volume in the VA have deteriorated to a point of no return.

Q: You write about a group of political rivals inside the VA whom you say planned your demise because of your unwillingness to privatize the agency. Many of them have left the department since your termination. Are you still concerned about privatization efforts?

A: I don’t know anybody who’s coming out and saying they favor privatization, but you wouldn’t come out and say that, even if that was your belief. You’d simply follow a policy like [the Mission Act], continue to open up the system and ultimately watch a shift in resources. While nobody is coming about and saying that their policy is to privatize the system, we have to watch this very carefully to make sure that doesn’t happen. I think that many people have just gone underground right now and are waiting for the right opportunity to continue to push for these types of things.

Q: If you were secretary right now, what would be your most urgent priorities?

A: Nobody knows better than I do the complexity and difficulty of being secretary. There is no such thing as a single priority, there are multiple priorities in this job that require that you balance a number of those and pay attention to all of them. I think on the benefits side, the top priority has to be to resolve outstanding issues that make veterans and their families wait for answers or continue to have to fight through a legal system … that isn’t consistent with our values. I think on the health care side, the continued modernization of the VA system, which includes the electronic health record and improving the access to private-sector care. I think the focus on veteran suicide as a top priority is something that the VA has continued, and that’s a very, very good thing. I think filling staffing vacancies out there is important to do. And listening to veterans and understanding what it is they want -– that’s ultimately what this is about.

Q: In the book, you give your account of a European trip that became a national scandal during your tenure. Looking back now, would you have done anything differently in regard to the trip?

A: I think people may not realize that when the secretary has to travel, there’s very complex logistics and a team that schedules that. All aspects of it were approved ahead of time by ethics lawyers, the State Department and other federal agencies, so I don’t know how I could have avoided the issues. Do I regret that this was attention taken away from what the agency should’ve been focused on? Of course I do. Do I regret that people used this in a political sense? Of course. But one can’t look back and change things that frankly probably weren’t changeable.

Q: What do you want veterans to take away from reading your book?

A: I dedicated this book to veterans because, ultimately, they inspired me to such a great degree. When I question whether this was all worth it because of the painful experience I had toward the end of my term, I just think (about) the veterans. It was nothing but an honor to be able to improve the system and to serve them. I want to continue to be a proactive advocate on behalf of veterans and continue to see the system evolve and do well.

Q: Is there anything else you want people to know?

A: You don’t write books because you’re going to earn money. You write them because you have something that you really want people to hear. I think if we want to continue to rely on a voluntary military where people are going to raise their hands to protect the rest of us, they have to know there’s a system in place should they need it when they come back. I really see [the VA] as an integral part of our national security system. Secondly, just every day, watching the amount of people that are coming in and out of the revolving doors in the Cabinet, in the White House, and then the personal attacks that follow – it just makes me sad. I know this country is better than that, and I know how important it is that we continue to have people who are willing to spend time in making this government work better. I want to see us return to some normality in the political process.