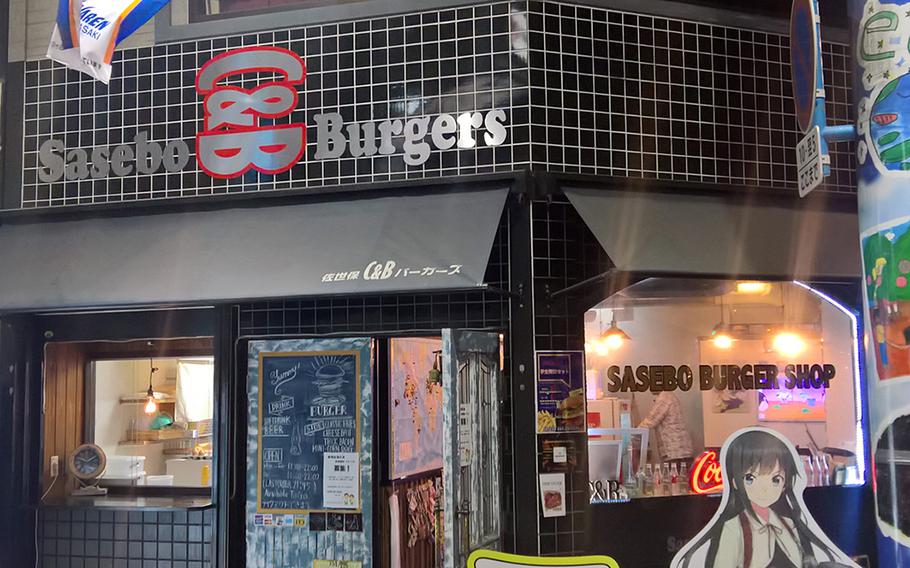 The Deluxe from Sasebo C&B Burgers is packed with bacon and stands nearly 5 inches tall. (James Bolinger/Stars and Stripes) 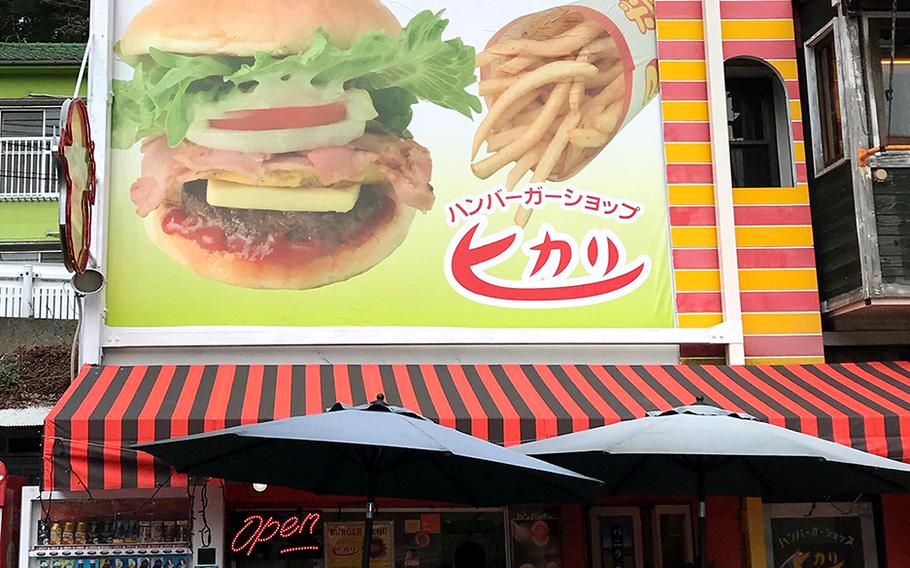 Hikari Hamburger Shop near Sasebo Naval Base, Japan, is well known for its tasty and filling Jumbo Special Burger. (James Bolinger/Stars and Stripes) Hikari is one of the oldest burger joints outside Sasebo Naval Base, Japan. For a Sasebo Burger in its purest form, try Hikari's basic cheeseburger with lettuce, tomato and mayo. (James Bolinger/Stars and Stripes)

A Sasebo Burger has all the greasy goodness of a traditional American cheeseburger mixed with a little Japanese flair.

The iconic piece of America is sold at a variety of shops outside the gates of Sasebo Naval Base, one of the smallest U.S. military installations in Japan.

U.S. sailors introduced the hamburger to Sasebo in the early 1950s during the Korean War. The small shops that popped up around the base were reportedly the first of their kind in Japan, and from those humble beginnings a legend was born that continues to draw tourists from around the country.

I tried two of these iconic burger houses for a side-by-side comparison of flavor, looks and price.

C&B Deluxe My first stop was C&B. It is one of the closest shops to Sasebo Naval Base and, frankly, it just smelled fantastic.

I handed over my business card and asked the woman at the front counter for the most popular burger on the menu — the C&B Special. She handed back a Sasebo C&B Deluxe. The Deluxe has twice the bacon of the Special, so I saw no reason to complain.

This monster burger stands nearly 5 inches tall and looks like the type of burger you’d see on an American TV commercial.

To make a C&B Deluxe, two thick strips of bacon are draped over two 100% Japan-sourced beef and pork patties, topped with cheddar cheese, a fried egg, tomato, lettuce, white onions and another slice of cheese all sandwiched in a toasted sesame seed bun.

With a side of fries and an ice-cold beer, it falls right out of Jimmy Buffett’s song “Cheeseburger in Paradise.”

According to one source, Buffett wrote the song after crossing a stretch of the Caribbean Sea in a busted sailboat. Arriving famished at the island of Tortola, in the British Virgin Islands, he and his mates stumbled across a bar serving piña coladas and cheeseburgers. The rest is musical history.

The fact it’s served outside a U.S. Navy base only adds to the C&B burger legacy.

So, the C&B burger has the looks, but does how does it stand up on flavor? The answer is, not too shabby. It has enough grease to make any stateside diner proud, but the bacon is the real star of this burger. Thick is an understatement, and it’s cooked to perfection.

The beef is juicy and flavorful, although the two quarter-pound patties are much smaller than the half-pound monsters many Americans are used to. I left full, but those with a bigger appetite might want to ask for an extra patty.

The veggies on top were fresh. The lettuce was crisp, and the tomato was one of the more flavorful I have had in Japan. The fries were standard fare — salty and hot.

Hikari cheeseburger Hikari Hamburger Shop is one of the oldest burger joints in Sasebo. It’s well known for the Jumbo Special Burger, but I wanted to try a Sasebo Burger in its purest form and opted for a basic cheeseburger with lettuce, tomato and mayo.

Of the two burgers I tried in Sasebo, the quarter-pound patty on Hakari’s cheeseburger is the best. The edges were crispy, it had a perfect amount of chew and with nothing fancy on top, the flavor of the beef really shone through.

The cheese was not a typical slice of yellow American. Instead, it was white and cut thick with a sharp flavor that complemented the beef and sweetened mayo.

Hakari’s version of the Sasebo Burger isn’t piled high with toppings and wasn’t trying too hard to be a fancy, uptown $10 restaurant burger. That is an endearing quality that any American familiar with a small-town greasy spoon diner will enjoy.

For big eaters, I would recommend a jumbo burger, which several people sitting around me ordered. The jumbo is much larger and more filling.

The french fries were nothing to write home about. They were salty and hot, but existed solely to accompany the burger.

While the burger here is tasty, the best part about Hikari Hamburger Shop is the ambiance. Everyone sits at a few tables outside or on small rock seats that also act as tables. In nice weather, the parking area is filled with motorcycle riders and families looking for a bit of local flavor.

This atmosphere, even more than the food, reminded me of home, and for that reason alone, Hikari is a restaurant I will return to, although it’s important for the weather to be nice to enable one to sit outside.

The Hikari cheeseburger is only 480 yen and you get a small soda and fries for an additional 380 yen, which means my whole meal was around $8.