The Silver Star coaster, one of the largest roller coasters in Europa Park in Rust, Germany,boasts a top speed of more than 80 mph. ()

The Silver Star coaster, one of the largest roller coasters in Europa Park in Rust, Germany,boasts a top speed of more than 80 mph. () 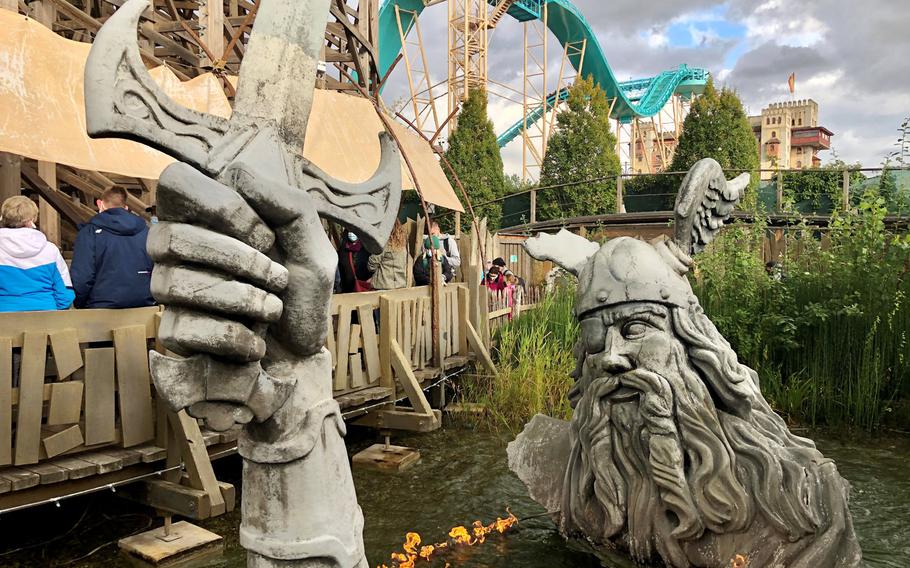 A large Norse god statue emerges from the water next to the Wodan Timbercoaster in Iceland Village at Europa Park. (Katie Ferguson) 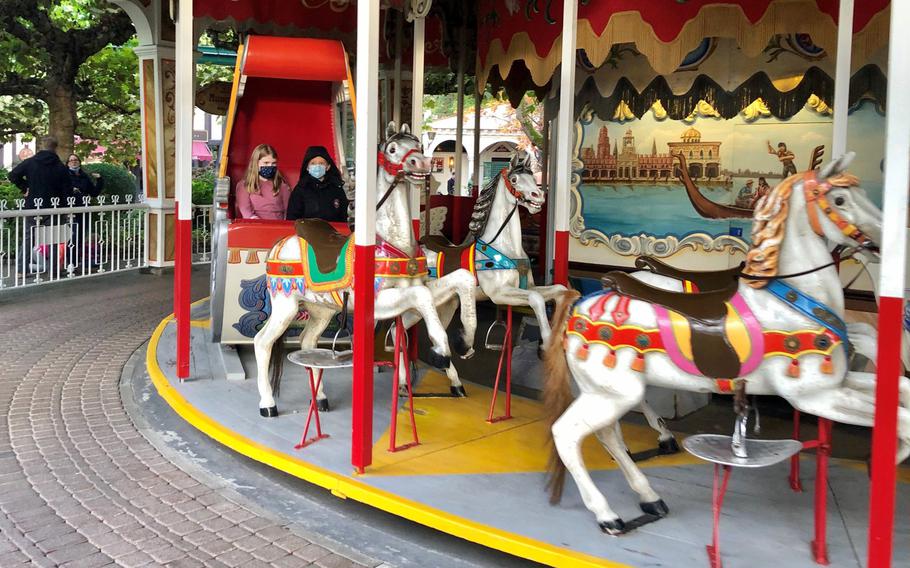 Europa Park, in Rust, Germany, looks a little like Disney World and has plenty of rides to suit most everyone. (Katie Ferguson) 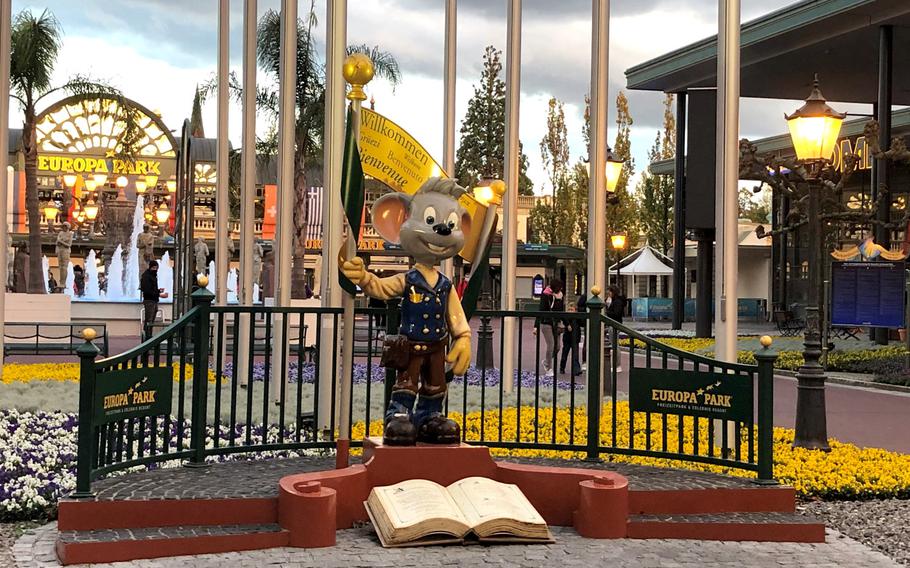 A statue of Europa Park's mascot Ed Euromaus stands at the entrance to the park. (Katie Ferguson) 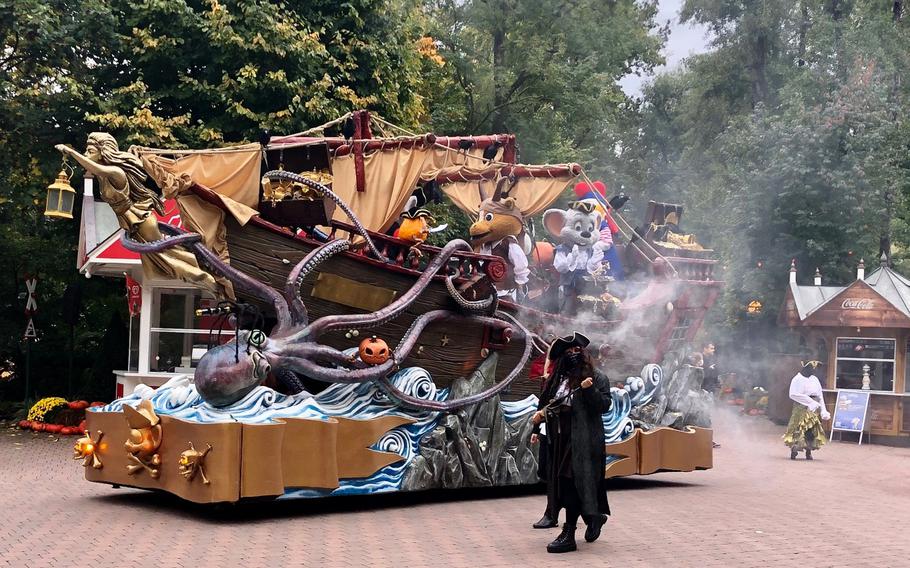 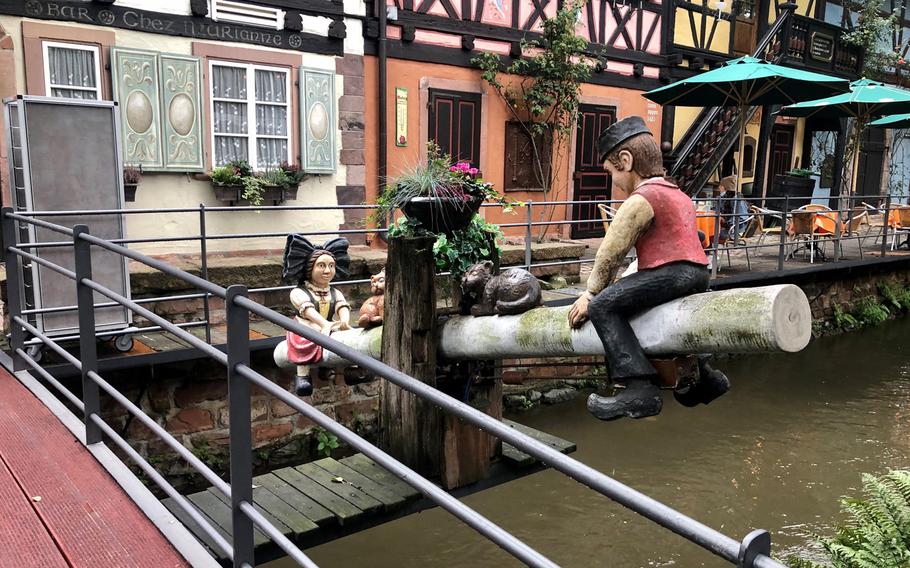 A see-saw fountain sits outside one of the many restaurants in Europa Park in Rust Germany. (Katie Ferguson)

As the coronavirus resurges in Europe, the last thing many families are thinking about is a theme park vacation.

But this might be a good time to visit Europa Park in Germany.

The park is in Rust, a small town in southwestern Germany, about 2 ½ hours away from Kaiserslautern, between Freiburg im Breisgau and Strasbourg. It’s Germany’s largest theme park and is where I took my family for an early fall vacation.

We reserved a local apartment in the city rather than a hotel, as we didn’t want to be cramped.

Due to coronavirus restrictions, the park is limiting the number of tickets sold per day, and they are only available online.

Like any of the Disney theme parks, there are rides to suit almost everyone. The park wasn’t that crowded when we visited, and I don’t think we waited more than 30 minutes in line for a ride. In one day, we rode almost every roller coaster there.

The park is separated into 15 European-themed areas — like England, Italy, France and Iceland — with each section decorated to suit the country. When we went in October, there was also an American theme running through the park: Halloween decorations were everywhere.

The park has an app to guide you on your adventure. It also shows the wait times for each ride and the height and age requirements.

The Silver Star coaster, one of the largest in the park, boasts a top speed of more than 80 mph and was my favorite, but my wife thought the Wodan Timbercoaster was the best one there.

The park has plenty of rides for younger guests, too, and for parents who want to ride the big-kid rides but can’t take their little kids, there’s a “baby switch” pass that allows both grown-ups to ride without waiting in line each time. If your child is too small to go on the ride, you get a baby switch pass and enjoy the ride while the other parent waits with the kids, and when your ride is over, the parent who didn’t get to ride goes in through the exit and presents the pass without having to wait in line.

Masks and distancing are required in lines and on rides, and the park has hand-washing and sanitizing stations throughout. We saw some rides being cleaned between riders.

Other things that make the park a great place to visit include that dogs are allowed and there are plenty of places that offer reasonably priced food.

The park is large, so bring comfortable shoes. We walked more than seven miles, but we were having so much fun that I didn’t even notice.

ACCOMMODATION: Plenty to choose from in the area. Online: europapark.de/en/all-hotels-camp-prices, Booking.com or airbnb.com/germany/stays