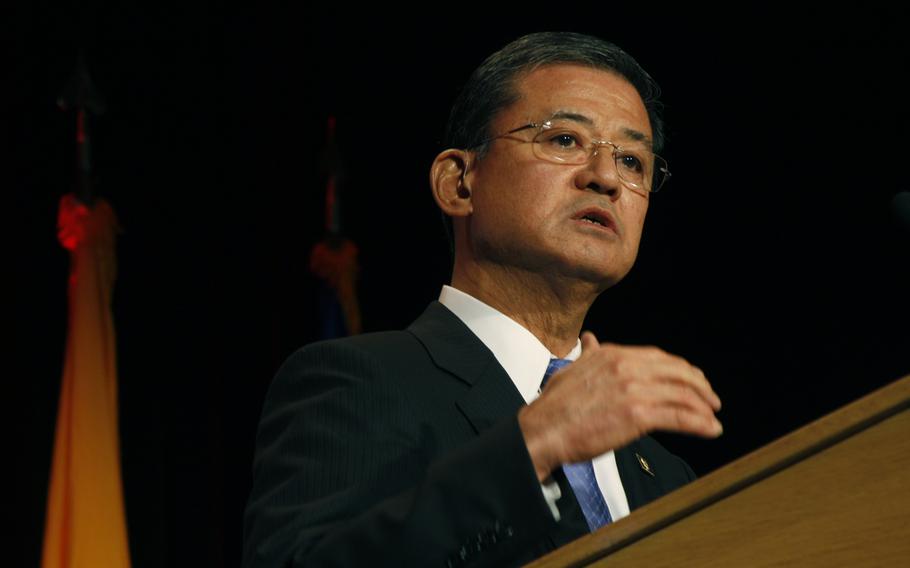 WASHINGTON — Veterans Affairs Secretary Eric Shinseki called the veterans claims backlog “the reason I agreed to continue my service as secretary” and promised that the department is on track to fix the problem in the next two years.

In remarks to the Veterans of Foreign Wars annual conference in Kentucky on Tuesday, Shinseki acknowledged that “we are behind where we predicted and where we wanted to be” on the processing those claims, but also promised “that will shift downwards quickly.”

VA officials have promised to end the benefits backlog -- the number of claims pending for more than four months -- over the next two years.

Since March, the number of backlogged claims has dropped more than 15 percent, but more than 515,000 claims are still backlogged in the VA system. That figure hasn’t dropped below 500,000 in the last 18 months.

Last year, in his speech before the VFW’s annual meeting, Shinseki vowed that the share of backlogged claims in the system would be no higher than 40 percent when he returned this year. Instead, it sits at 65 percent, the same level as a year ago.

But Shinseki insisted that the department is on the right path, thanks to new processing procedures and software that officials have put in place over the last two years.

He said he understood frustration at the pace of change, but added that the department has been focused on finding solutions to the claims processing delays and the mental health needs of returning combat veterans.

“Some have criticized VA as being uncaring and unhelpful on both issues,” he told the crowd. “Neither is correct.”

Last month, Shinseki became the longest serving VA secretary in U.S. history, and the longest serving veterans administrator since the end of the Vietnam War. Many veterans insiders had expected him to step away from the post last fall, after President Barack Obama’s re-election, because of the short tenure of most cabinet officials.

He told the veterans in attendance that the knowledge that his time in office may be short has spurred him to move quickly on a host of initiatives.

In the last four years, he noted, the department has added $40 billion in funding, enrolled 940,000 new veterans to programs, opened 66 community-based clinics and a new medical center in Las Vegas, and administered education benefits for more than 1 million veterans and dependents.

He praised the department and the veterans service organizations for “staying clearly sighted on what’s best for veterans” and vowed that VA officials are committed to improving all aspects of their operations.

But the department’s top headache -- the claims backlog -- looks to be the driving force for his remaining tenure as secretary.

“We’ve said all along it would take time to solve this correctly,” he said. “And we are not going to leave this for another secretary and president to wrestle with.

“We are on track to eliminate the backlog in 2015. We started out four years ago with a plan, and we’ve stayed with it.”