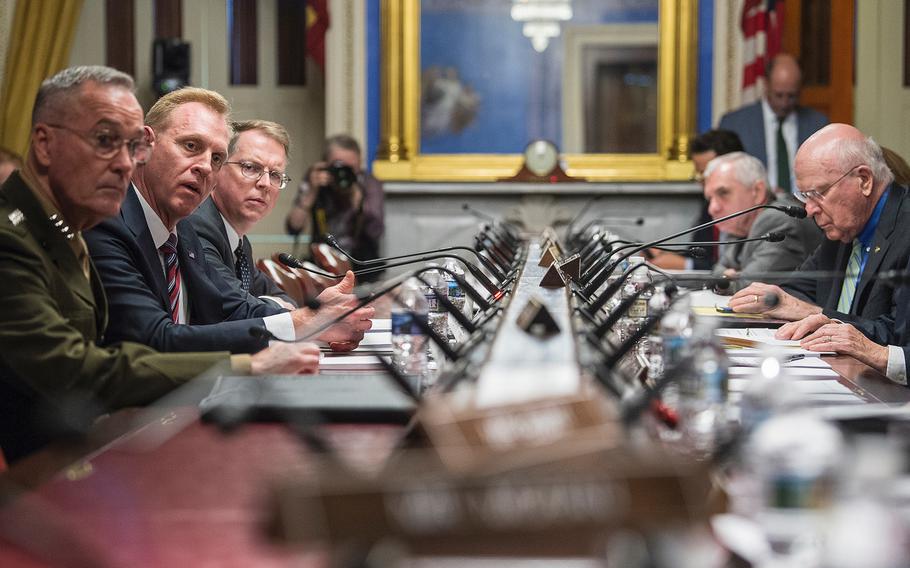 WASHINGTON – The Pentagon’s two top officials on Wednesday defended a decision to dispatch the USS Abraham Lincoln and a bomber task force to the Persian Gulf over the weekend to counter Iranian threats to U.S. forces in the region.

“We saw the intelligence and so we sent some messages on Friday to make sure that it was clear to Iran that we recognize the threat and we were postured to respond to the threat,” Dunford, who was making his 26th appearance on the Hill, said in response to senators’ questions. “What I asked really was to accelerate the movement of the Lincoln and the bomber task force so that there would be no ambiguity about our preparedness to respond to any threat against our people or our partners in the region.”

Dunford told the Senate Appropriations Committee subpanel on defense issues that the focus was to deter, and on Sunday, he asked Shanahan to accelerate pre-existing plans to move the aircraft carrier to the Gulf.

The comments marked one of the more contentious points of a crammed Senate hearing in the Capitol building, as Sen. Jack Reed, D-R.I., grilled the military leaders on the maneuvers against Iran.

Reed, who is also the longtime ranking Democrat for Senate Armed Services Committee, admonished Shanahan and Dunford for not alerting members of Congress sooner about the plans.

“It took the [Defense Department] more than two days to share any information with the congressional defense committees and I sit on both and frankly I think that’s unacceptable,” Reed said. “If there is a serious situation requiring response of this nature, we should be informed. So why were we not informed in a detailed and timely manner?”

Shanahan, who has testified on the Capitol Hill five times so far in 2019, agreed and he said military officials could have informed lawmakers Monday or Tuesday. He noted Reed would learn more at a private meeting with Dunford later Wednesday.

“On Friday afternoon, we went to work understanding the sources and to get the teams turning on what does it mean and how might we respond,” he said.

As Pentagon officials juggled new details that North Korea had resumed its testing of missiles, they continued to go through Iran intelligence, working in coordination with Marine Gen. Kenneth McKenzie, commander of U.S. Central Command.

McKenzie, in a speech Wednesday at Washington-based Foundation for Defense of Democracies think tank, described the Iran intelligence as “troubling and escalatory indicators and warnings” of potential attacks.

“It was really Sunday afternoon that you came back and said here’s what we are recommending, I need authority to proceed,” Shanahan said, signaling Dunford.

Following coordination with the State Department and others, “it was really Sunday night before any real information was put together.”

The comments were the first on the Capitol Hill since the weekend’s dramatic face off with Iran.

In McKenzie’s speech – his first public speaking engagement since taking CENTCOM’s reins March 29 -- he issued a strong rebuke of the Iranian regime, citing it as the worst driver of instability throughout the Middle East. He warned the expedited deployment of the Lincoln and the bombers was singularly aimed at Iranian actions.

Nonetheless, McKenzie stressed the United States does not want a war with Iran.

"Make no mistake. We're not seeking a fight with the Iranian regime,” he said. “But … Iran should not confuse our deliberate approach with an unwillingness to act."