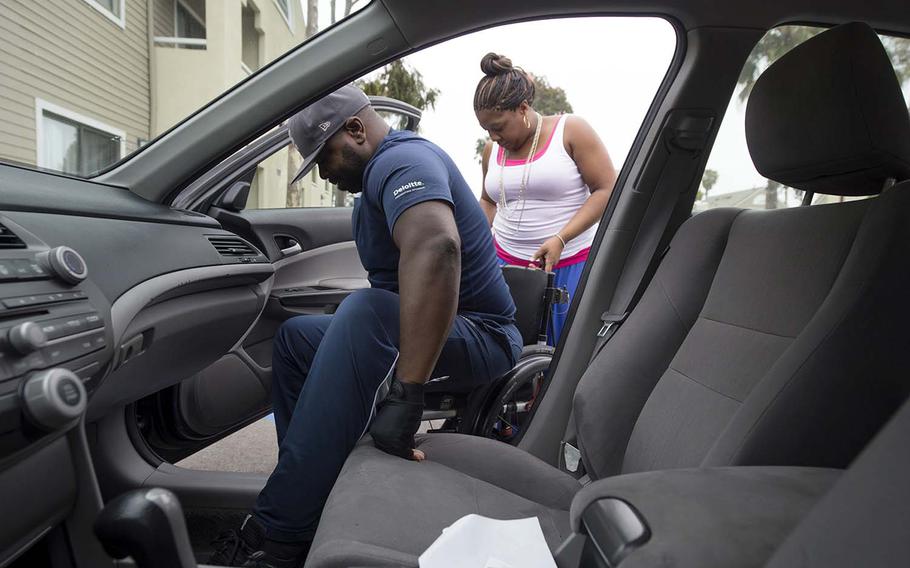 Shundra Johnson holds a wheelchair for her husband Coast Guard Lt. Sancho Johnson as he gets into a car while traveling to the Navy's wounded warrior training camp for the 2015 DoD Warrior Games, May 29, 2015. Shundra is also her husband's caregiver. (EJ Hersom/Department of Defense)

A showpiece of the Veterans First package that the Senate Veterans’ Affairs Committee unveiled last week is a multibillion-dollar initiative to phase in for older generations of severely injured veterans robust caregiver benefits first enacted in 2010 only for the post-9/11 generation.

Though it’s only part of a huge omnibus bill containing many veteran reform measures that senators previously introduced as separate bills, the plan to expand caregiver benefit coverage carries the biggest price tag. The early estimate is $3.1 billion over its first five years.

For in-home caregivers of thousands of vets with severe physical or mental injuries, it would mean cash stipends for their time and effort, health insurance if caregivers have none, guaranteed periods of paid respite to avoid caregiver burnout and training to enhance patient safety.

Sen. Patty Murray, D-Wash., prime architect of the caregiver expansion plan, negotiated with Sen. Johnny Isakson, R-Ga., the committee chairman, to secure a modified plan that could be funded with budget offsets and gain bipartisan support on the committee. That should improve its chances of becoming law despite still formidable obstacles ahead.

Perhaps the biggest is lingering disappointment over how the current caregiver program operates. Though it is delivering benefits to spouses and parents caring for 31,000 severely disabled veterans of the post-9/11 era, the program remains underfunded, understaffed and lacking modern software to screen applications, track care needs or verify levels of caregiver support and program managers’ responsiveness.

The Government Accountability Office found many problems, including too few Caregiver Support Coordinators who run the program locally. The program remains so “badly mismanaged” as to leave the House Veterans’ Affairs Committee, chaired by Rep. Jeff Miller, R-Fla., doubtful that the Department of Veterans Affairs can handle a vast expansion of eligibility, a committee staff member said.

“While the intent of the Senate bill is admirable,” the staffer said, “we have an obligation not to expand existing programs without first ensuring they function correctly.”

But Isakson agreed with Murray that, rather than allow weaknesses in the current program to block expansion to older veterans, they should phase in eligibility for older generations on a schedule that gives VA time to fix problems while it incentivizes Congress to provide needed funding.

VA promises to have a modern IT system in place for the program by December this year. The Senate package would require the VA secretary within a year to certify that problems GAO identified have been fixed. Then within another year VA would begin to accept benefit applications from caregivers of veterans who served during the Vietnam War or earlier. Two years later, VA would start to accept applications from caregivers of severely injured veterans who served in the period between Vietnam and 9/11.

The pool of pre-9/11-era caregivers likely to be eligible for benefits if the program is expanded could be as high as 80,000, VA reported last year.

With up to 400 new caregivers of post-9/11 veterans qualifying for benefits every month, program costs are climbing steadily, from $453 million in 2015 to $650 million this year; $725 million is sought for next year.

There are problems with the program, but the VA alone isn’t to blame, said Adrian Atizado, deputy legislative director for Disabled American Veterans, whose national service officers field caregiver complaints. Congress underfunded it. Meanwhile, DAV and other advocates were slow to sound alarms over the underfunding, poor staffing and the sketchy information about the program that VA has given caregiver applicants and injured vets.

“I totally disagree with the House’s interpretation that it should not be expanded because of how the program is running now,” said Atizado. “I do share their concern about completely opening it up immediately.” But the Isakson-Murray phased expansion, he said, is a “reasonable compromise.”

In a statement, Miller said the omnibus deal reached by the Senate committee is a positive development. If it clears the Senate, “I look forward to immediately engaging in conference committee negotiations in order to move a VA reform package to the president’s desk,” Miller said.

Rather than compile one massive piece of legislation as the Senate committee opted to do, the House committee shepherded 21 separate bills on veterans’ issues through the House, which now await Senate action.

Besides differences in approaches, there are differences in priorities. The House committee said the most pressing VA need is tougher accountability rules so executives who put their own interests ahead of veterans can swiftly be reprimanded or fired. Miller and staff view their House-passed accountability bill, HR 1994, as much stronger than provisions embraced by Isakson and Sen. Richard Blumenthal of Connecticut, the committee’s ranking Democrat, at their Veterans First press conference.

Though the House sought no expansion to the caregiver program, staff noted that all of its House-passed veteran bills are fully paid for with spending offsets verified by the Congressional Budget Office.

Isakson said he and colleagues also found offsets to pay for the Veterans First package, estimated to cost $4 billion over 10 years, without cutting prized veteran benefits. The offsets no longer embrace a controversial idea to cut by half the monthly housing stipend for family members who use transferred post-9/11 GI Bill benefits.

Murray said she doesn’t know if Miller and his House colleagues will support the caregiver expansion when they conference on veteran issues.

“I do know that this program is about putting veterans’ needs first and supporting the men and women who put their own lives on hold to take care of veterans,” Murray said. “Taking care of our veterans should never be a partisan issue.”