Senators urge VA not to fumble expansion of caregiver benefits 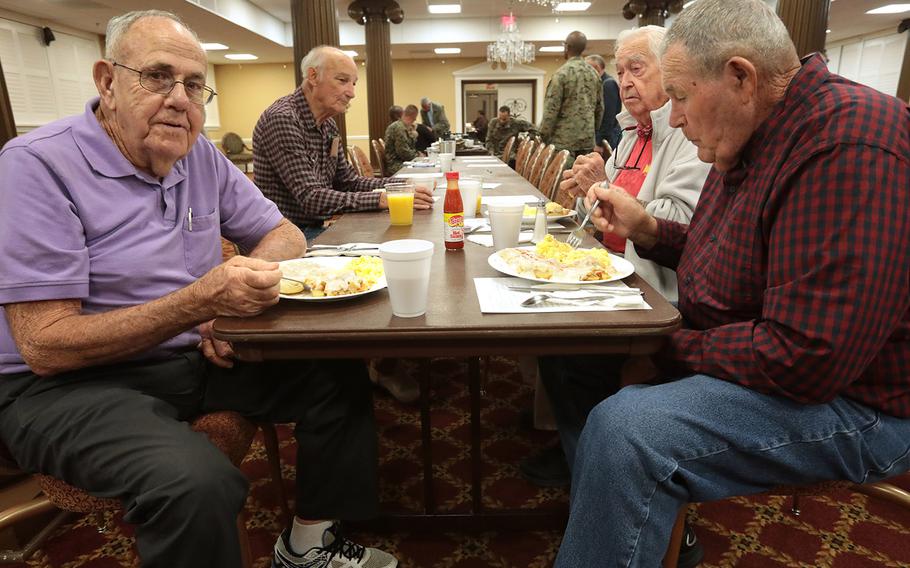 A Coast Guard veteran encouraged several of his military peers to take advantage of the many programs offered by Veterans Administration during the monthly veterans breakfast at Marine Corps Logistics Base Albany, Nov. 7, 2018. Capt. Frank Cole shared information on new programs like the MISSION Act and changes to caregiver services. (Re-Essa Buckels/U.S. Marine Corps)

Sen. Patty Murray, D-Wash., says she is grateful to Department of Veterans Affairs Secretary Robert Wilkie on behalf of thousands of caregivers of veterans who suffered severe physical or mental injuries while in service since the terrorist attacks of 9/11.

At Murray’s request, Wilkie last December ordered suspension of further downgrades or stoppage of caregiver benefits to current recipients until VA can attest that its health care facilities nationwide are running and resourcing the caregiver program consistently and as Congress intended.

On the other hand, Murray says, she and Democratic colleagues in the Senate are alarmed by other VA actions related to expansion of the Program of Comprehensive Assistance for Family Caregivers (PCAFC) to older generations of severely injured veterans as Congress directed under last year’s VA Mission Act.

“VA continues to miss deadlines and not get it right,” Murray said in a phone interview Wednesday. “And we have got to make them step up to the plate and make this work.”

In a Feb. 28 letter to Wilkie, Murray and nine other Senate Democrats, including ranking members on the Veterans’ Affairs and Armed Services committees, contend VA already is months behind in needed upgrades to information technology to begin to extend caregiver benefits to qualified veterans of the Vietnam and Korean War eras by Oct. 1, 2019, as Congress directed.

The letter also charges VA officials with a lack of transparency as they draft regulations to implement caregiver expansion, and criticizes some steps VA has said it wants to take to hold down future program costs, for example, by tightening access to caregiver benefits and changing methods for calculating caregiver stipends. The letter warns Wilkie that VA lacks authority to make some of the changes eyed without getting Congress to make changes in law.

A VA handout says more than 38,000 caregivers have been aided by the program since it was established in 2011. The annual cost exceeds $900 million and will rise sharply as the program expands to benefit family caregivers of surviving veterans who received severe line-of-duty injuries since World War II.

VA says it wants to make eligibility determinations more transparent and consistent. As the Mission Act requires, eligibility will be based on a veteran requiring assistance with at least one activity of daily living, or needing supervision or protection to remain in their community. But to ensure consistency, VA has signaled it will require a more rigid definition of serious injury and an explicit need for daily assistance with more monitoring visits and an annual reassessment.

“At this point they have not responded to any of our inquiries,” said Murray in our interview. “They are not answering our questions. They are not telling us what they have in mind. So, we are doing everything we can to make this visible so they, if we have to, are embarrassed into it.”

In 2011, as then-new chairman of the Senate Veterans’ Affairs Committee, Murray lambasted the Obama administration over its draft rules to implement that benefit, criticizing missed deadlines and restrictive language to limit access.

As caregivers and severely injured veterans of past war eras criticized the inequity of extending benefits only to the post-9/11 generation, Murray led a bipartisan fight to expand eligibility. With help of colleagues, she finally got it done under a phased schedule as part of the 2018 VA Mission Act.

Caregiver benefits includes a caregiver stipend, access to health care insurance, training and stress counseling and a period of paid respite away from caregiver responsibilities. Eligibility is to be phased in for people caring for veterans catastrophically injured in past conflicts back to World War II. Expansion of benefits to veterans who received severe line-of-duty injuries after May 7, 1975, and before 9/11 would begin two years after earlier generations become eligible.

While expansion is expected to add hundreds of millions of dollars to VA budgets, Murray and other advocates contend the program also saves federal dollars because families avoid having to institutionalize veterans to get proper care.

VA officials have contended they can’t expand caregiver benefits without a significant upgrade in information technology. Congress funded that effort but VA missed an Oct. 1 deadline last year to declare the new IT system operational.

“We told them: Get it done,” said Murray. “Behind their walls I don’t know what they’re doing to get it done. It’s not done yet. And it needs to get fixed.”

For the past two years, Murray and staff contend, VA aggressively downgraded caregiver benefits or discharged veterans from the program. It was deemed a particular problem for veterans severely disabled from post-traumatic stress or traumatic brain injury as VA health care providers judged them capable of performing activities of daily living without aid of a caregiver.

To a rising clamor from families and from Murray, Wilkie agreed to impose a second VA moratorium on caregiver benefit downgrades and program discharges. Murray said she is worried they can begin again whenever Wilkie declares past inconsistencies in management and oversight to have been found and fixed.

She wants VA to explain to Congress why so many families felt the program had been unevenly operated and under resourced. That’s especially important with expansion planned for older generations of severely injured vets, Murray said.

“Before restarting appropriate discharges and downgrades,” senators told Wilkie in their recent letter, “we ask that you require training, leadership, and oversight improvements, and that you request an independent evaluation of the efficacy of those steps by the Office of Inspector General.”

In the Mission Act, they added, “we structured a responsible, phased in approach to the expansion to allow VA to strengthen the program. VA cannot continue to squander this time. The program must be ready and meet the statutory deadlines, because veterans are urgently in need of this support.”

The senators noted that expansion to severely injured veterans of Vietnam and earlier wars can’t begin until VA has a new IT system operating. The Oct. 1, 2018, deadline for that “has come and gone, and it is not clear if or how VA will ensure the certification deadline of the system, October 1, 2019, is met.”

The letter reminds Wilkie that government auditors first recommended that VA fix its caregiver IT system in September 2014, and VA “has repeatedly assured us it is working on this issue. We urge you to immediately expedite these efforts, including by examining whether commercial-off-the-shelf solutions can rapidly and effectively meet the Department’s needs.”

The letter further notes that for the past two years the Trump administration in its VA budget requests has shorted the caregiver program by several hundred million dollars, forcing Congress to add funds so all eligible post-9/11 caregivers continue to get promised benefits. It urges Wilkie not to short the program again.

“The Department must also ensure sufficient staff are in place to handle the high workload and to prepare for the program’s expansion,” the letter continues. “Caregiver Support Coordinators are already overwhelmed as are the administrative staff essential to running the program.”

VA had no immediate reaction to charges made in the letter, which also demanded that the department provide Congress with the most recent data and statistics available to give a fuller picture of how the caregiver program operates.