Senators say war fund, Pentagon cuts could save A-10 A member of the 354th Expeditionary Fighter Squadron performs an post flight inspection on an A-10 Thunderbolt II attack aircraft May 1, 2015, at Ämari Air Base, Estonia. (Rusty Frank/U.S. Air Force)

A member of the 354th Expeditionary Fighter Squadron performs an post flight inspection on an A-10 Thunderbolt II attack aircraft May 1, 2015, at Ämari Air Base, Estonia. (Rusty Frank/U.S. Air Force) 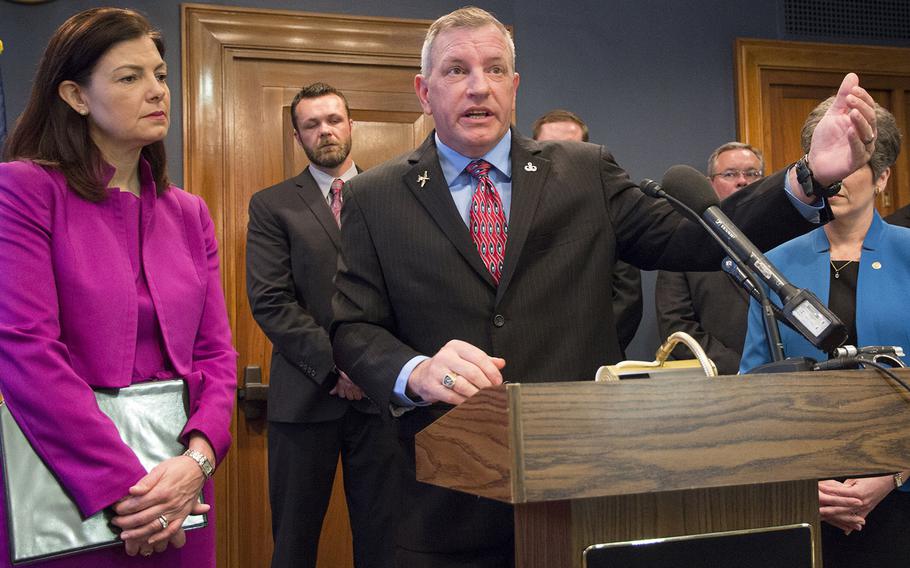 Retired Master Sgt. Tim Stamey makes a point in defense of the A-10 Warthog aircraft during a Capitol Hill press conference, May 5, 2015. At left is Sen. Kelly Ayotte, R-N.H., left, and in the background at left is Charlie Keebaugh, president of the Tactical Air Control Party Association. ()

WASHINGTON — Congress could tap an overseas war fund or cut the budget of the secretary of defense’s office to save the A-10 Thunderbolt from retirement, Senate lawmakers said Tuesday.

A group of A-10 supporters, including Sen. John McCain, R-Ariz., said money can be made available for the program and urged fellow senators to support protections for the aircraft as they draw up the annual defense budget this week.

The push in the Senate comes after the House approved an early version of its budget that bars the Air Force from continuing with its controversial plan to retire the downrange stalwart, known as the Warthog, which the service says would save about $4.2 billion by 2019.

“We have found more money in this OCO [Overseas Contingency Operations] increase in funding, which can be used for a variety of purposes. So, there is more money,” McCain said.

The OCO fund was created as a special pot of money to quickly and efficiently fund emergency war needs in Iraq and Afghanistan but has since morphed into an extension of the base budget.

This year Congress is proposing a large boost in OCO to fund daily military operations and sidestep budget caps designed to reduce the national debt.

Sen. Kelly Ayotte, R-N.H., whose husband is an A-10 pilot, said funding for the aircraft could also come from trimming the “bloated” bureaucracy within the Pentagon, particularly the Office of the Secretary of Defense.

She said Defense Secretary Ash Carter has acknowledged that such cuts are needed.

“We can’t continue growing the bureaucracy and cutting the tip of the spear,” Ayotte said.

McCain, Ayotte and other supporters have fought the Air Force’s proposed retirement for the past year, saying that the A-10 saves American lives on the battlefield and cannot be replaced by any other aircraft including the high-tech F-35 Lightning II, which is under development.

Many troops have agreed with the assessment.

Charlie Keebaugh, president of the Tactical Air Control Party Association, appeared with the senators on Capitol Hill on Tuesday and said the servicemembers who work directly with the aircraft and see its benefits are losing faith that leaders in Washington pushing for the retirement have their best interests in mind. The association represents about 3,300 tactical air controllers.

“The A-10 cannot be replaced with any other asset,” he said. “It actually disgusts me that we are having this conversation in the first place.”

The Air Force has been shrinking and under intense budget pressure since a round of budget caps in 2013 called sequestration. Leadership has testified to Congress about the A-10 repeatedly and said the 1970’s-era aircraft will be retired to invest in new airframes with more advanced capabilities.

The F-35 will be deployed to the Marine Corps this summer and rolled out by the Air Force later in the year. But the first version of the fifth-generation fighter jet will not be able to match the Warthog’s fire power, according to recent Pentagon testimony.

Sen. Lindsey Graham, R-S.C., who serves in the Air Force, said the service’s claims that the A-10 can be replaced do not bear out and he warned about misleading lawmakers.

“If you don’t watch it, you are going to ruin what’s left of your reputation on Capitol Hill,” Graham said. “If the answer to retiring the A-10 is money, then let’s find the money to keep it flying.”