Senate may require Pentagon to study permanent US presence in Poland 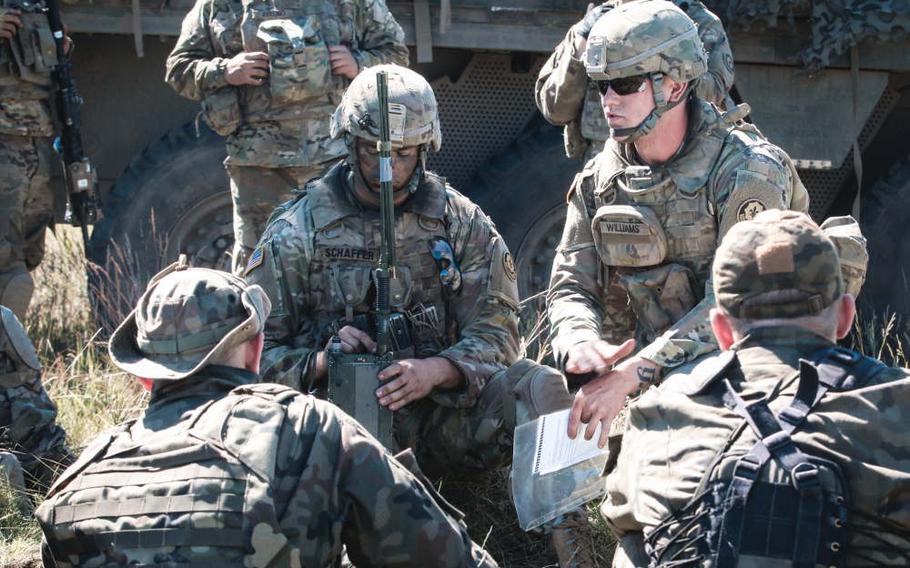 Army Pvt. Jacob Williams, right, with the 1st Squadron, 2nd Cavalry Regiment, teaches Polish soldiers how to use a Single Channel Ground and Airborne Radio System during the Saber Strike exercise at Wyreby, Poland, on June 7, 2018. The U.S. Senate approved a measure last week that would call on the Pentagon to consider the feasibility of permanently deploying U.S. troops to Poland to counter Russian aggression. (Hubert Delany/U.S. Army)

The Defense Department could soon be assessing the feasibility of permanently deploying U.S. troops to Poland to counter Russian aggression.

The U.S. Senate last week approved a measure to require the Pentagon to study the need for such a deployment and the political ramifications of it.

The language was adopted Thursday by voice vote and added to the Senate’s version of the fiscal 2019 defense policy bill, which the Senate was expected on Monday to vote on.

Sen. John Boozman, R-Ark., sponsored the amendment. It calls for the Pentagon to submit the report to congressional defense committees by March 1, 2019.

Specifically, the Pentagon is to examine whether a permanently assigned Army brigade combat team would be effective and how Russia might react to such a move.

A brigade typically consists of three to five battalions with about 1,500 to 4,000 soldiers.

Poland currently hosts U.S. Army and NATO forces, who rotate between Poland and the three Baltic states of Latvia, Lithuania and Estonia. The Air Force also maintains an aviation detachment year-round in Poland, comprised of a small group of airmen deployed months at a time to facilitate U.S. and NATO staging in the country.

But Poland is vying to bolster the U.S. presence even more to counter the threat it perceives from Russia, which in 2014 seized the Crimean Peninsula from Ukraine, Poland’s eastern neighbor.

Poland is willing to pay for some of that support.

The Polish Defense Ministry earlier this year said in a proposal that it would provide as much as $2 billion to support the deployment of a permanent U.S. armored division in Poland.

In the proposal, first reported on by the Polish news service Onet, the ministry refers to “aggressive Russian actions” in 2008 in Georgia and from 2014 on in Ukraine.

“Russia is seeking to strengthen its political and economic relations with key European countries at the expense of U.S. national interests,” the proposal says. “An increased U.S. permanent presence in Poland will give America the strategic flexibility it needs to confront and deter these threats” while helping to secure “American interests its shares with” European partners.

Russia in recent years has also steadily boosted its military capabilities in its enclave of Kalingrad, which borders Poland. A nuclear watchdog group reported Monday that the Russian military has renovated an underground bunker 50 miles from Poland that could be an active nuclear weapons storage site.

The Senate amendment says the Pentagon should assess the willingness and ability of Poland to provide host nation support for a brigade combat team and potential locations for such a team.

The amendment doesn’t ask the Pentagon to examine which units in the States might help fill the team, but it does ask planners to consider whether future growth in Army “end strength may be used to source additional forces” in Poland.

The report is expected to be unclassified, though the Pentagon may include a classified portion, according to the amendment.