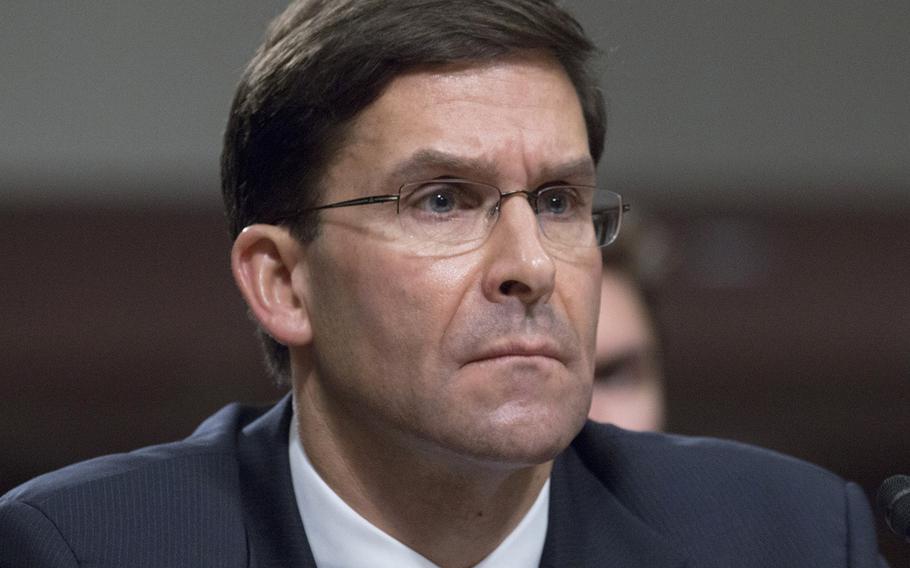 WASHINGTON — The Senate on Wednesday approved former Raytheon lobbyist Mark Esper as Army Secretary, marking the end of the Trump administration’s push to fill one of its more challenging vacancies.

President Donald Trump’s first two picks for Army Secretary failed. Esper’s nomination was held up during a three-month battle for information among defense hawks on Capitol Hill, the Pentagon and the administration.

During Esper’s Nov. 2 confirmation before the Senate Armed Services Committee, Chairman Sen. John McCain, R-Ariz., said the candidate’s industry background had given him pause and fueled delays of his testimony. Esper will be the last industry executive to advance as a Pentagon nominee, he warned.

“I would be remiss if I did not reiterate my concerns about the number of nominees from defense industry filling out the leadership ranks at the Department of Defense,” McCain told Esper during his hearing. “My reservations grew out of early consultations I had with the [Trump] administration about potential nominees, including yours and a handful of others. It was then that I decided I couldn’t support further nominees with that background.”

Esper has committed to recusing himself from Raytheon-related matters and submitted a letter to that effect, McCain said. Esper reportedly drew annual compensation of $1.5 million from his recent work for Raytheon Co., one of the country’s largest defense contractors.

Esper’s approval fills the final top civilian spot for each service department at the Pentagon. In July, Trump’s Pentagon nominees going before the Armed Services Committee came to a screeching halt. The committee didn’t hear from another slate of candidates for top military posts until Esper’s hearing this month.

In October, McCain said he was holding Pentagon nominations hostage as a result of a disconnect between Congress and the Pentagon. McCain railed that the officials, including longtime friend and Defense Secretary Jim Mattis, were not forthcoming on several major concerns, including two deadly Navy ship collisions this summer, a change in war strategy in Afghanistan under loosened rules of engagement and the ambush last month in Niger that killed four American soldiers.

By late October, the committee saw a turn of events with several public and closed hearings on the Navy ship collisions, war strategy and Niger. A threat of a McCain subpoena on the Niger ambush triggered a personal Capitol Hill visit from Mattis.

McCain later said the committee was pleased with the new level of cooperation from the Pentagon and would lift the holds.

On Tuesday, however, McCain warned that he could reinstall the delay if the Pentagon doesn’t release information on an apparent change in Army recruiting to allow waivers in some cases of serious mental health illnesses.