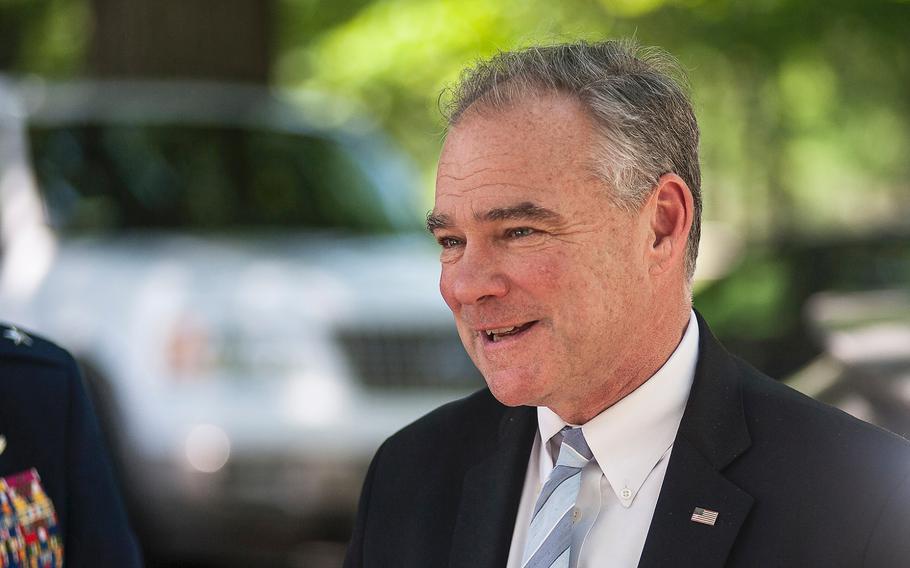 Sen. Tim Kaine chats outside the Russell Senate building on Capitol Hill in Washington, D.C. on May 17, 2017. (Carlos Bongioanni/Stars and Stripes)

WASHINGTON — Frequent moves across state or international lines; a spouse who is away from home for work for months at a time; insufficient and expensive child care.

The rate of unemployment for military spouses – those actively seeking work – ranges from three to six times higher than their civilian counterparts.

“The men and women who support their Marine, soldier, sailor or airman – they are critical to the support of our military mission,” Kaine said. “And if we can make their path a little easier, it’s a good thing for military readiness, family happiness. It keeps people in the military longer if they know their spouse continues to have opportunity.”

The Military Spouse Employment Act of 2018 seeks to give military spouses a leg up in federal hiring and to push the Defense Department to offer more opportunities for spouses: enable them to run private businesses on base, expand educational and training and give them more access to affordable child care.

Kaine said he wants to attach the bill to the 2018 National Defense Authorization Act with bipartisan support.

The senator, whose eldest son, Nat, is a Marine infantry officer, is a member of the Senate Armed Services Committee and co-chairs the Senate Military Family Caucus. He began looking at spouse employment a year ago, after another initiative helped target job opportunities for Afghanistan and Iraq veterans. He met in the past year with spouses, business leaders and advocates.

“They talked about the frequent moves as a barrier to employment the number of job changes they were undergoing,” he said. “They talked about the difficulty of having a profession that requires a state license … and when you transfer from one state to the next, suddenly you don’t have that credential and it can take a while to get it.”

In a roundtable in October, spouses spoke about their frustrations at not being able to build careers or find jobs that paid enough to justify child care.

As those frustrations grew, more families were opting out of the military, hurting retention, he said.

“It speaks to the future of our military and speaks to the power of the force,” said Kathy Roth-Douquet, the CEO of Blue Star Families, before the legislation was introduced. “But it’s easy not to see the problem at all.”

The bill’s most impactful aspect would modify federal authority to fast-track the hiring of military spouses, since the most desirable jobs near military installations are often federal positions, Kaine said.

According to the Blue Star Families survey, 79 percent of spouses who apply for federal jobs don’t get them, even though there is a law that allows hiring managers to appoint military spouses. The process is cumbersome and doesn’t work quickly enough for spouses who move every few years, Roth-Douquet said.

In addition, the bill proposes that the Defense Department submit a plan to change rules to allow spouses to run their businesses on bases.

The Defense Department would look to increase affordable child care by changing hiring requirements for workers. This change, Kaine said, would probably not reap immediate results.

The bill also instructs the Defense Department to expand educational opportunities and training for military spouses. This includes increasing awareness for career training and education programs and scholarships; giving spouses greater access to transition training and counseling; and helping professionals get recertified when they move to a new state.

Roth-Douquet said she thought the legislation was a good start, but noted that changes need to focus not just on legislation but also nonprofits and private businesses, to make the job market friendlierand more flexible for military spouses.

“We’ve got an opportunity here,” she said. “It’s just a matter of us innovating the path forward and getting enough attention to do it.”