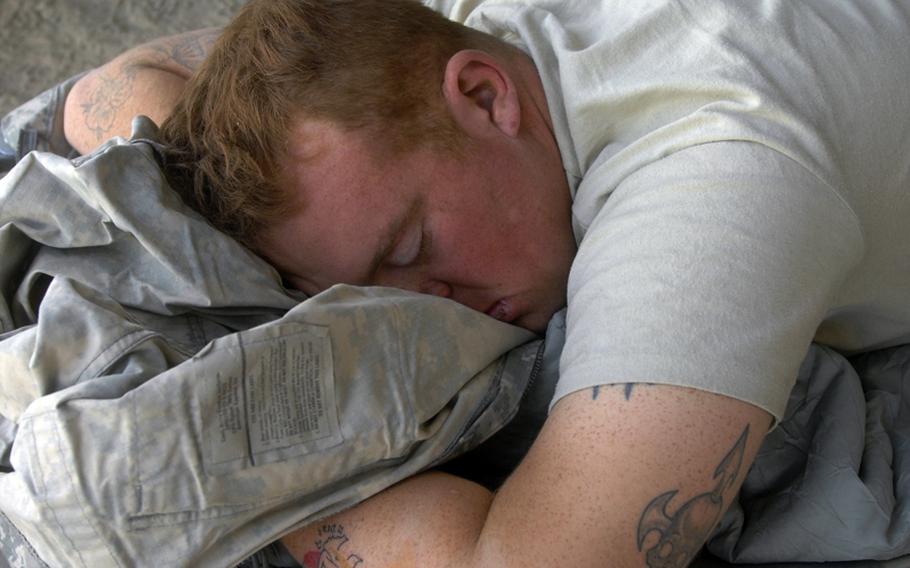 Marines play video games at a base in Afghanistan in this 2009 file photo. Doctors say troops who play video games to unwind after a long day in the field might not be getting enough sleep, and that this lack of sleep could lead to long-term mental problems. Some researchers think sleep deprivation could be a cause of the high suicide rate among military members. (U.S. Marine Corps photo)

Researchers are finding that longtime sleep deprivation can have devastating consequences, including chronic insomnia and psychological disorders.

Army doctors now recognize that sleep-deprived troops can be a danger to themselves on the battlefield, with slower reaction times, fuzzy memories and impaired judgment. But as suicides continue to spike within the military and more servicemembers are diagnosed with PTSD, some researchers and doctors have focused on sleep deprivation as a possible root cause of those issues as well.

Lt. Col. (Ret.) Dave Grossman, a former West Point psychologist who has written and lectured extensively on the psychological impact of combat, is convinced that chronic sleep loss is contributing to the rising suicide rate in the military.

Concerns about sleep-deprived soldiers in combat led Army doctors to create new guidelines last year requiring soldiers to get seven to eight hours of sleep each night when downrange. The previous guidelines recommended only half that.

But proper sleep is not easy to come by in combat, no matter what the guidelines say.

&ldquo;I&rsquo;ve got no problems sleeping,&rdquo; he said. &ldquo;I just drink a lot of energy drinks to stay awake.&rdquo;

While cans of Monster and Rip-It get tucked away on convoys, with troops guzzling three or four a day, research shows that stimulants &mdash; such as caffeine, dexamphetamine and modafinil &mdash; don&rsquo;t mitigate all the effects of sleep loss, said Dr. Thomas Balkin, chief of the Department of Behavioral Biology at Walter Reed Army Institute of Research, the military&rsquo;s leading sleep research center.

While these medications help troops get a good night&rsquo;s rest, they are not meant for long-term use.

Grossman, a former Army ranger, talks to troops about sleep deprivation, often peppering his message with anecdotes. World War I and World War II-era troops slept when they were away from the trenches, Grossman explains in the 2008 edition of his book &ldquo;On Combat.&rdquo; Other than the occasional beer with fellow soldiers, there weren&rsquo;t many other ways to relax. Today&rsquo;s troops, by contrast, return from patrols to well-appointed bases, where they can play video games, grab fast food, watch TV and get online.

Grossman said that he has learned from many noncommissioned officers that soldiers forgo sleep to play video games. Grossman, an occasional gamer, said he believes that games are not inherently harmful, but &ldquo;all they do is create sleep deprivation and social isolation, which are a guaranteed cocktail for depression.&rdquo;

Sleep deprivation can be especially dangerous in combat.

It narrows a person&rsquo;s focus of attention, Balkin said, leaving him or her unable to multitask as efficiently. A sleep-deprived soldier could fire accurately, for example, but his ability to spot a potential enemy, to decide whether to fire his weapon or to locate friendly forces would likely be hampered.

&ldquo;Virtually all cognitive performance is affected,&rdquo; Balkin said. &ldquo;A soldier is set up to make errors when sleep-deprived.&rdquo;

Balkin is educating senior military leaders on the importance of making sure troops get enough sleep and seeking ways that troops can optimize their sleep by banking extra hours. Soldiers would be forced to sleep more before being put in situations where they were likely to become sleep-deprived. Those who get extra rest, Balkin said, recover and return to a normal sleep pattern faster.

His team is also developing mathematical models to help commanders determine which troops are most vulnerable to sleep deprivation.

&ldquo;This way,&rdquo; he said, &ldquo;a commander can schedule, when it&rsquo;s possible to do that, soldiers who are in better shape.&rdquo;

Troops suffering long-term sleep troubles after a deployment, the sleep researchers say, should be a red flag to commanders that they are potentially at risk for other problems.

According to a recent Pentagon study, the rates of insomnia in the Marines and the Army doubled after a deployment.

&ldquo;It makes sense,&rdquo; said Dr. Alan Peterson, a researcher who has studied the effect of deployments on sleeping habits. &ldquo;The noise, the living conditions, the risk of threat are all factors that make it difficult for anybody to sleep. And the longer a person goes with disrupted sleep, bad habits and patterns can set in.&rdquo;

According to the Pentagon report, the rate of clinically diagnosed insomnia, defined as sleeplessness requiring medical intervention at least twice, has increased twentyfold in the past decade. There were slightly more than 1,000 reported symptoms of insomnia during 2000. By 2010, that number had jumped to 19,851 &mdash; with the greatest increase, by far, in the Army, followed by Air Force, Marines and Navy.

Balkin said the exact link between insomnia, psychiatric disorders and suicides within the military still needs to be carefully explored, since sleep disturbances are so common and their causes so varied.

He likened sleep troubles to a thermometer that shows that you have a fever.

&ldquo;You know there is an infection,&rdquo; he said, &ldquo;but you wouldn&rsquo;t be able to tell what that infection was.&rdquo;

Patients with sleep apnea &mdash; a condition in which the nasal passage closes over during the night, choking the sleeper &mdash; are twice as likely to suffer from depression. When their sleep apnea is cured, Stickgold said, their depression symptoms also lift.

Brain imaging shows that sleep deprivation causes the amygdala, the part of the brain that controls emotion, to become overactive, allowing more negative thoughts and emotions to intrude.

Dr. Anne Germain, a University of Pittsburgh sleep researcher who is scanning the brains of vets with post-traumatic stress disorder to see exactly what mechanisms are at work while they sleep, said that &ldquo;there is a very strong suggestion that sleep disturbance prior to a traumatic event can increase someone&rsquo;s risk of getting PTSD.&rdquo;

&ldquo;You want to let the smell go, the sound of the voices go,&rdquo; he said, &ldquo;and keep an abstract memory of the event.&rdquo;

Stickgold said sleep&rsquo;s role in memory formation is similar to that of a &ldquo;psychologist,&rdquo; helping a person place emotional events into proper context. With proper sleep he said, the memory will recede and integrate into a person&rsquo;s past &mdash; without it, it might not.

In PTSD patients, he believes that adrenaline-like chemicals flood the brain, keeping it from fully entering REM sleep, where the memory of the traumatic event can be broken down and pulled apart.

Instead the event is replayed, as though the person is watching a scene from a movie.

&ldquo;That&rsquo;s why you get these guys who say they can still smell it,&rdquo; he said. &ldquo;Every day is the day after it just happened.&rdquo;

When veterans with PTSD start sleeping better, many of their daytime symptoms disappear.

Germain, the University of Pittsburgh researcher, has investigated sleep therapies that eliminate vets&rsquo; nightmares, including prazosin, a medication that controls nightmares by depressing adrenaline, and image rehearsal therapy, which teaches vets to refocus the imagery in their nightmares to something less threatening.

The early results are startling, she said, suggesting these therapies can reduce the anger, irritability and poor concentration associated with PTSD.

Dr. Karin Thompson, a psychologist at the Veterans Affairs&rsquo; hospital in Memphis, Tenn., and an author of &ldquo;The Post Traumatic Insomnia Workbook,&rdquo; has also seen how improving sleep benefits vets with PTSD, especially those with hypervigilance.

In her sleep clinic, Thompson teaches vets methods that will allow them to &ldquo;reset&rdquo; their central nervous systems, she said.

She encourages them to set a sleep schedule; to avoid alcohol, which harms the sleep cycle; to wake up at the same time every day; and to begin relaxing one hour before going to bed by taking a bath, for example, or doing yoga. They should not watch television or surf the Web while in bed.