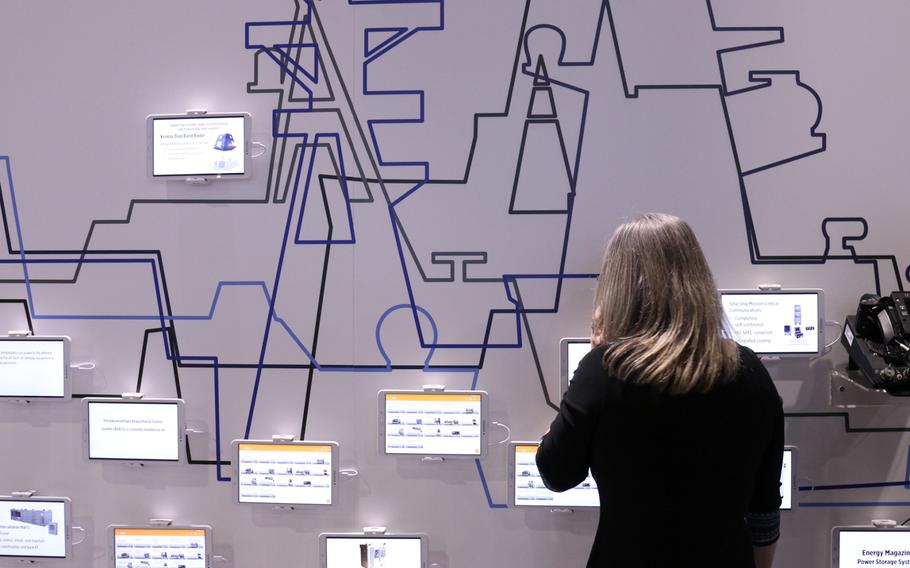 Buy Photo
A man checks out a model of the V-247 Vigilant, a tilt rotor unmanned aerial vehicle in development by Bell, at the Navy League's 2018 Sea-Air-Space Exposition held at the National Harbor in Maryland., from April 9-11, 2018. (Michael S. Darnell/Stars and Stripes) 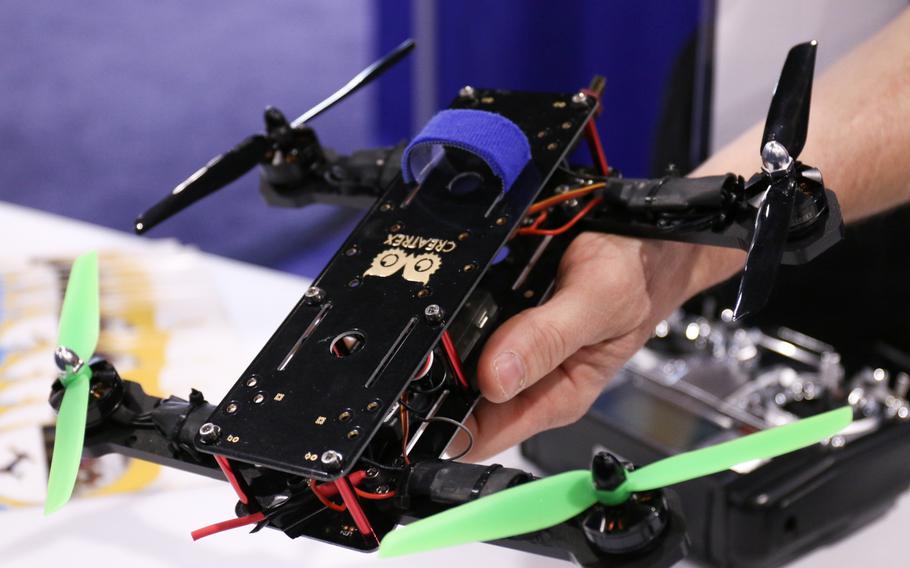 Buy Photo
Terence Fagan, a representative of Creatrex Education, shows off a drone that could be built by high school students during a presentation at the Navy League's 2018 Sea-Air-Space Exposition held at Oxen Hill, Md., from April 9-11, 2018. (Michael S. Darnell/Stars and Stripes) 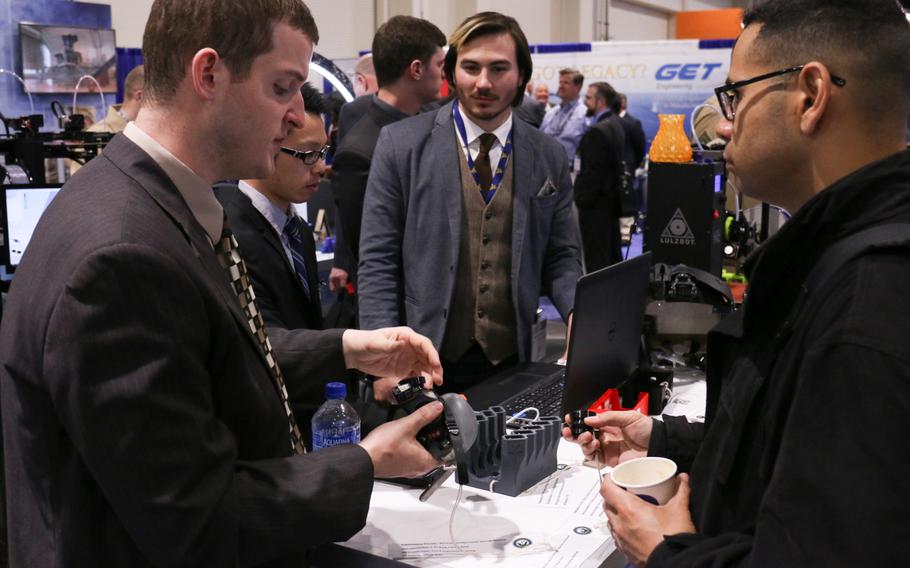 Companies as large as Boeing and Bell presented their latest defense projects, while smaller, niche groups like Creatrex Education sought to expand their reach with low-key demonstrations.

The military was there in force, showcasing tech in production along with gear they hope to field in the near future. Stars and Stripes was there to highlight some of the advancements at the three-day event, which began Monday.

Bell, the aeronautical tech giant, was on hand primarily to showcase its next-generation Navy helicopter trainer, the 407GXi.

This upgrade to the helicopter trainers used by Navy aviators offers a more direct, more modern pipeline from training to the fleet. “The TH-57 (Sea Ranger) is very capable. So the Navy is turning out pilots, they’re still able to meet mission every year, but they know the aircraft is getting older and it’s time to retire it,” said Scott Clifton, Bell’s director for domestic and business development.

The Sea Rangers have been in use since the Vietnam War, according to Naval Air Systems Command, and became the Navy’s primary training helicopter in the ‘80s. With its age and the disparity between its capabilities and what pilots might fly in the fleet, Clifton said the newer 407GXi will make the transition from training to operational go more smoothly.

Bell also talked about two tilt-rotor aircraft in development for the Army and Marine Corps. The first, the V-280 Valor, is the Army’s answer to the Marine Corps’ MV-22 Osprey.

Able to travel at more than 320 mph, the Valor is designed to outstrip the Air Force’s Special Operations Command variant of the V-22 and the MV-22.

Bell designed the Valor’s predecessors, and the company is applying the hard lessons learned from the Osprey’s development to the new generation of tilt-rotor aircraft.

“The Army is looking ahead at what’s next beyond helicopters and the idea that you need to go farther, faster,” Clifton said. “So, the idea is to take all that knowledge we’ve built up on tilt-rotors and apply that into something for the next generation. It’s not the fight for today, it’s the fight for tomorrow.”

The Valor is a long way from operational use – it had its first official flight in December.

Further off is the V-247 Vigilant, Bell’s unmanned aerial vehicle designed with tilt-rotor technology. The drone was built for the Marine Corps to have an unmanned platform capable of taking off from ships.

“The idea is to take everything we’ve learned on tilt-rotor and now we’ve applied it to the unmanned space,” Clifton said. The Vigilant will be capable of everything from electronic warfare to air-to-air combat, he said. All within the size of an aircraft that can be folded to the size of an H-1 helicopter.

Production of the Vigilant is tentatively set for 2023, Clifton said.

Not all of the tech at the Sea-Air-Space Expo was in development. Some – like the 3-D printing display by Marine Corps Systems Command — were showcasing current tech in ingenious new ways.

Master Sgt. Gage Coduto, an explosive ordinance technician with the EOD Technology Division, showed how 3-D printing can save money and cut down on wasted man-hours.

He said Marine EOD units are using 3-D printing machines to create components ranging from doorknobs to water charges. The parts can be made in a matter of hours, bypassing the often lengthy and cumbersome bureaucracy of the supply chain.

“Quick replacement parts, innovative ideas, long-delay items … things that we have a hard time getting, we can make them on the spot, get them to the field and get the job done,” Coduto said.

That flexibility saves money; printed components cost a fraction of normal replacement parts. It’s a boon for the EOD training community, since many of the plastic polymer replacement parts are going to be blown up.

The 3-D printers at the expo were in the lower price range – about $2,500 each, he said. More advanced models can create operational components out of metal.

While Coduto said 3-D printing isn’t a one-stop solution for manufacturing needs, the ability to quickly produce components when and where needed could change the face of military supply and logistics.

Creatrex Education is a relatively new company, arriving on the scene in 2012 with an interesting mission: Get kids excited by science, technology, engineering and math, or STEM.

Their plan is to get kids to build flying drones at school. Creatrex representatives will come to interested schools and guide teachers in building drones to fly in their gyms.

Creatrex co-owner Terence Fagan said there are three model kits. The first is a basic snap-together model designed for fourth- and fifth- graders. The second, created for middle school students, introduces soldering and software to the mix. The high school version is made of metal and is a more complex, powerful model.

While robotics clubs exist in schools across the globe, Creatrex hopes their flying drone projects will pique the interest of even more potential STEM majors.

“The big thing that they’re learning is confidence,” Creatrex co-owner Gerald Holt said, “as well as working through failure and difficult situations. So, at the end of it they should have the skills that a hands-on engineer would need.”