Sanders gets praise, blame for time as head of Senate veterans' affairs committee 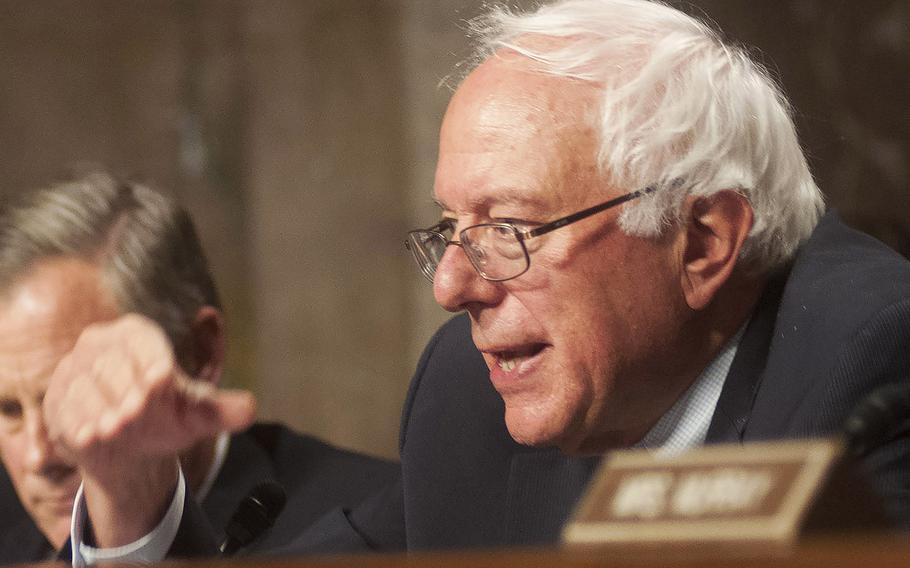 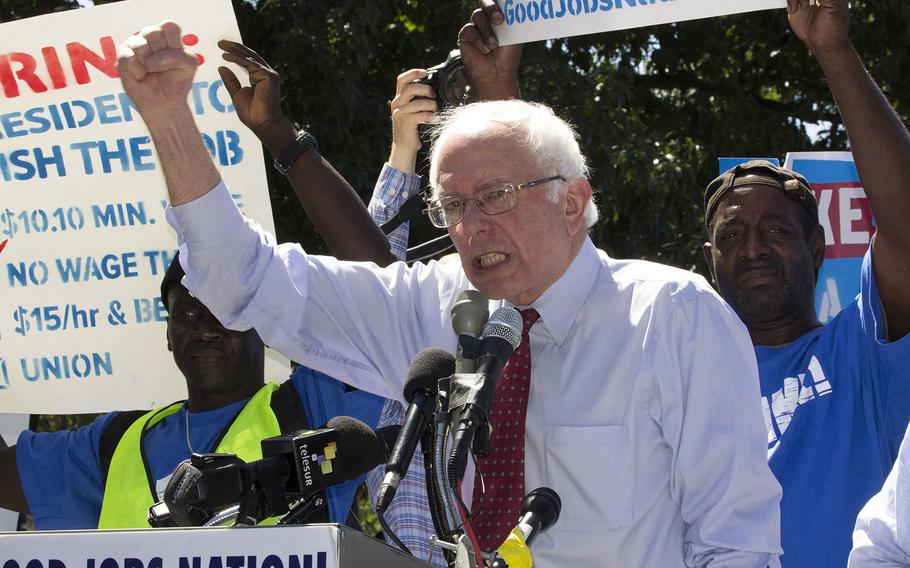 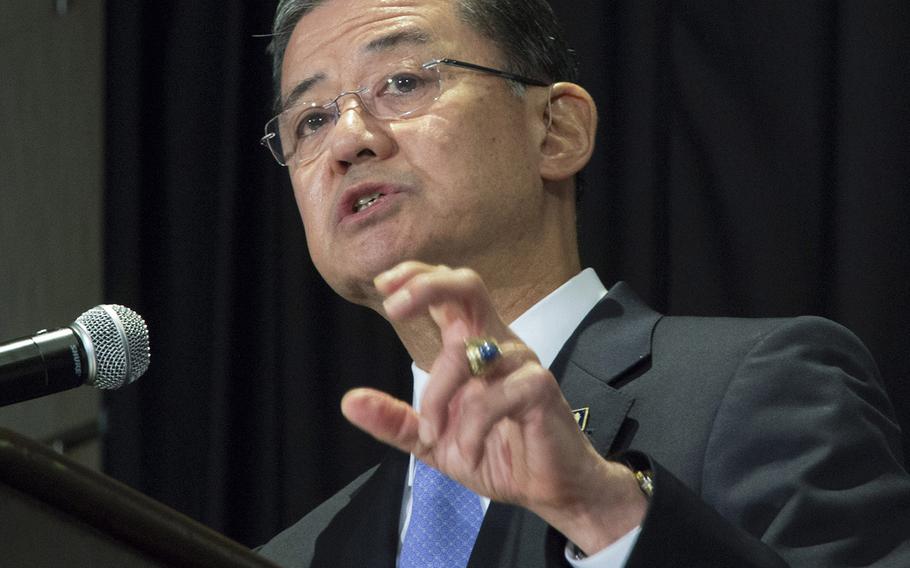 Buy Photo
Secretary of Veterans Affairs Eric Shinseki, at a conference on veterans' homelessness in Washington, D.C., in May, 2014. (Stars and Stripes)

WASHINGTON — Sen. Bernie Sanders is either a dogged fighter for veterans’ benefits, a leftist blinded to a nationwide veterans’ care scandal by his faith in government, or a pragmatic compromiser who reached across the aisle when major legislation for vets was on the line.

As the former chairman of the Senate Committee on Veterans’ Affairs, the Vermont independent-turned-Democratic presidential contender has had more direct influence on veterans’ policy than any of the other remaining seven candidates and backers and critics have wildly divergent views about his legacy. He served as chairman from 2013 to 2015, a span that included the revelation of what has become an ongoing scandal in health care and benefits that cost former Department of Veterans Affairs Secretary Eric Shinseki his job.

But for now, Sanders’ record as committee chairman is being defined by a little-known employee appeals board keeping the VA from disciplining senior leaders accused of wrongdoing.

Sanders has long fought for increased benefits for military veterans, but his signature legislative achievement was the 2014 Veterans Access, Choice and Accountability Act, a law aimed at reforming the VA that was hammered out during heated negotiations with Senate and House Republicans. Some credit him for getting that law through a deeply polarized Congress, while others blast him for not doing enough to respond to the nationwide VA scandal that broke in the spring of 2014.

One thing everyone agrees on: Sanders insisted that the bill include language that would continue to allow senior VA executives to appeal discipline to the Merit Systems Protection Board, which handles federal worker cases. Federal unions saw the board as vital employee protection, and Sanders was able to get it into the final bill despite Republican objections. Sanders’ compromise was to include language giving some veterans the ability to seek private care through their VA coverage, even though he strongly opposed privatization of the VA.

This year, the quasi-judicial merit board has overturned the demotions or firing of three senior VA executives, even as its judges confirmed the employees’ wrongdoing, embarrassing the VA and calling into question whether suspect executives will face any punishment.

Lawmakers and VA officials have blasted the merit board’s decisions, and VA Secretary Bob McDonald has endorsed a plan to allow firing senior executives with no appeals process.

“I have much more faith in the VA secretary than I do the Merit Systems Protection Board,” House Committee on Veterans’ Affairs chairman Rep. Jeff Miller, R-Fla., who helped negotiate the 2014 law with Sanders, said in an email to Stars and Stripes. “I wanted to cut the MSPB out of the disciplinary process for VA senior executives in order to give the secretary the ability to quickly discipline those who deserved it. Sen. Sanders, however, insisted that the MSPB remain involved. In order to pass a law to help veterans suffering from the VA scandal, we had to compromise.”

A former aide who advised Sanders at the time, said Sanders and negotiating partner Sen. John McCain, R-Ariz., had a difficult path to passage.

“It was very important to the senator to have some level of appellate rights for individuals so we didn’t see potential firings that were without merit,” said the aide, who asked to be anonymous because her job prevents her from speaking to reporters..

“There was a lot of non-willingness of folks to improve veterans’ health benefits,” she said. “I think he had a strong negotiating partner in John McCain, which really helped that. You had two people that knew they had to act.”

“Bernie Sanders worked very hard when he was chairman of the Veterans Affairs’ Committee,” McCain told the New York Times. “He and I had many disagreements, but we were able to come together, finally, after very spirited discussions.”

One veterans group that has been especially critical of Sanders is the Iraq and Afghanistan Veterans of America. Its chief policy officer, Matt Miller, called the 2014 bill a “Band-Aid on a gaping wound” that did not address systemic problems.

“As chairman, Sanders’ main purpose was to provide oversight over VA,” Miller said in an email to Stars and Stripes. “In this task, he failed. Instead of oversight, Sanders refused to acknowledge the severity of the scandal, holding only one related hearing that focused on what the VA was getting right.”

Sanders gets high marks among many veterans’ advocates for bringing them to Capitol Hill to ask about priorities for legislation and improving benefits.

Disabled American Veterans Executive Director Garry Augustine recalled when Sanders brought him and other veterans’ advocates to his office at the height of the VA crisis in 2014. “He not only listened, but he really wanted to hear what we had to say,” Augustine said.

Others fault Sanders for being too slow to act as revelations surfaced in April about manipulated wait times at the Phoenix VA Medical Center -- the beginning of a nationwide scandal.

As allegations unfolded, the House Committee on Veterans’ Affairs, chaired by Rep. Jeff Miller, R-Fla., held a flurry of hearings. Sanders, meanwhile, called for an independent investigation and said he wouldn’t make a judgment before getting the results.

“There is, right now, as we speak, a concerted effort to undermine the VA,” Sanders said at a town-hall meeting in May 2014.

Republicans on the Senate veterans’ committee called for hearings in an open letter to Sanders on May 22, 2014, eight days before Shinseki was forced to resign.

“It is obvious from the recent VA scandals that the department desperately needs vigorous oversight,” Sen. Richard Burr, R-N.C., said in the letter. “It is our mission as a committee to provide oversight and yet the chairman has chosen to ignore requests for hearings.”

Sanders’ office declined a request to interview the senator, instead releasing a statement saying Sanders successfully fought to get the VA the resources it needed to improve service to veterans.

“The idea that Senator Sanders -- in his role as chairman of the veterans’ committee -- acted slowly seems to be based on the idea that he didn’t hold as many hearings as the House did,” the statement said. “But you have to ask -- what did those hearings lead to? Senator Sanders approach was to focus on legislation to fix the problem -- to talk to people at VA, talk to the veterans’ service organizations that represent millions of veterans throughout the country -- to understand the root cause of the problems and find a practical way to address them.”