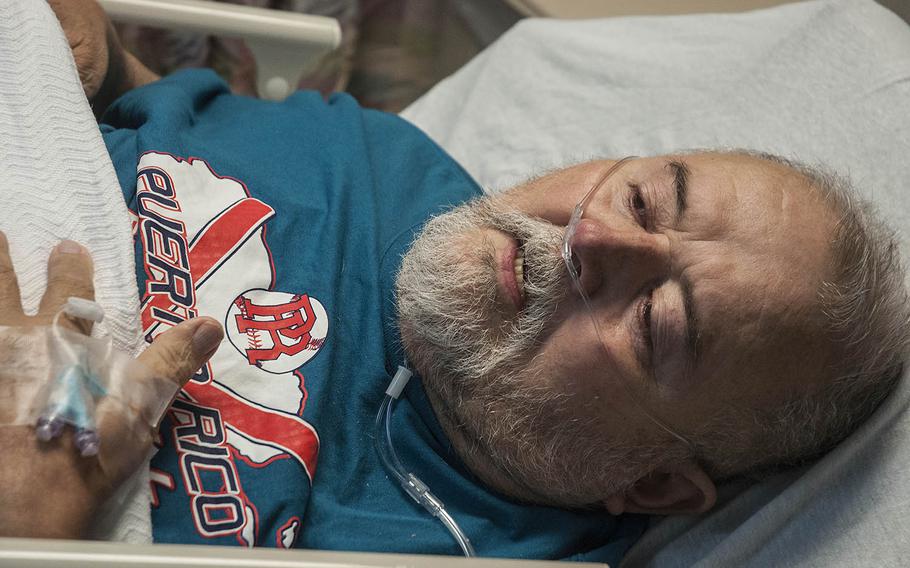 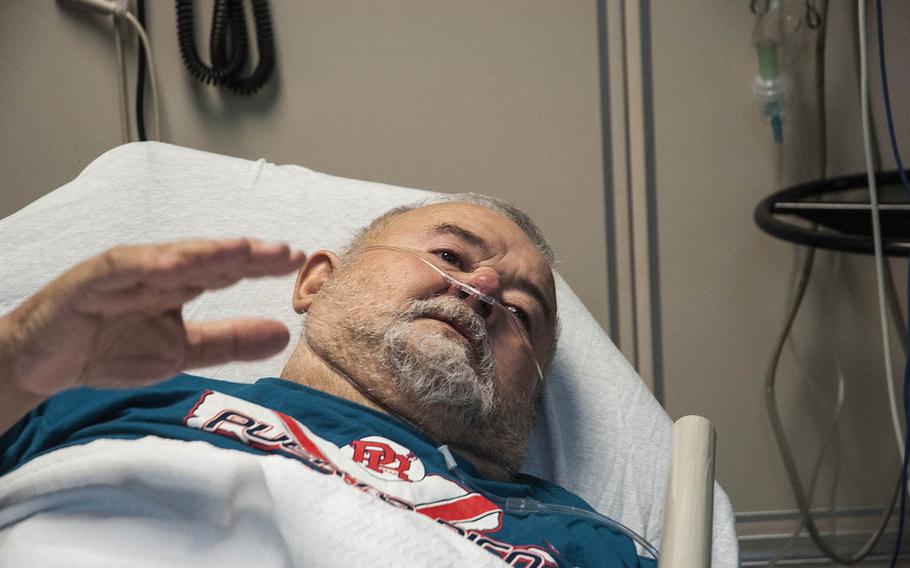 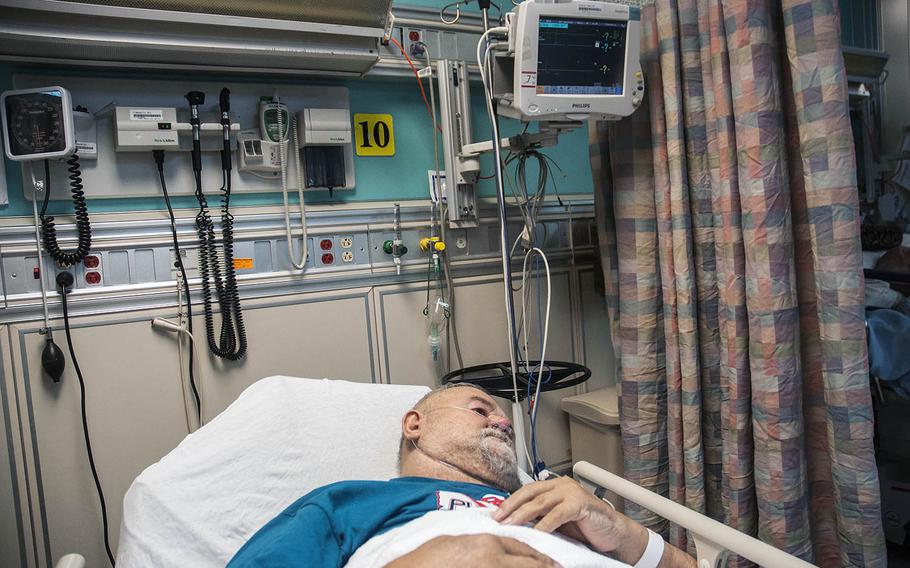 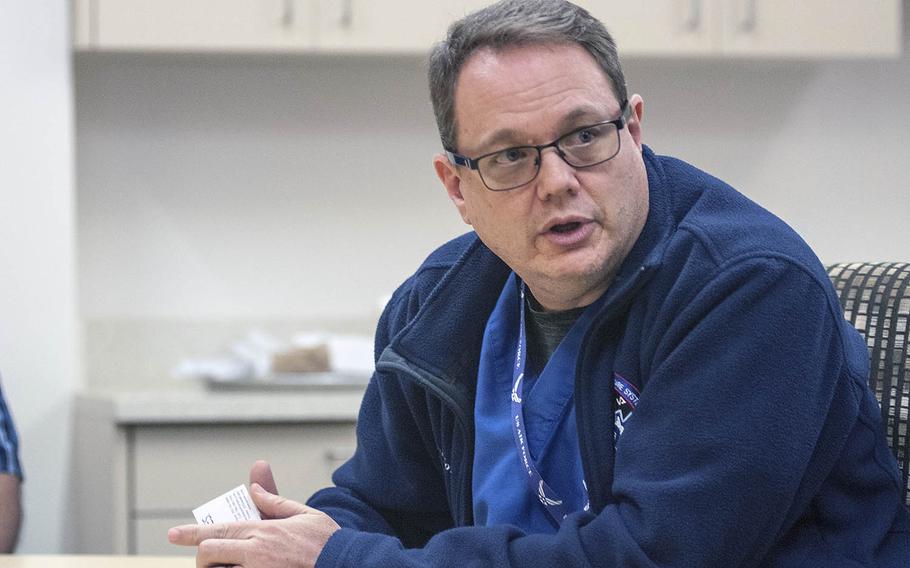 Hector Alonso, chief of the Emergency Department at the Veterans Affairs Medical Center in San Juan, Puerto Rico, takes time from his busy schedule on Wednesday, Nov. 8, 2017, to recount how the hospital and its staff weathered Hurricane Maria. (Carlos Bongioanni/Stars and Stripes) 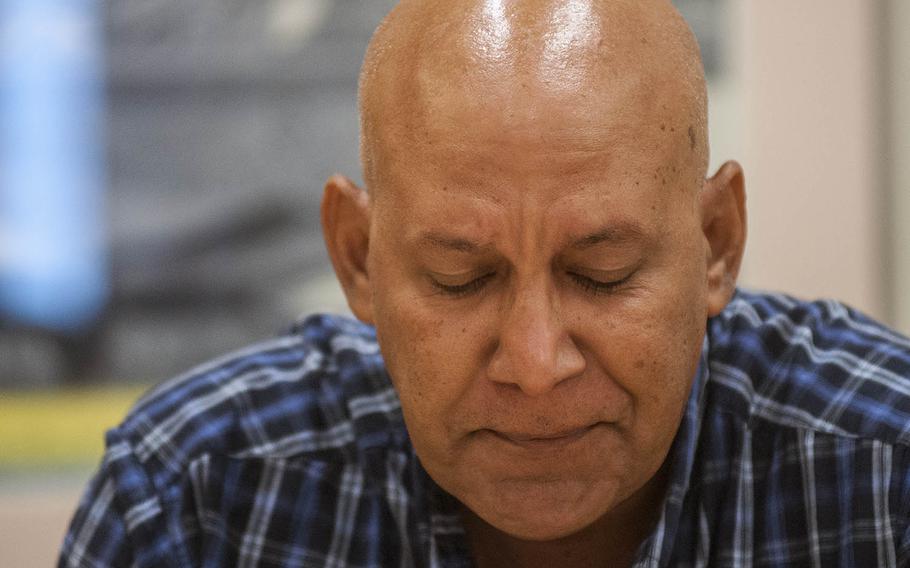 Cosme Torres, the area emergency manager for the VA's Caribbean Healthcare System, holds back tears on Wednesday, Nov. 8, 2017, as he tells of a veteran on Vieques Island who went without food for two days before Veterans Affairs Medical Center personnel in San Juan, Puerto Rico, brought supplies. (Carlos Bongioanni/Stars and Stripes) 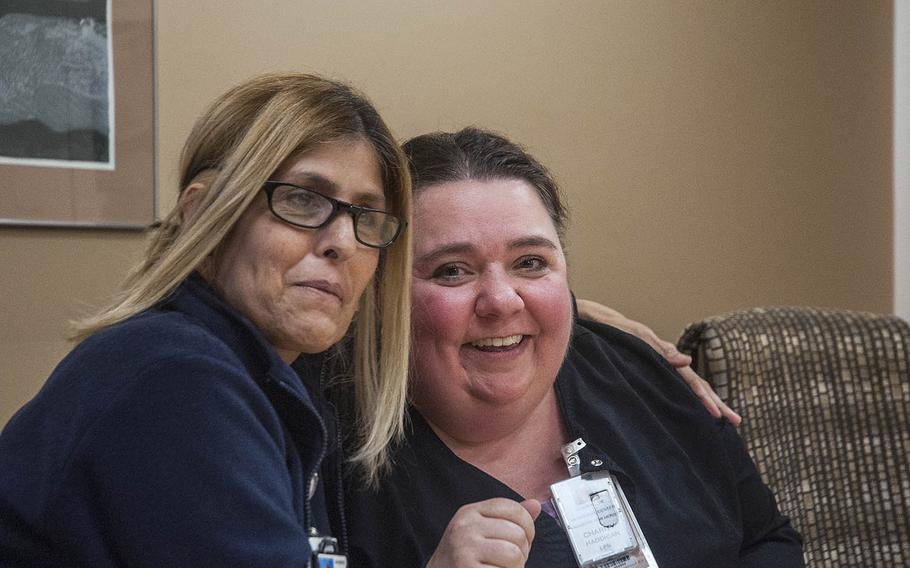 Charity Haddican, a licenced practical nurse from Sioux Falls, S.D., pushes a patient through a hallway to the Emergency Room at the Veterans Affairs Medical Center in San Juan, Puerto Rico, on Wednesday, Nov. 8, 2017. By request, the patient's face has been obscured. (Carlos Bongioanni/Stars and Stripes)

SAN JUAN, Puerto Rico — In barely a whisper, the bearded man on the gurney spoke with insistence.

It was the lack of light — electricity — that put Nelson Noriega here in this Veterans Affairs Hospital emergency room Wednesday.

The disabled 70-year-old Air Force veteran had been struggling since Hurricane Maria stripped most of the island of power and water.

His wife, who wasn’t well, flew to the U.S. mainland after he called her sister to send a ticket, he said. Noriega tried to fend for himself. But he has severe back problems, has trouble walking and suffers from emphysema. He uses a CPAP machine to breathe at night and took to sleeping in his car, where he could run the air conditioning.

He says he didn’t eat for several days, and then, Tuesday night, in his dark apartment on the outskirts of San Juan, he fell and couldn’t get up. He spent hours unable to call anyone, wondering whether he’d make it.

“All I ask is to let everybody know our conditions,” Noriega said in perfect English. “The burdens everyone here went through.”

Since the one-two punch of Hurricanes Irma and Maria bludgeoned Puerto Rico and the Virgin Islands in September, the emergency room at the VA hospital in San Juan has been operating at maximum capacity. Patient counts are up from 80 each weekday to as many as 120, and from 100 to 160 each weekend day, according to Hector Alonso, chief of emergency medicine. Not only are there more patients — people who were injured or whose health declined in the poor conditions — but many people with chronic ailments are in a more acute state, Alonso said. More elderly are coming in, and people who would be cared for at home have been forced out of damaged homes. The lack of power and water alone has complicated care for many, he said.

If families are not around to care for patients, there’s no one to release them to once they’ve been treated.

“We don’t want to throw them out on the street,” he said. “It complicates things.”

In many instances the VA has kept people after they were stabilized, simply because they had nowhere else to go.

Puerto Rico had not gotten the brunt of Irma, but nearby St. Thomas had, and its only hospital had been damaged. As the only federal health-care facility in Puerto Rico, the VA hospital activated a triage center at the airport, where staff tended to more than 90 patients evacuated from St. Thomas.

Then Maria came barreling in.

The staff prepared for two days, closing clinics and ensuring that VA patients who needed special care were safeguarded at the main facility in San Juan, Torres said.

Even during the storm, the hospital never closed.

When it was over, the staff barely had time to take stock. All but two clinics around Puerto Rico were immediately reopened. In Ponce in the south and Areciba west of San Juan on the northern shore – where clinics were badly damaged -- doctors and pharmacists were in place to give patients prescriptions, equipment and basic services.

“This wasn’t a regular hurricane,” Torres said. “It was like a nuclear bomb hurricane.”

With thousands of homes damaged or destroyed, and much of the island lacking power or running water, it quickly became apparent that staff and patients were in crisis.

To keep up with the intense pace the VA mobilized volunteers from around the United States, under a program called Disaster Emergency Medical Personnel System, or DEMPS.

Since mid-October, more than 400 volunteers – from doctors and nurses to administrative personnel – have worked in Puerto Rico in two-week rotations.

“It’s challenging but really rewarding,” said Charity Haddican, a volunteer from the VA in Sioux Falls, S.D. The primary care and women’s health nurse was inspired by her Puerto Rican colleagues to help any way she could.

“I am a nurse but if I can run to the lab or if I can take a person to X-ray to save a person that normally works here some steps – even mopping the floor -- I just want to give them a hand,” she said.

Military service makes people on the island extremely proud, said Torres, a retired Army veteran who served in Operation Iraqi Freedom. It was that pride that kept VA employees coming to work in the days and weeks after the hurricane, he said.

“Even with the challenges we faced every day, people came back to work for veterans,” he said.

In addition, Alonso said, in Puerto Rico sometimes veterans don’t feel fully appreciated on the mainland “in spite of their enormous contributions to our military.”

“So yes, we are very proud Puerto Rican veterans for our contribution.”

Dedication aside, the enormity of the disaster does weigh on the staff.

“We have had our fair share of breakdowns among employees,” said Alonso. “It’s been very emotionally charged.”

But people have shown an ability to adapt to their new reality, he said.

In the first days after the hurricane, Alonso said they were all so busy getting the hospital running that they couldn’t see the big picture. Communications were down. The switchboard couldn’t make calls.

But then he started seeing patients coming back, and saw the hospital’s ability to serve them. And he understood.

After Maria struck, VA staff around the island began seeking out the most vulnerable patients to make sure they were OK.

In Utuado, one of the hardest-hit areas where the storm washed out the main bridge connecting residents with supplies, staff had not heard from one patient in days, Torres said.

When they went to the man’s home, they saw it was badly damaged. They arranged to have him flown to San Juan for proper care.

On a different day, Torres and a team went to Vieques, a separate small island that is part of Puerto Rico, to bring medication and check on patients. He encountered a man whose condition was horrific.

“He had spent a couple of days without water, without food,” Torres said.

“We got that veteran into a helicopter,” he said, wiping his eyes. “We flew him back. He was admitted and he is fine.”

There was something about seeing a veteran suffering so much, Torres said.

“You look at the face of that veteran – that guy was a vet like me,” he said. It hurt him “to have that hero suffering … and knowing that guy was in need of food and water when we have food on the mainland.”

Seeing him later in a hospital bed, with the color back in his face and a big broad smile , made it all worthwhile.

Lying on the ER gurney Wednesday, Noriega said he had tried to keep going without being a burden. He didn’t want to bother his daughter, who lived on another part of the island.

But after his fall, he realized he should call her.

As Alonso left Noriega’s bedside, he wondered how he would find his independence again.

Even when the emergency passes, Alonso said, “how am I going to send him home now?”

“Who is going to take care of him?”