Buy Photo
Amasake-chaya is housed inside a traditional Japanese-style building, complete with a thatched roof. (Hana Kusumoto/Stars and Stripes)

Buy Photo
Amasake-chaya is housed inside a traditional Japanese-style building, complete with a thatched roof. (Hana Kusumoto/Stars and Stripes) 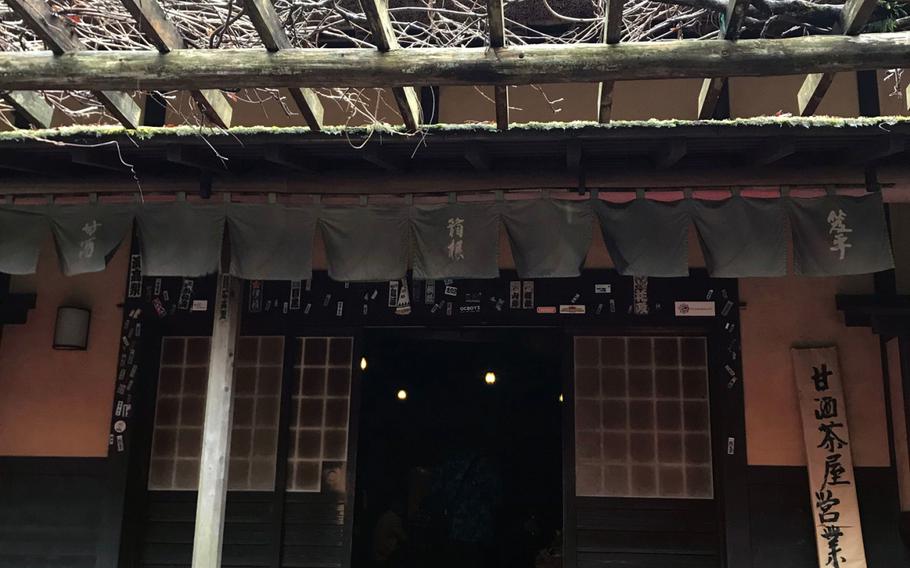 Buy Photo
Amasake-chaya, a teahouse and rest house located along the old Tokaido Road, has been serving the same amazake recipe to weary travelers since it opened in the 1600s. (Hana Kusumoto/Stars and Stripes) Buy Photo
Amazake is a sweet, warm, nonalcoholic drink made by mixing regular and malted rice and heating the mixture for over six hours. (Hana Kusumoto/Stars and Stripes) 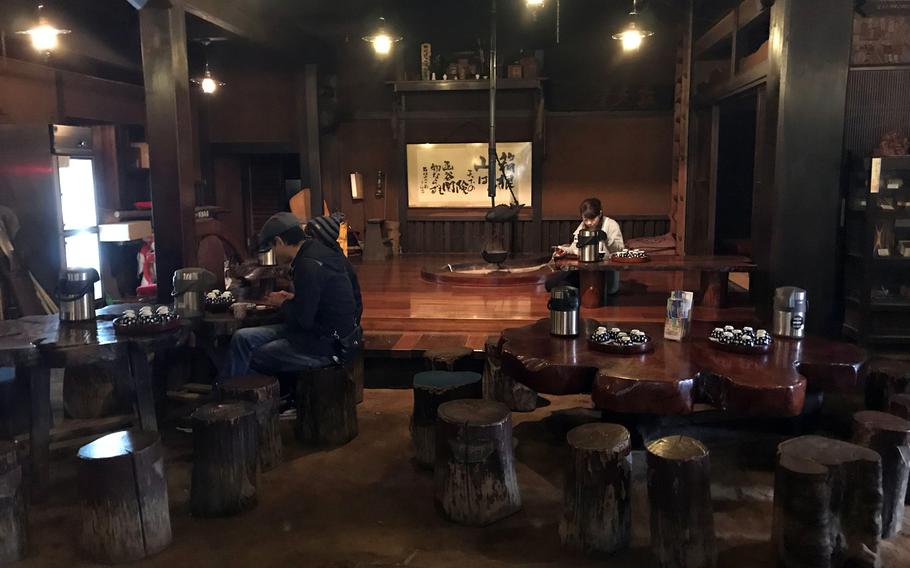 Buy Photo
The interior of Amasake-chaya is decorated with ladders and hunting tools used in the Edo Period. (Hana Kusumoto/Stars and Stripes)

A sweet, warm, nonalcoholic drink called amazake has refreshed and energized many a hiker who’s braved the steep slopes of Japan’s Mount Hakone over the past 400 years.

Amasake-chaya, a teahouse and rest house located along the Old Tokaido Road — which once served as the major route between Kyoto and Edo, now modern-day Tokyo — has been serving the same amazake recipe to weary travelers since it opened in the 1600s.

Amasake-chaya is housed inside a traditional Japanese-style building, complete with a thatched roof. Inside, visitors are welcomed by the warmth of an open hearth that fills the room with a pleasant, smoky aroma. The interior is decorated with ladders and hunting tools used in the Edo Period.

Amazake is made by mixing regular and malted rice and heating the mixture for more than six hours. The result is a drink that is naturally sweet, with no added sugar or artificial ingredients.

According to Amasake-chaya owner Satoshi Yamamoto, many people drink amazake to recover after strenuous activity.

“When you are tired, you want something sweet,” he said. “It helped customers energize at a time when sugar was valuable.”

A cup of Amasake-chaya’s famous amazake will set you back 400 yen (or about $3.60). It’s served alongside a selection of salty pickles to enhance the drink’s sweetness.

Although amazake can now be purchased everywhere from festivals to convenience stores, the amazake at Amasake-chaya has a gentle sweetness absent in commercially produced versions of the drink.

When asked about the secret ingredient of Amasake-chaya’s take on this traditional beverage, Yamamoto replied: “When you hike up the steep pass, amazake is much tastier.”

Amasake-chaya offers more than its namesake menu item. Hungry visitors can sample a variety of traditional Japanese food items, including chikara mochi (500 yen for two pieces), a type of dessert made from glutinous mochi (or rice) flour. The chikara mochi is offered in three flavors: soy sauce; kinako, or soy bean powder; and kinako mixed with black sesame.

Another item popular in the winter months is miso oden (450 yen), a soup-like dish featuring warm konnyaku, a type of gelatin-like substance made from konjac potatoes, stewed in a simple, hot broth and served with miso.

Other drinks are available, too, including iced green tea (400 yen) and shiso juice (400 yen) — a uniquely fragrant Japanese drink made from red shiso, a type of herb, and sugar.

Amasake-chaya is open daily, and Yamamoto said about 7,800 customers visit the rustic cafe during peak hiking season each fall.

Yamamoto said his grandfather kept Amasake-chaya open when his father was forced to take on other work to earn a living. Customers returned to the area, and the business, once Japan’s economy improved in the 1970s.

The original building burned down in 1973, and customers donated money and materials for the one that stands today.

“It is not my store,” Yamamoto said. “It is the customers’ store.”