Saipan, USA: Pacific island wants to emphasize that it's part of the United States 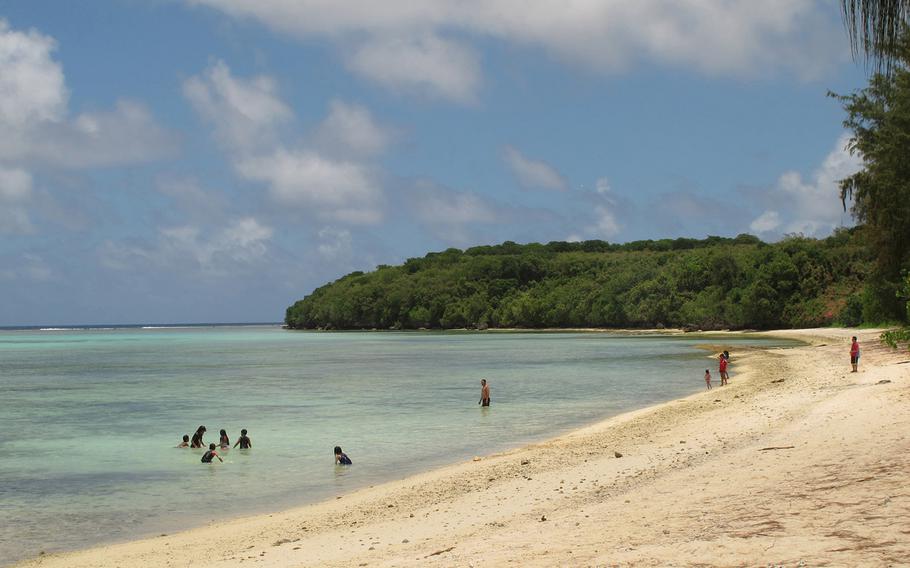 While Micro Beach is best known to tourists, Pau Pau Beach, shown here, is a favorite among locals. (Erik Slavin/Stars and Stripes)

While Micro Beach is best known to tourists, Pau Pau Beach, shown here, is a favorite among locals. (Erik Slavin/Stars and Stripes) 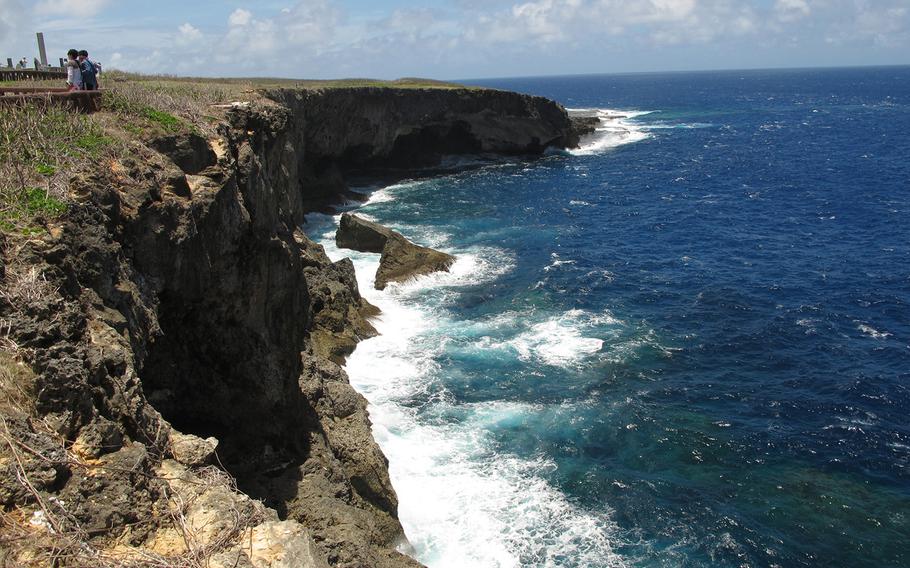 Suicide Cliff, where many civilians, told by the Japanese military that the invading Americans would show no mercy, jumped to their deaths in 1944. The nearby area is now dotted with international peace memorials. (Erik Slavin/Stars and Stripes) 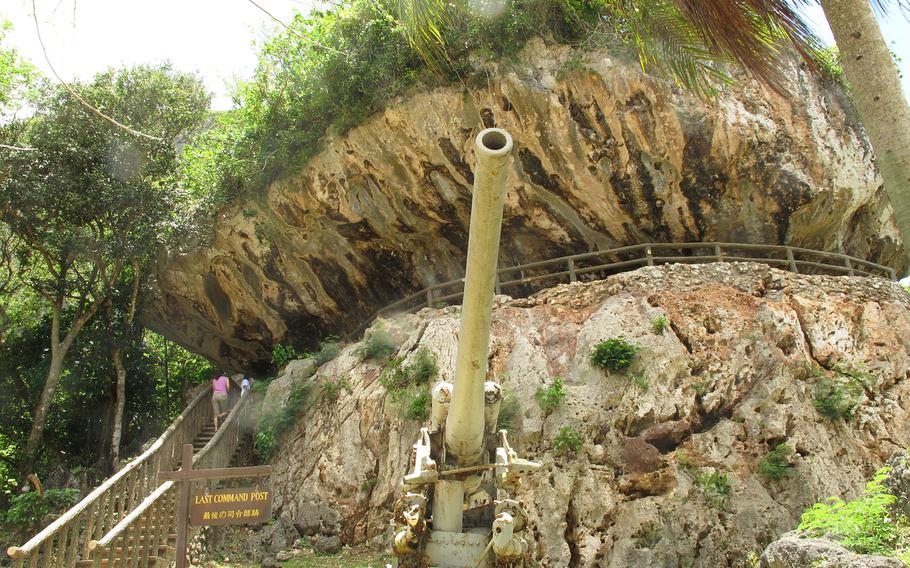 The Last Command Post is where Japanese soldiers held off the American advance during the Battle of Saipan in 1944. Many of the remaining soldiers jumped from the cliff behind them rather than surrender. (Erik Slavin/Stars and Stripes) 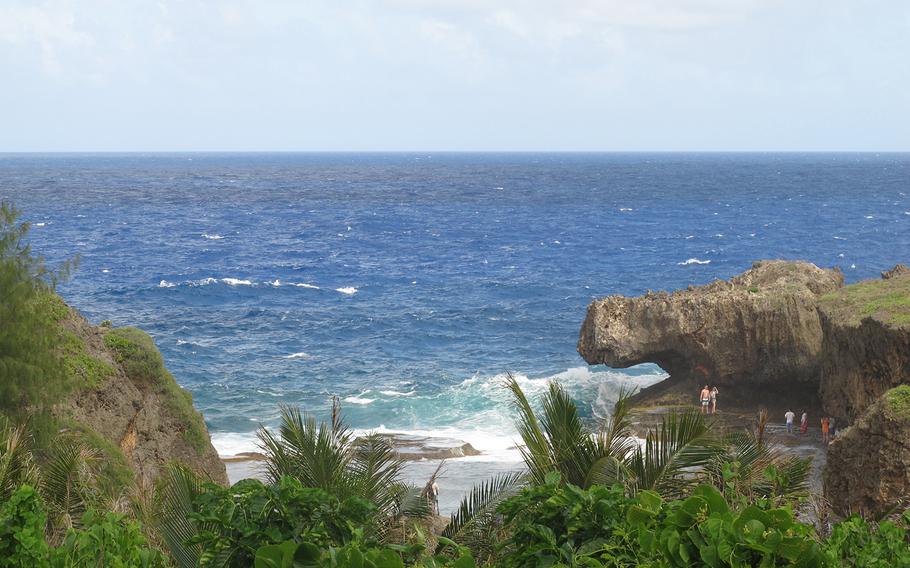 San Juan Beach and its crocodile-shaped rock are a gentle 20-minute hike -- or a short drive over dirt and rock -- from the main road in Saipan. (Erik Slavin/Stars and Stripes) 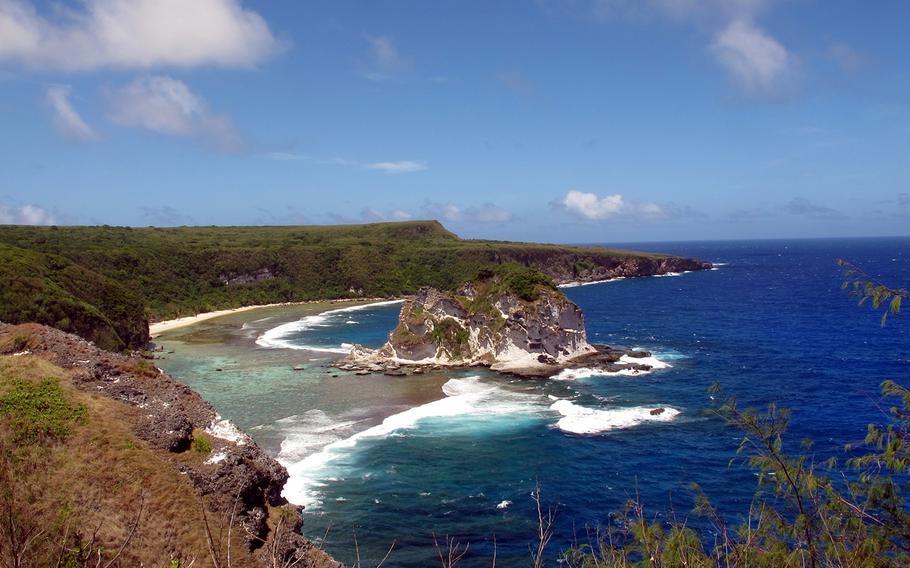 The outlook to Bird Island is also the end of the line for paved roads on the Saipan's north coast. (Erik Slavin/Stars and Stripes)

I’m sitting at Godfather’s Bar, a mobster-themed place staffed entirely by young Filipino women in Saipan, when the big question comes up among a smattering of former U.S. mainlanders: Why are you here?

“It feels more like the Midwest,” said Andy from Wisconsin, a former Yokosuka Naval Base sailor who moved to the tiny Pacific island in 2003. “You go to the bars, and people are friendly and welcoming, like back home. It wasn’t like that in Guam.”

In Guam? Guam, another small island 100 miles away, was too big for you?

“I come here and a few other places around, and it feels like ‘Cheers,’ ” Andy said.

Keeping with the “Cheers” theme, it wouldn’t take long for just about everyone to know your name on Saipan, an island about three-quarters of the way to the Philippines, starting from Hawaii.

The whole island is about 12 miles long and six miles wide at most, and its largest town counts about 3,500 residents.

It’s a place where 24-hour video poker halls proliferate and women at nominal massage parlors call out to single men walking by. It’s also a place where elementary school children perform a taiko drum dance and invite tourists to join in.

For most American and Japanese visitors, Saipan is above all a place where postcard landscapes overlie the pain and sacrifice of war.

Thousands of Americans and tens of thousands of Japanese servicemembers and civilians died during the three-week Battle of Saipan in 1944. Reminders of the war are found throughout, from rusting tanks and guns on land to the ships and planes that now serve as artificial reefs for the dazzling diversity of life in Saipan’s nearby waters.

In the north lies Suicide Cliff, where Japanese civilians who had been told tales of American savagery jumped to their deaths. The cliff drops 820 feet into indigo surf and jagged rock.

Peace memorials now dot the overlook at Suicide Cliff and the nearby Last Command Post, where the Japanese held off the American advance as long as they could.

When the end became inevitable, the Japanese soldiers climbed the cliff above them and jumped off what is now known as Banzai Cliff.

After the war, Saipan continued under U.S. jurisdiction and voted to form the Commonwealth of the Northern Marianas, along with Tinian and Rota.

While self-governing, the CNMI remains a commonwealth of the United States. Saipan natives get U.S. passports but don’t pay federal income taxes or have their vote counted in national elections.

The island’s “Saipan, USA” license plates show how keen islanders are to remind everyone that they are still part of America. The military actively recruits here, and a small Army shoppette probably provides the island with a large share of cheap beer.

Nevertheless, the majority of the island’s population, including tourists and workers, probably carries a foreign passport.

The largest ethnic group is Filipino, and the island does bear some similarity to a laid-back island in the Philippines.

Native Chamorro and Carolinian people make up the second-largest group, while the bulk of tourists are Chinese, Korean and Japanese. U.S. mainlanders often come from the ship crews that stop off in Saipan.

The cultural mix is reflected in the island’s bars and restaurants. The Asian restaurants cater to tour groups from their respective countries, and many are as authentic as you’ll find overseas.

Barbecue and seafood restaurants are best for Chamorro-inspired cooking. The Naked Fish offers up a fine fried reef fish of the day, as well as a good Hawaiian-style ahi poke.

The Shack in Oleai makes hearty and healthy breakfasts. The Alaskan crepe is a winner, as are the smoothies and coffee. On an island where restaurant service isn’t particularly good, The Shack staff’s relentless helpfulness is a welcome shock.

The Shack is open at 8 a.m., which is when a lot of divers pick something up before heading out to the reefs. Saipan is internationally known for its scuba diving, and its premier attraction is The Grotto. After walking 116 steps down a staircase, snorkelers and divers jump into an ocean-fed pool.

Divers continue into the caverns, where visibility ranges between 50 and 90 feet. Sea turtles, large fish, rays and nudibranchs are common sights. A dive guide is highly recommended in the caves, and Harry at Axe Murderer Tours provides free rental gear to active duty military.

There are several other world-class dive and snorkel sites, some of them accessible after jungle hikes. In many cases, like after a hike to the Forbidden Island and its small tide pool, intrepid travels are rewarded with a place all to themselves.

It’s those moments that make Saipan worth the 40-minute flight from Guam, which did indeed seem like Metropolis in comparison. Maybe Andy from Wisconsin had a point after all.