Safety, higher pay outside ISAF for working children of Kabul 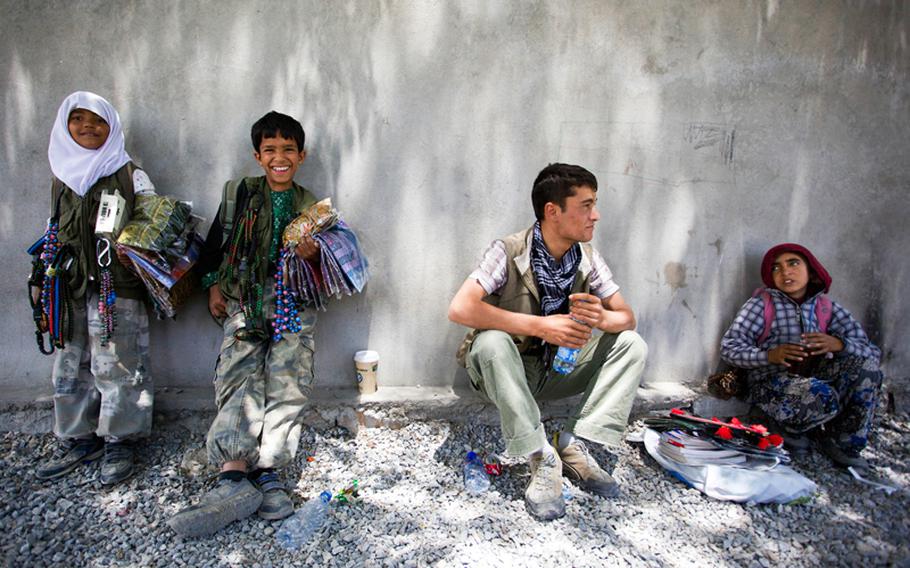 Maleka, Samir, Zubai and Farzana -- 5, 10, 15 and 10 years old respectively -- sell various items, mostly scarves, bracelets and phrase books, to coalition troops walking between bases in a secure area of Kabul. Their fathers are unemployed, and the kids work here, they say, out of necessity. (Matt Millham/Stars and Stripes)

Maleka, Samir, Zubai and Farzana -- 5, 10, 15 and 10 years old respectively -- sell various items, mostly scarves, bracelets and phrase books, to coalition troops walking between bases in a secure area of Kabul. Their fathers are unemployed, and the kids work here, they say, out of necessity. (Matt Millham/Stars and Stripes) 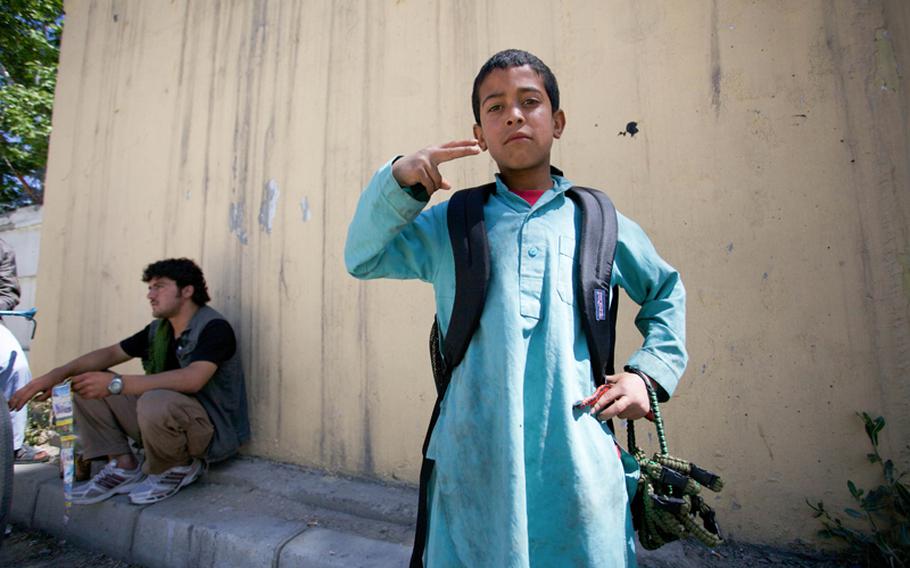 Basir, 10, sells bracelets to coalition troops outside the International Security Assistance Force headquarters in Kabul. Squatting on the curb is Safiullah, 20, a phone card salesman who got Basir started in the business. (Matt Millham/Stars and Stripes) 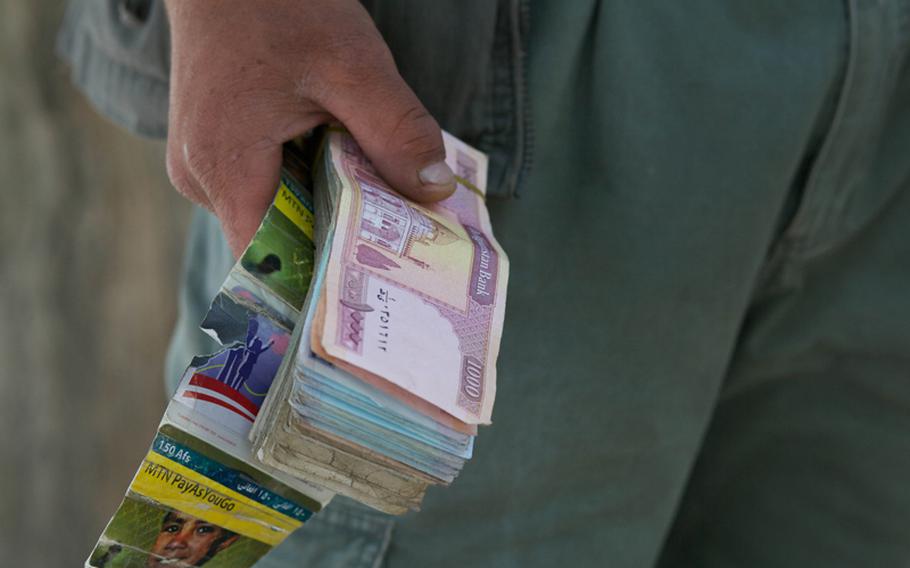 Safiullah holds a stack of cash and phone cards as he waits for Afghan workers from coalition bases and nearby embassies to leave work. Some days he makes money, some days he does not. (Matt Millham/Stars and Stripes) 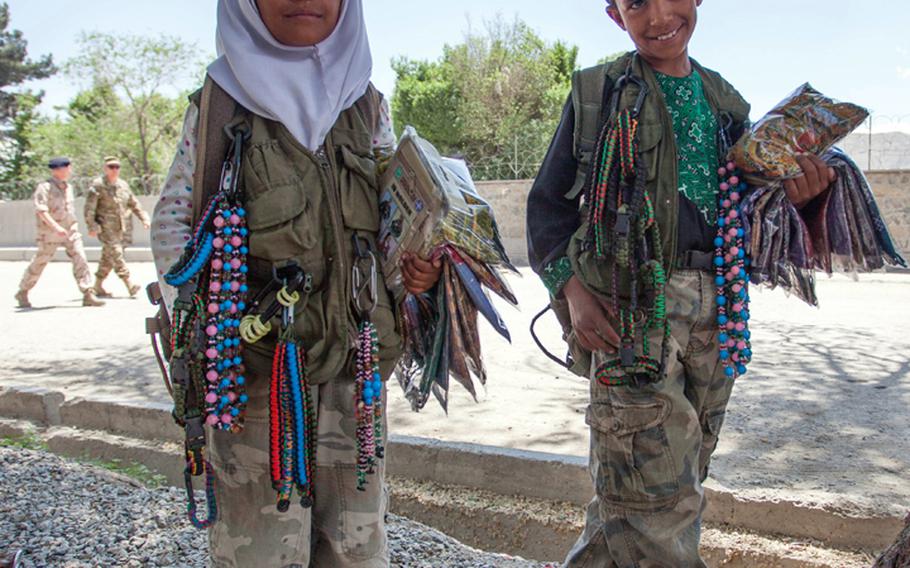 Maleka, 5, and Samir, 10, stand on the street near Camp Eggers, NATO's training headquarters in Kabul, as coalition troops walk by. (Matt Millham/Stars and Stripes) 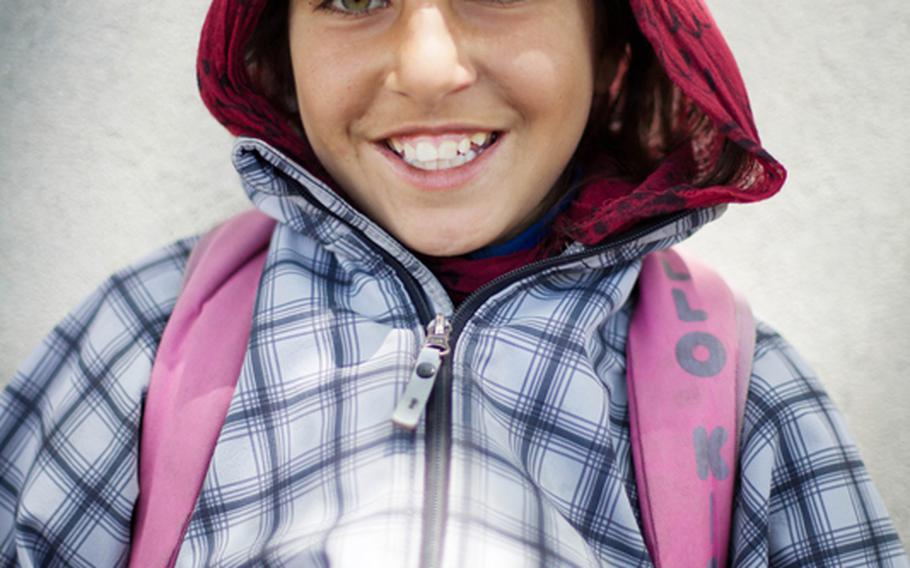 Farzana, 10, sells scarves, bracelets and decorative mirrors to coalition troops walking among a cluster of bases in a relatively secure area of Kabul. She's here almost every day, including Fridays, the Afghan weekend, when personnel flood to the International Security Assistance Force headquarters from other bases for its weekly bazaar. (Matt Millham/Stars and Stripes) 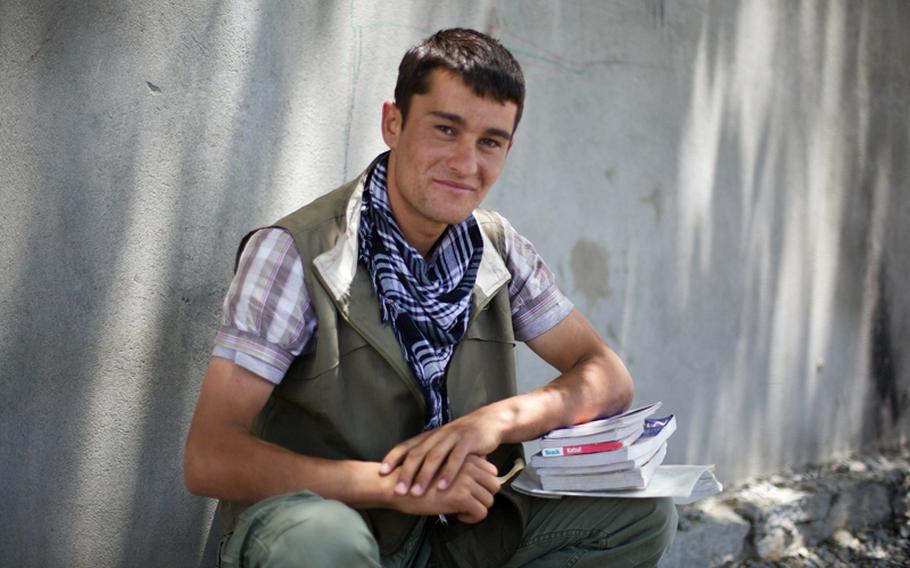 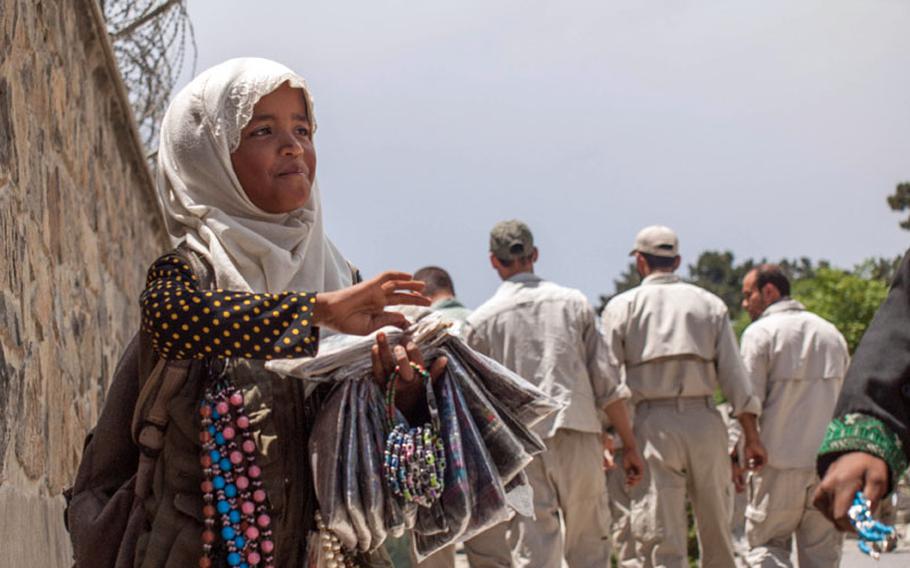 Maleka, 5, sells scarves and bracelets on the street between NATO's training headquarters at Camp Eggers and the International Security Assistance Force headquarters around the corner in a secure section of Kabul. (Matt Millham/Stars and Stripes) 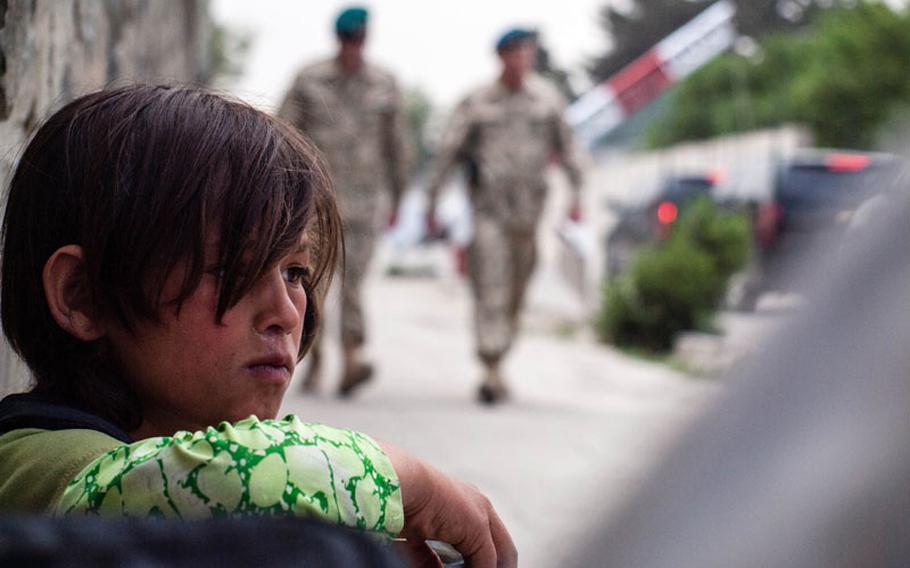 Parwana, 9, waits for customers to buy her bracelets. (Matt Millham/Stars and Stripes) 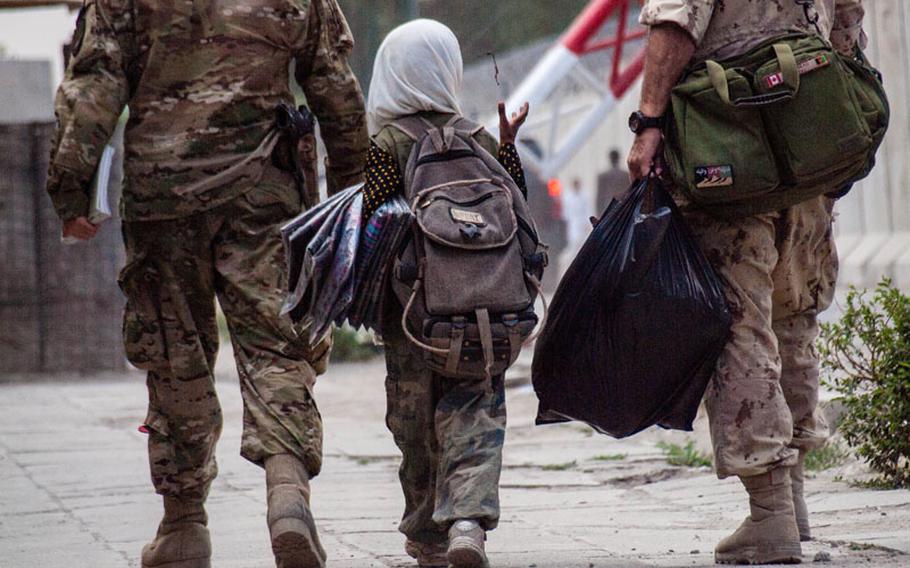 Maleka, 5, tries to sell scarves and bracelets to American and Canadian soldiers walking between bases in a secure area of Kabul. (Matt Millham/Stars and Stripes) 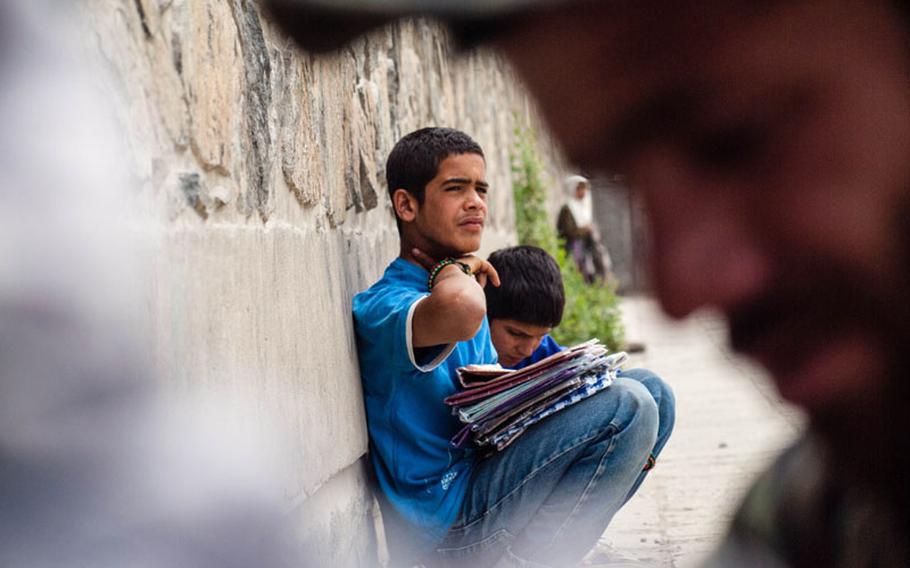 Shamsdin, 14, a scarf dealer, awaits customers on a sidewalk between NATO bases in a secure area of Kabul. Most of his customers are American and coalition personnel. (Matt Millham/Stars and Stripes) 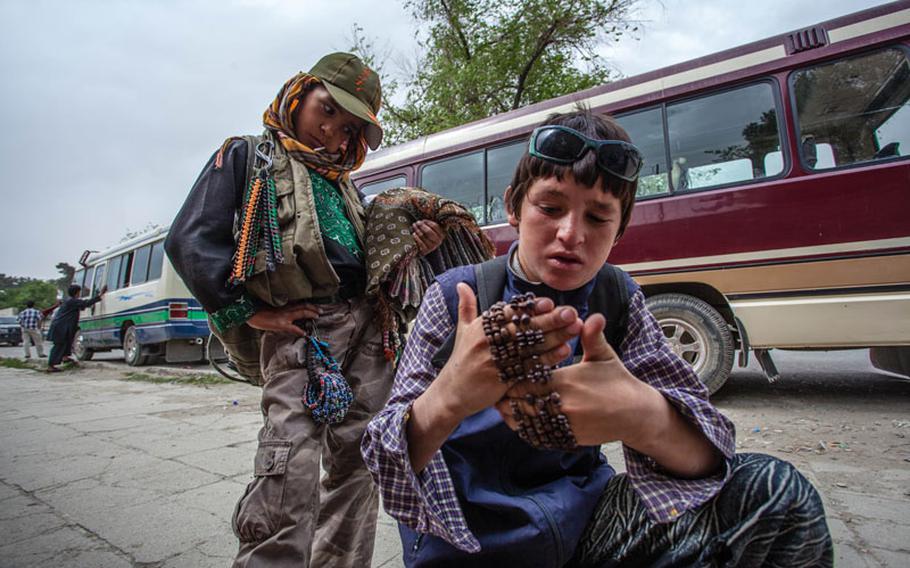 Samir, 10, and Wais, 12, are newcomers to street sales. Both began in the last few months, selling bracelets and other inexpensive items to American and coalition troops walking between bases in a secure area of Kabul. (Matt Millham/Stars and Stripes) 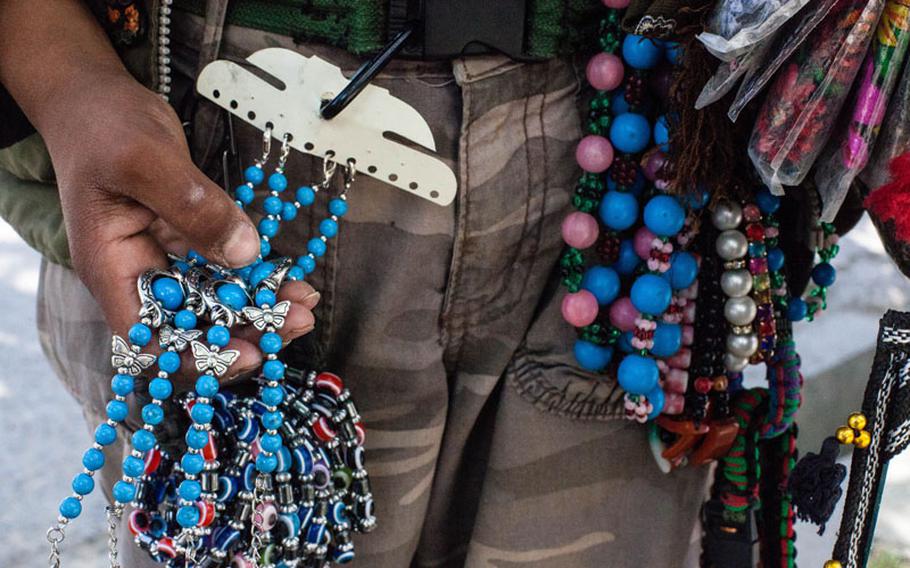 Samir, 10, shows off some of the bracelets he's trying to sell to American and coalition troops. The price depends on how much people are willing to pay and how desperate he is to make a sale, but the bracelets usually go for about $2 each. (Matt Millham/Stars and Stripes) 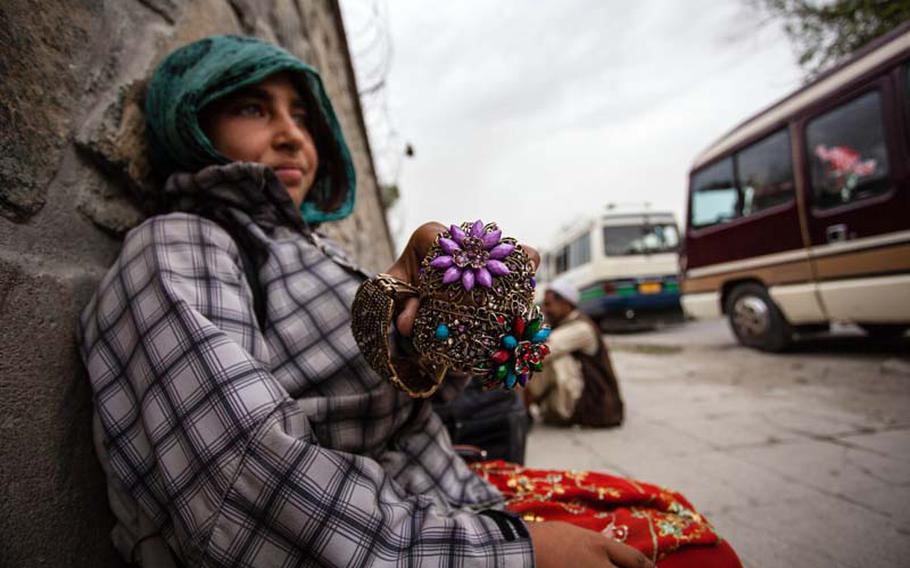 Farzana, 10, shows off some metal bracelets she plans to sell to American and coalition troops. (Matt Millham) 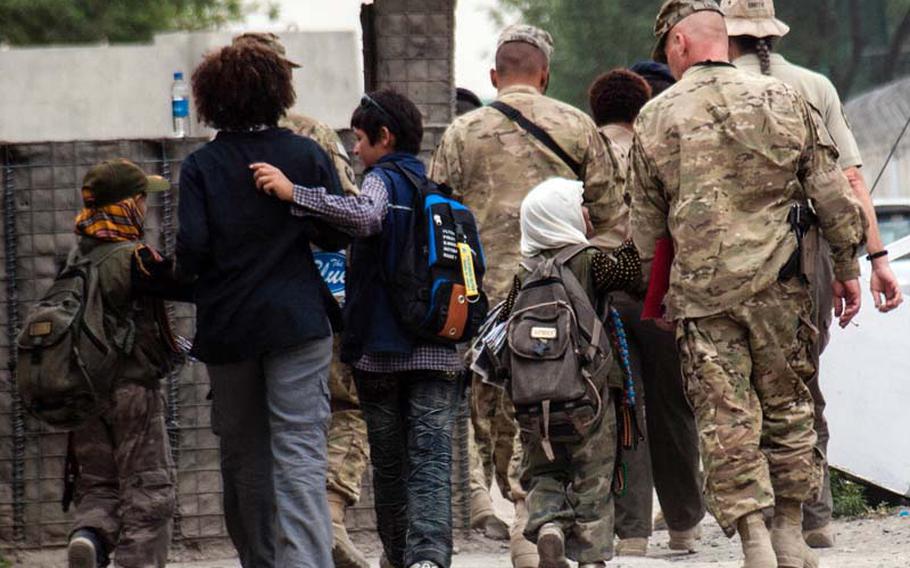 One has her school supplies. The other, bracelets and scarves that the 10-year-old hopes to sell to coalition troops on the streets outside the U.S.-led war&rsquo;s headquarters.

Her father is out of work, and this, she said, is how she pays for school uniforms and supplies, and for the food that feeds her family of 13.

Farzana is one of about 40,000 children working the streets of Afghanistan&rsquo;s capital, where the bubble of adequate security helped spur a boom in child labor.

Children are at work all over the city, washing cars, pushing wheelbarrows and making bricks. They weave through heavy traffic selling packs of gum to drivers stuck in traffic, shine shoes in the city&rsquo;s busy downtown and pick through the piles of garbage that dot Kabul&rsquo;s bedraggled streets.

And at least two dozen, ranging in age from about 5 to 15, work the streets outside the International Security Assistance Force&rsquo;s headquarters, a concrete-walled compound set among a cluster of bases and embassies in a relatively secure part of downtown Kabul, selling scarves and bracelets to Westerners.

With few exceptions, the children&rsquo;s fathers are out of work, some because of injuries or illnesses, others because opportunities are slim in a job market saturated with refugees who came to Kabul to find work or escape violence. Despite the billions of dollars funneled through the city in international aid, unemployment here is still an estimated 40 percent.

Like most of the child entrepreneurs peddling here &mdash; just 200 yards or so from the office of allied commander Gen. John Allen &mdash; she does so out of necessity. Without the $30 or so she makes each day her family wouldn&rsquo;t have anything. So she walks to the front gate of ISAF headquarters every day after class &mdash; a three-mile trip &mdash; works about six hours, then walks home alone.

Asked whether she likes the job, she shrugged. &ldquo;I want to help my family.&rdquo;

A survey of more than 1,000 Kabul street kids in 2009 by the aid group Save the Children found that 61 percent worked because their families asked them to, and 10 percent said they had lost one or both of their parents during the war. Many, according to the aid group, work up to 15 hours a day in hazardous conditions for very little pay.

The streets outside ISAF headquarters are an attractive alternative, offering safety and higher pay. Most of the children who swarm coalition personnel making sales pitches in broken English make at least $20 a day &mdash; more than the average Afghan adult.

The ISAF base &ldquo;is of course a favorite spot,&rdquo; said Christine Roehrs, media manager for Save the Children in Afghanistan. &ldquo;International people are considered rich. And the kids have understood that for internationals, it&rsquo;s a heartbreaking sight to see children work all day.&rdquo;

Safiullah began working here more than 10 years ago after his father fell ill, and has found that to be true. He started here shining boots, then sold sunglasses to coalition troops. Having made the streets outside ISAF his business since the war began, he&rsquo;s seen a lot of kids come and go. In the last three years, he said, the number trying to make a living out here has ballooned.

&ldquo;In the beginning, it was just me and my brother. Nobody else.&rdquo;

Back then, business was good. &ldquo;Right now, no good,&rdquo; he said, complaining that coalition personnel have learned the value of the American dollar on the Afghan street, and that the $70 he used to get for a pair of sunglasses was, in Afghanistan, a small fortune.

Now, at 20, with his youthful charm gone, it&rsquo;s hard to get more than $5 a pair. So he&rsquo;s taken to selling phone cards to Afghans who work on the base and to bankrolling some of the younger merchants, buying them the bracelets and taking a small cut for himself.

One of them, 10-year-old Basir, used to wash cars for about a hundred afghani a day &mdash; about $2 &mdash; before Safiullah took him under his wing. Now Basir averages about $20 a day. A few times, when he was allowed to sell at an on-base bazaar at Camp Phoenix on Kabul&rsquo;s eastern fringe, Basir said he made $100.

&ldquo;These are good kids,&rdquo; Safiullah said, chuckling as Basir ran off with his bracelets to catch a pair of Western troops walking out of the ISAF compound, yelling as he went: &ldquo;Hey mister; hook a brother up!&rdquo;

While it&rsquo;s not as profitable as it once was, selling here is still more lucrative than in the city proper. That&rsquo;s why Safiullah stays, but he knows the business won&rsquo;t last. When the troops go, the money goes with them. After that, &ldquo;I don&rsquo;t know. Maybe someday, if I get no job, I go to army or police.&rdquo;

One of the sellers who Safiullah said showed up with the new wave of street sellers is Kushi, a 14-year-old scarf dealer who moved to the city from Panjshir province. Her father brought his wife and eight children here hoping to find work; it didn&rsquo;t pan out.

Bringing in as much as $70 a day, but usually closer to $20, Kushi said she&rsquo;s earned enough in the last three years to buy a small home in east Kabul, where her family now lives.

&ldquo;It is not free money,&rdquo; she said. &ldquo;The American people don&rsquo;t give me money; they are buying scarf.&rdquo;

But compared to selling on the Afghan street, it is relatively easy money, she acknowledged. She sells her scarves for about $10 each &mdash; about twice what she pays for them at Afghan bazaars. But she also knows she can&rsquo;t keep this job up much longer. Girls tend to retire from street sales at about the age of 16, when they&rsquo;re old enough to marry, to avoid sullying their reputations.

Still, she has no plans to quit working. Like Farzana, she goes to school six days a week, and after graduation she wants to become either a doctor or an interpreter for American forces &mdash; if there are still any around.

Coalition troops tend to treat the children well, buying what they offer, slapping high fives and bringing them food and water to get them through the long days. The Afghan forces who guard the area aren&rsquo;t so kind.

Neelafur, one of Kushi&rsquo;s sisters, was part of the gang of street merchants until about a year ago, when she befriended an American soldier who made a habit of overpaying her for scarves.

Afghan forces guarding the secure zone around ISAF caught on and tried to extort a cut of her profits, said Zubai, a 15-year-old book and map dealer who is friends with the sisters. When Neelafur refused to pay the guards, they publicly accused her of having an inappropriate relationship with the soldier, Zubai said.

Zubai knew the accusations weren&rsquo;t true. But he also knew that Neelafur risked losing more than her income if she stayed on the street. For a girl to lose her reputation in Afghanistan can bring shame to the entire family, and punishment for that offense is often harsh. Zubai told her it was probably best if she didn&rsquo;t come back.

Zubai, who has worked here for more than two years, has his own regular run-ins with Afghan forces, which have left him less than optimistic about what will happen after NATO leaves.

An Afghan guard approached him during an interview for this story, insinuating that if he wanted to keep peddling near his guard post, Zubai would give him a wristwatch. Zubai didn&rsquo;t have one. &ldquo;Maybe next time,&rdquo; the guard said in Dari before walking off.

He said that was nothing new. The area is guarded by a mix of Afghan soldiers, police and private security guards, all of whom have tried to shake him down over the years.

&ldquo;Every time they say, &lsquo;The police is better.&rsquo; No, they are not. Because every time I work here, I sell one book for $10 or $20, the police see me, they say &lsquo;Give me $2.&rsquo; If I don&rsquo;t pay, they make me leave.&rdquo;

Zubai said he has been his family&rsquo;s sole breadwinner since police extortion drove his father&rsquo;s modest fruit business into the ground. While he doesn&rsquo;t want to fall into the same trap, he pays because he is afraid of losing the income.