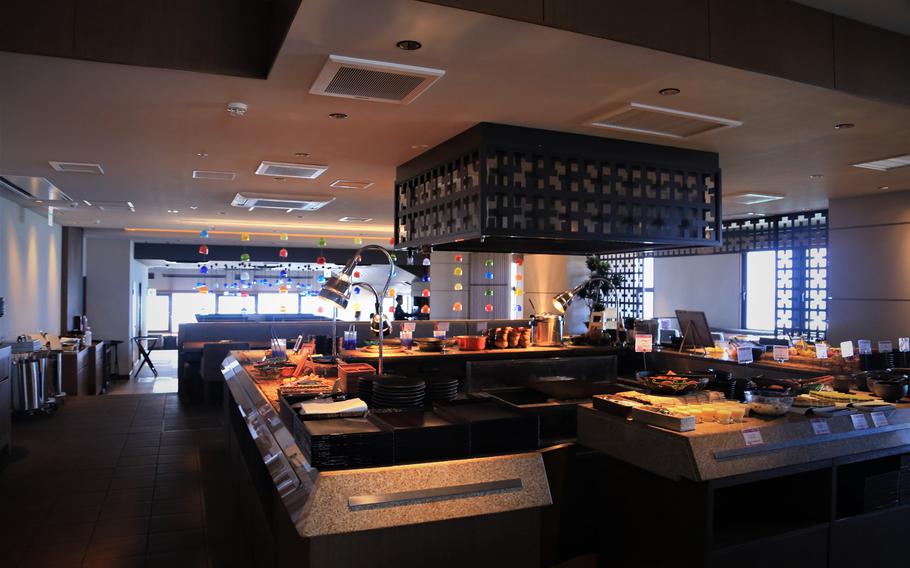 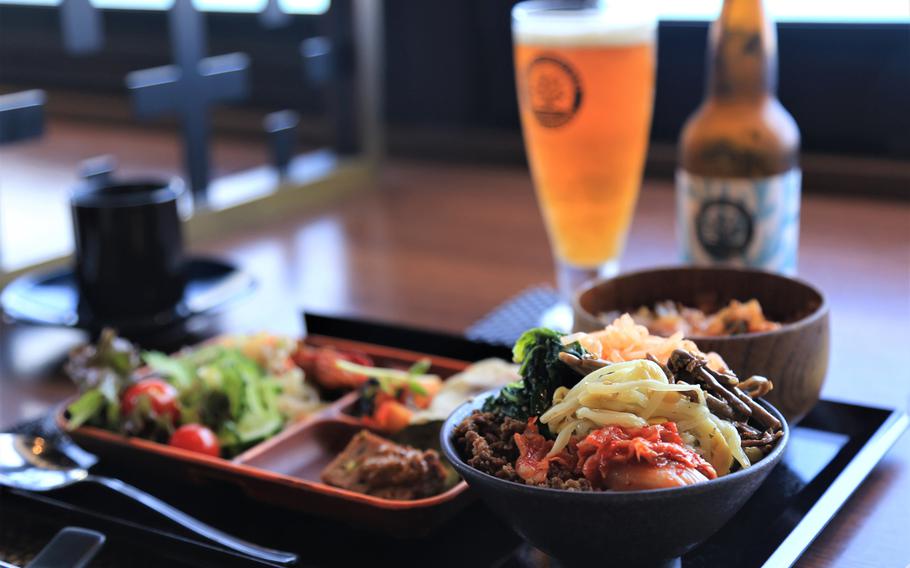 With so much food to choose from at Ryukyu BBQ Blue's buffet, it's easy to nearly forgot about the yakiniku or meat entrees you've ordered. (Aya Ichihashi/Stars and Stripes) 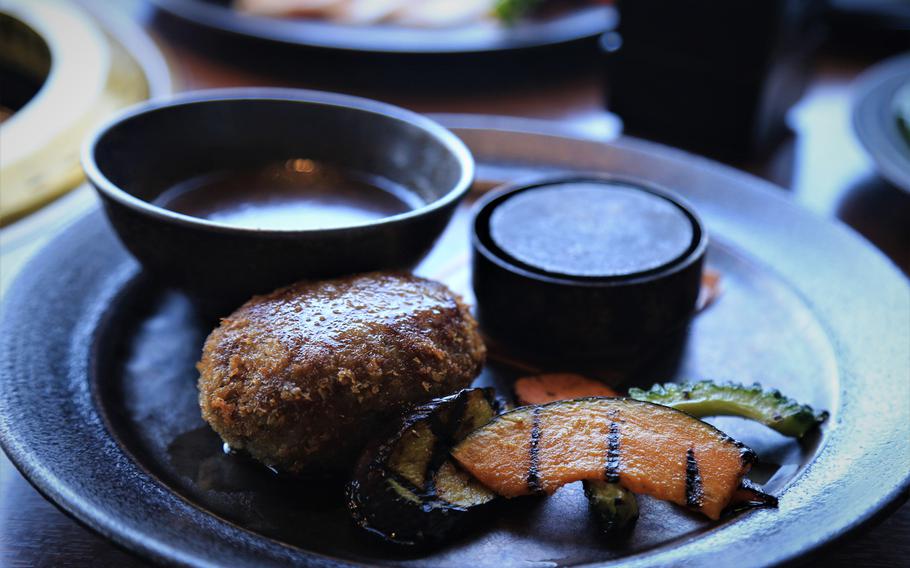 The hamburg steak is served on a hot stone plate that allows diners to cook the steak to their preference. (Aya Ichihashi/Stars and Stripes) 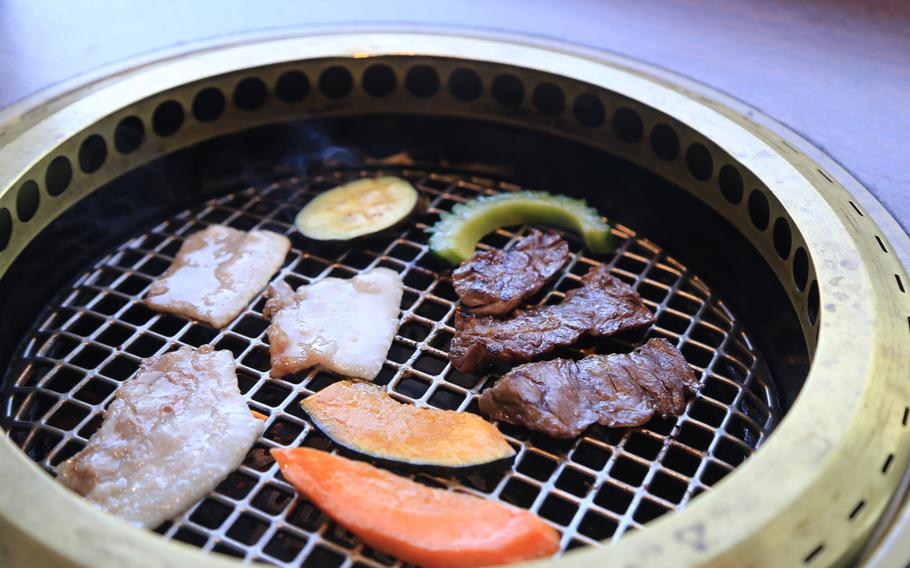 Ryukyu BBQ Blue specializes in yakiniku -- a type of Japanese cuisine where diners cook a variety of cuts of meat at their table upon a small grill. (Aya Ichihashi/Stars and Stripes) 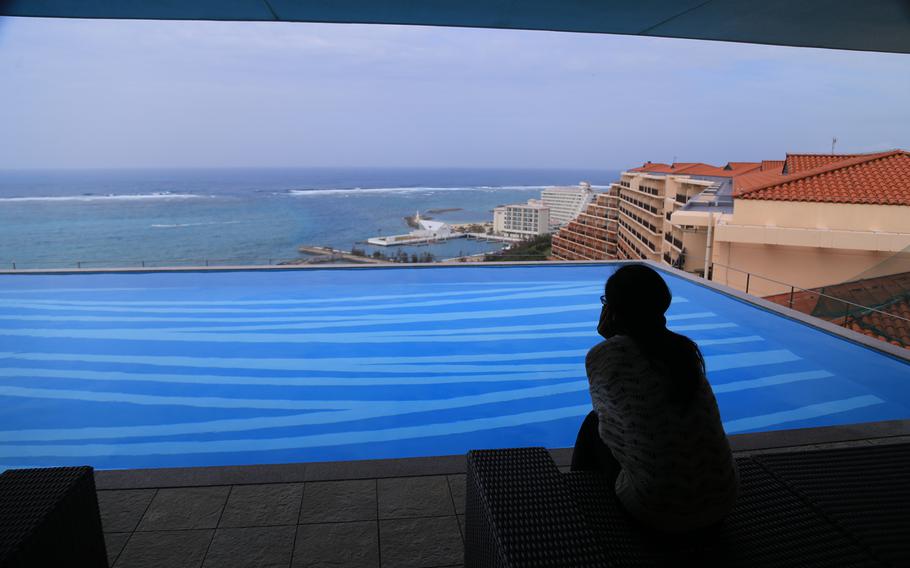 While not located on the beach, Ryukyu BBQ Blue sits on the 12th floor of the hotel's annex building and provides sweeping views of the East China Sea. (Aya Ichihashi/Stars and Stripes)

As a longtime resident of Okinawa, I often have friends and coworkers coming to me for advice on where to go and what to do on the island. The most common request? Where to enjoy a fine meal without breaking the bank.

Whether my acquaintances are celebrating a special anniversary or looking to treat visiting relatives to an upscale dining experience, it seems everyone always has the same requirements. The restaurant should be nice, but not too expensive. It should be tasteful and elegant, but not overly formal. It shouldn’t be too Americanized, but should also offer plenty for picky eaters to choose from. Most importantly, the restaurant should have an incredible view of Okinawa’s beautiful blue waters.

Ryukyu BBQ Blue fits the bill perfectly — it’s my top suggestion for anyone in search of an unforgettable dining experience on Okinawa.

Located in Onna Village, which is famous for its coastline and many resort hotels, Ryukyu BBQ Blue part of the newly built Kafuu Resort Fuchaku Condo-Hotel. While not located on the beach, the restaurant sits on the 12th floor of the hotel’s annex building and provides sweeping views of the East China Sea.

Upon entering the restaurant, diners pass by the hotel’s striking infinity pool — which is, sadly, for hotel guests only. However, Kafuu Resort makes the perfect location for a staycation on the island, and a return visit as a guest will allow access to the hotel’s many amenities.

As soon as my companion and I walked into Ryukyu BBQ Blue during a recent visit, we were promptly greeted by the restaurant’s friendly staff. When making reservations, I had requested ocean view seats, and the scenery did not disappoint. From the restaurant’s tall windows, we took in the breathtaking view of the beautiful waters below.

The restaurant is decorated using Ryukyu glassware, a famous local handicraft, which provided an elegant Okinawan flair to the dining room.

Ryukyu BBQ Blue specializes in yakiniku — a type of Japanese cuisine where diners cook a variety of cuts of meat at their table upon a small grill. For those not interested in the novelty of cooking their own meal, the restaurant also offers an extensive menu with appetizers and entrees, as well as a hot buffet station at lunchtime.

I ordered the assorted meat platter (1,980 yen, or about $18), which came with different cuts of pork and beef, as well as some vegetables. My companion ordered the Motobu Beef Hamburg Steak (1,980 yen) and a bottle of locally brewed IPA (800 yen).

Hungry diners may choose the special lunchtime course (4,800 yen), which comes with lobster tail, assorted cuts of wagyu beef, roast beef and dessert. At dinner, pricier courses are available. There’s even a special dinner set for children, which includes kid-friendly menu items such as potato salad, beef and rice in smaller portions for 1,500 yen.

As we visited during lunchtime, both of our meals came with access to the buffet. Ryukyu BBQ Blue’s buffet contains many standard buffet dishes, including salad, fruit and dessert — but what makes this buffet special is its selection of Korean-inspired cuisine.

Diners can choose from popular Korean dishes such as bibimbap, a type of rice bowl with sauteed meat and various vegetables, and jjigae, a spicy tofu-based soup. Also available during my visit was Korean-style spicy calamari, meatloaf seasoned with lemongrass and Thai basil, and stir-fried cod. With so much food to choose from at the buffet, I nearly forgot about the yakiniku platter waiting for me at our table.

The meat on my yakiniku platter was delicious and not fatty, like many cheaper yakiniku cuts can be. Any fat on the meat rendered while cooking at the table, leaving behind the perfect amount of juice and flavor. The dish came with a side of leafy lettuce to be used as wraps for the meat, which is a popular method of eating Korean-style BBQ. My companion enjoyed her hamburg steak, too, which was served on a hot stone plate that allowed her to cook the steak to her preference.

With a delicious meal laid before us and an amazing view just outside the window, we could not ask for a better setting for lunch on a Sunday afternoon.

DIRECTIONS: From Kadena Air Force Base, exit the installation from Gate 1 and turn right onto Route 58. Drive for approximately 18 km. Kafuu Resort Fuchaku will be on the right, just before the Sheraton Okinawa. Ryukyu BBQ Blue is located in the resort’s Annex building.

COST: During lunchtime, a variety of entrees such as a roast beef bowl (1,800 yen, or about $16.30) and Korean cheese dakgalbi (2,000 yen) are available and include access to the buffet. Yakiniku courses are also available and start at 1,900 yen. At dinner, guests can dine a la carte (small plates start at 700 yen) or choose a yakiniku course (starting at 4,800 yen).